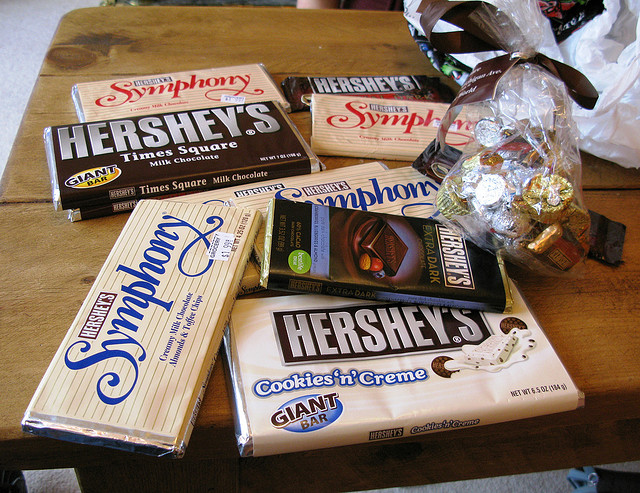 On Tuesday afternoon, we learned that the Hershey Company (NYSE:HSY) plans on raising prices for its products across the board an average of 8 percent. The irony is that this announcement was made just hours after Federal Reserve Chair Janet Yellen claimed that there is very little inflation in her testimony to Congress.

Hershey, however, is seeing the prices of raw materials from cocoa to packaging rise to the point where its margins are compressing. In order to compensate, the company plans on raising its prices. However, this is not going to be enough to meaningfully impact the company’s 2014 earnings figures, as the price increases will be introduced gradually. It will have its full impact in 2015.

I still think that there is more downside in Hershey shares. Investors might like the fact that the company is raising prices. While Hershey has a very strong brand, consumers are always put off when they see the prices of things they buy rise. Now this effect is bigger for some companies than for others. Hershey should be relatively unscathed given that it is raising its prices from a relatively low point in the first place: a chocolate bar isn’t exactly a major purchase. But we should also note that Hershey products are often purchased by children who generally don’t have much money. With this in mind, I suspect that we could see a small decline in product sales.

But more importantly, the reason I am avoiding the stock is valuation. Hershey shares trade at over 25 times earnings, which is expensive to begin with. While the company is growing its sales and its profits, this growth has been decelerating over the past couple of years, and this could be a factor leading to the stock’s 12 percent decline from its peak. Investors had been in Hershey shares for the growth — the company grew its earnings and the stock soared, and now the growth is decelerating and the stock is declining. Now we have this added risk factor of increasing prices, which again could wind up alienating consumers.

These two risks make the stock unattractive at the current price. However, I think investors should keep this stock on their radars. Hershey is a solid company with an industry leading brand name. It is the kind of company that will almost certainly grow its cash-flow per share over a long period of time, and for that reason, it is the kind of stock that retirement and income investors should consider buying on weakness.

But how much weakness is enough? This is a difficult question to answer considering that the value of the company’s earnings is largely contingent on interest rates. With interest rates so low we can make the case for paying 20 – 23 times earnings for a company such as Hershey, and this would mean that the stock is almost low enough to consider. But in the event of an interest rate spike such a price to earnings multiple seems high, and the stock could have more downside.

With these points of uncertainty — margins, growth, and interest rates — all of a sudden Hershey seems to be a somewhat risky stock, and one that isn’t so easy to value. So for now, I am staying on the sidelines. If the shares move low enough or if we see some sort of positive development I will certainly reconsider, as I am always interested in owning shares of companies with valuable brands and consistent cash-flow streams.

Disclosure: Ben Kramer-Miller has no position in Hershey.