3 Disturbing Facts About Volunteering in America

Volunteering is held in high esteem in the United States. It’s the backbone of support for countless nonprofits and is viewed as a good use of personal time. Volunteering can boost the efforts of many programs, from food drives to tutoring and fundraising, not to mention creating personal connections with others in the community. Many colleges place a high emphasis on volunteering among teens who apply to their schools, and for many volunteering continues into other aspects of life.

For more than a decade, the rate of volunteering in America stayed around the same percentage: It fluctuated by about a million people here and there, but hovered between 28 and 26% of the entire country’s population, according to data kept by the Bureau of Labor Statistics since 2002. But in 2013, the rate dropped by 1.1%.

That might not seem like a huge decline, but it was enough to make several people concerned, including the writers at The NonProfit Times. While pointing to the drop in overall involvement, the publication also pointed out that funding for the top 30 events in 2013 had also gone down by 2.38%, a loss of about $44.2 million over the course of the year. Most of that drop was from three main events that raised less money in 2013: The American Cancer Society’s Relay for Life, the Susan G. Komen Race for the Cure, and Komen’s 3-Day Walk series all faced significant drops in funds.

There are a few reasons to be concerned about the lack of volunteers in the United States. For one, based on 2014 data, it seems like the drop in volunteering could be the start of a larger trend. Another reason is that certain subsections of volunteers, namely those with more education and likely higher pay, are also reporting fewer volunteer hours. However, it’s also possible to say that this could be a small blip in the overall scope of volunteerism in the United States: Volunteering rates stayed steady during the highest volume of unemployment in recent years, and still account for roughly one in four people giving some amount of their time over the course of the year. Though the numbers have dropped, that’s the same phrase that’s been used by most organizations to describe the state of volunteering in America for more than a decade. Either way, it’s important to pay attention to the state of volunteering in the country, because millions of dollars are saved each year by the work volunteers complete. 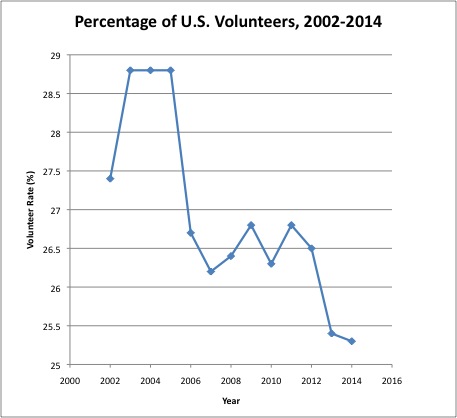 Graphic by Nikelle Snader//Data from Bureau of Labor Statistics

For 2014, the Bureau of Labor Statistics reported that 62.8 million people volunteered their time in some way from September 2013 to September 2014. The rate compared to 2013 was “little changed,” according to the report, and decreased 0.1 percentage points to an overall volunteer rate of 25.3%. That makes the volunteer rate the lowest percentage since the bureau began keeping track of the rate in 2002, and continues to reflect a drop that caused alarm last year. “You are talking about a lot fewer services being provided, needs potentially not being met,” said Ilir Zherka, executive director of the National Conference on Citizenship about the 2013 drop. “That should be cause for concern, especially if we see a slight downward trend over time. All the organizations and federal agencies who care about volunteering should care about that number.”

Another cause for concern among some people involved with nonprofit work is the decrease of highly educated people who are spending their time in volunteer opportunities. Nathan Dietz is senior research associate at the Center on Nonprofits & Philanthropy of The Urban Institute in Washington, D.C., and discussed the 2013 results with The NonProfit Times.

The most concerning aspect of the recent data to him was that the number volunteers within the demographic who had a bachelor’s degree or higher was dropping — and at a faster rate than the overall national volunteer rate. From 2009 until 2013 when the interview took place, the rate among that group went from 42.8% to 39.8%, a drop of about 3% overall, much higher than the 1.4% national drop from that same time period.

“This could be the canary in the coal mine,” Dietz told the publication as an indicator something is very wrong. “That number had been staple a long time and all of a sudden the bottom dropped out. Education is the single best predictor of volunteering. It’s people with a job and a good one,” he said. That trend continued for 2014: the percentage of people with at least a bachelor’s degree dropped again to 39.4%. 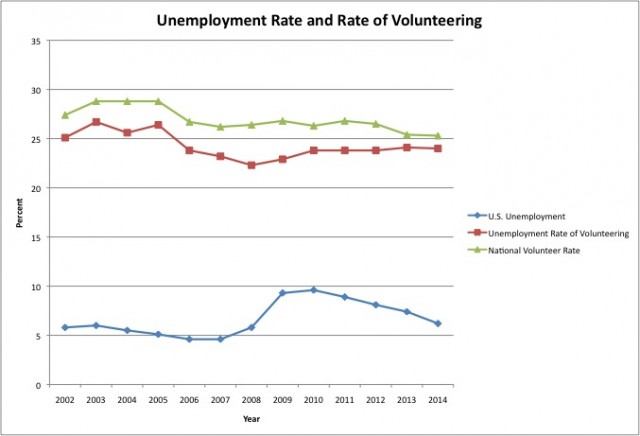 Graphic by Nikelle Snader//Data from Bureau of Labor Statistics

2. Volunteering unaffected by the job market

Though the declines in volunteering are concerning to some — and perhaps rightfully so — the overall trend hasn’t been affected by other national problems that have otherwise affected wide swaths of American life. For example, when the unemployment rate spiked from 5.8% in 2008 to 9.3% in 2009, volunteering overall increased from 26.4% to 26.8%. Among the unemployed population, the rate also increased between those years, from 22.3% to 22.9%.

That steadiness was no doubt appreciated by nonprofits during the height of the economic recession, and continues to be a valuable part of many organization’s operating procedures. Though some organizations find fault with putting a dollar figure on the worth of volunteer work, the median amount is normally estimated to be between $18.77 and $20 per hour. With an estimated 7.7 billion hours of volunteer work in 2013, the Corporation for National & Community Service estimates the value of that work was about $173 billion in 2013. 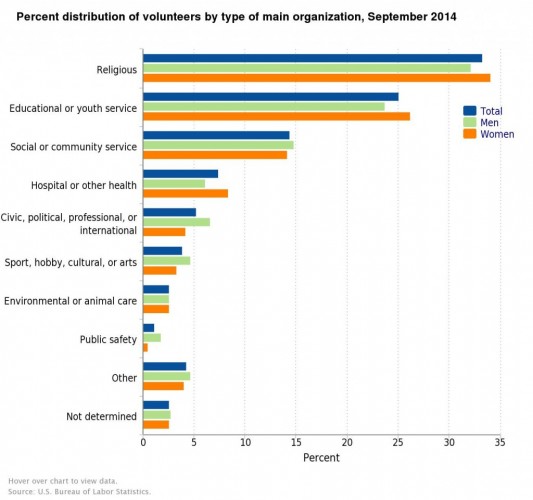 3. Volunteering: for better or for worse

So what does volunteering in America look like in 2014, besides the slight dip in overall involvement? Most volunteers spent their time with one or two main organizations — 71.4% cited just one main group, and 18.6% were involved with two groups. Volunteer involvement most often had some sort of religious context (33.3% of the time), but volunteers also spent time in educational or youth service opportunities (25.1%) and with social or community service organizations (14.4%). The activities in those settings was a wide variety of tasks, including coaching, collecting and/or distributing food, tutoring, and fundraising, to name a few. By age, the group most likely to volunteer was 35- to 44-year-olds, at 29.8%.

To some people, the volunteer rate in America should be viewed as glass-half-full. It’s what keeps the overhead for many organizations low, and many volunteers are likely to be civic-minded in other areas of life. (The Corporation for National & Community Service found that people who volunteer are almost twice as likely to donate to charity as non-volunteers). What’s more, the statistic that one in four Americans volunteer has held true since data collection began in 2002. It’s the phrase that the corporation has used for years, and executive director Wendy Spencer said she’s proud to see that hasn’t changed with time.

Spencer also pointed out that 138 million Americans, or 62.5%, reported being involved in informal volunteer activities in 2013, which included helping neighbors or watching over children. “Not everyone wants to be formally connected,” Spencer said. “We welcome spontaneous volunteerism.”