Why Chevron Is the Ideal Low-Risk Investment 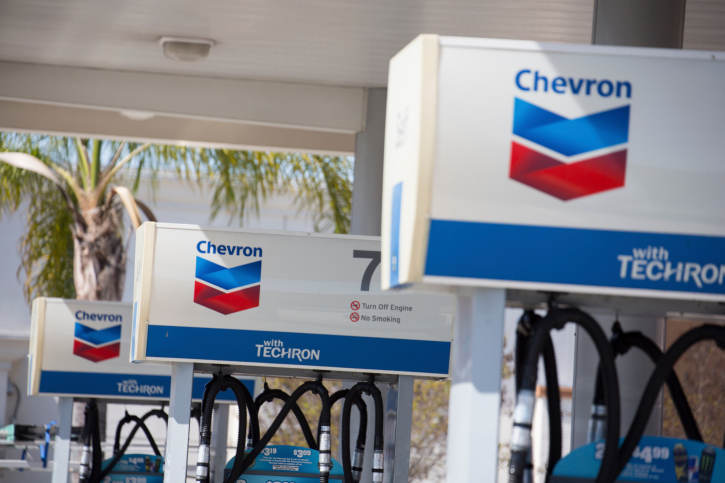 Over the past few years, value investors have almost unequivocally leaned toward Chevron (NYSE:CVX) as their favorite integrated oil stock among the other largest options:

It has been growing its profits and dividends rapidly while trading at a very reasonable high single digit to low double digit price to earnings ratio. However, over the past couple of quarters Chevron’s leadership seems to be waning. While the entire integrated oil space is experiencing stagnant profits, Chevron in particular is seeing sharper declines than its peers. Furthermore, we are also seeing the company’s production decline.

But is this a reason to sell? I think that if we take a closer look at the company’s numbers, and if we compare them to its valuation, we will find that Chevron is not as weak as the headline earnings figures might lead one to believe.

In the first-quarter, the company reported $51 billion in revenues versus $54.4 billion in revenues in the first-quarter of 2013 — this is a 6 percent decline. But while net profits declined from $6.2 billion to $4.5 billion — a 27 percent decline — the company’s gross profits actually grew slightly from $19.4 billion to $20.1 billion. The reason for the disparity was a huge spike in SG&A expenses, which should be a one time occurrence.

Furthermore, if we look at Chevron’s increase in gross profits, this is due to higher oil and gas prices. The decline in total revenue is due to a decline in production. But this decline appears to be the result of the company’s assets in Kazakhstan. This decline was attributed to poor weather, which should be a one-time occurrence.

In short, there is no denying that Chevron’s numbers were disappointing, but there was nothing in the company’s earnings report that indicates to me that there is anything permanently impacting the company negatively. This is why Chevron was able to miss earnings projections and report a 27 percent decline in net earnings and trade essentially flat on Friday.

Ultimately, Chevron remains an excellent value play, and provided that the aforementioned setback in Kazakhstan is a one-time event then I think the company’s uptrend is set to continue. Even with the earnings decline, the shares trade at just 12 times earnings, which is very inexpensive considering that the S&P 500 trades at over 20 times earnings.

Another appeal of Chevron shares is the company’s dividend. One of the positives that came out of the earnings release was the company’s 7 percent dividend increase. Now investors can expect Chevron to pay $1.07/share, which comes to a 3.4 percent yield. This is much higher than the S&P 500, which has an aggregate yield of just under 2 percent.

So long as the oil price remains strong, and assuming that the earnings decline in Q1 was due to one-time occurrences, Chevron remains an excellent investment. Investors who want to take a position but who are concerned about the company’s production in Kazakhstan should consider waiting for a quarter or two to make sure that production comes back on track. Assuming it does, we will probably see the stock trade up, but considering the current valuation and Chevron’s strong history of creating shareholder value this shouldn’t be a deterrent to those investors who are holding off on their Chevron purchases. As for investors who currently own a position, I think it would be wise to hold on. I wouldn’t buy more, but I’m not selling either.

Ultimately, the Q1 earnings report was weak. But at the same time this weakness is an aberration. Considering the muted market reaction investors seem to agree with this sentiment. Chevron remains an inexpensive and high-quality investment that is perfect for long-term, low-risk portfolios.

Earlier, we took a detailed look at one of Chevron’s rivals. Here’s a recap of our analysis of whether Exxon is a good investment right now:

Exxon Mobil, the world’s largest integrated oil and gas company, on Thursday morning released its first-quarter earnings figures. The company beat analysts’ estimates for earnings per share, which came in at $2.10 per share versus $1.88 per share estimates and versus $2.12 per share for the first quarter of 2013.

However, net income fell by over 4 percent to $9.1 billion, with the smaller fall in earnings per share resulting from the company’s stock repurchase program. The strength relative to analyst estimates was due primarily to the company’s higher realized sales from natural gas, which had a very strong first quarter before falling in price.

Revenue of $106.8 billion missed analyst estimates of $109.8 billion as a result of lower volumes from the company’s upstream business. The primary reason for the decline in oil production was the expiration of the company’s Abu Dhabi onshore concession, which is a onetime event.

The stock didn’t move much on the news, with shares down $1 each, or about 1 percent, although investors should keep in mind that the stock was due for a pullback given that it just traded at a new all-time high. Investors have been relatively positive on the integrated oil space, and Exxon Mobil shares in particular, for a variety of reasons, including:

In fact, regarding the last point, Exxon Mobil just announced a hike in its quarterly dividend from 63 cents per share to 69 cents per share, which is a 9.5 percent increase. The company currently yields 2.72 percent, which is about 50percent higher than the S&P 500.

More impressive is Exxon Mobil’s stock repurchase program, which is one of the most effective in the market without jeopardizing the financial stability of the company. True, many companies repurchase more stock than Exxon Mobil relative to their respective valuations, but oftentimes they borrow money in order to purchase these shares [e.g., Autozone, Lorillard]. In the first quarter, the company repurchased roughly $3 billion worth of stock.

Going forward, Exxon Mobil has several exploration programs throughout the world that should help it recapture its lost production from Abu Dhabi. These projects are, quite literally, located on every continent except Antarctica. Thus, while the company may be hurt somewhat by individual local events (e.g., Russian sanctions), it has the diversity in order to maintain or increase its production longer-term.

Furthermore, Exxon Mobil has a lot of natural gas assets, the value of which is finally being reflected in earnings. Recall that several years ago, when natural gas prices were falling, that the company bought out the natural gas company XTO Energy. While it received criticism for being too early (and this technically was the case), we are seeing the company’s higher natural gas exposure finally paying off.

The company continues to be the best allocator of capital among the integrated oil and gas companies, with a return-on-equity ratio nearing 10 percent and a return on investment exceeding 15 percent. This means that Exxon Mobil continues to be very conservative with its investments, and the capital it earns that it doesn’t invest, it is returning to shareholders through dividends and buybacks.

Ultimately, Exxon Mobil is a great long-term investment, and I have no intention of selling my stake any time soon. But at the same time, I wouldn’t add to it with the stock trading at over $100 per share and with the broader stock market trading at an all-time high. I would rather wait for a pullback. Nevertheless, when we start to see weakness in the market, Exxon Mobil is a stock I will be buying.