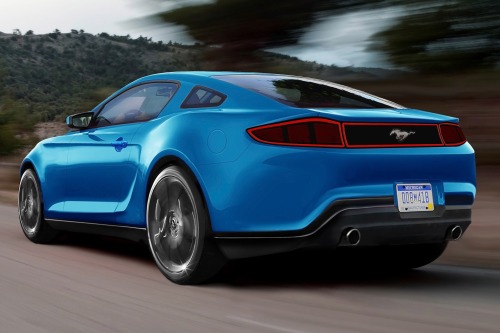 Crash diets may be a fad during bikini season, but muscle cars have always been able to avoid such concerns. Enter modern engineering and the EPA with its pesky modern fuel economy requirements. Both seem to be weighing on the 2015 Ford (NYSE:F) Mustang. Instead of bulking up and going bigger, the 2015 will slim down some 400 pounds, according to Edmunds. Maybe 50 really is the new 30 for Ford’s reigning track burner.

An inside source told Edmunds the 2015 Stang will tip the scales at least 400 pounds less than the 2014 model does by becoming narrower and shorter, as well as through the use of lighter materials. In fact, the source told the car site that better engineering would pull off most of the weight loss without sacrificing feel or performance. Nor will it affect the price of the base model. Fuel economy was considered a major factor behind it.

As the Edmunds report noted, automakers have to keep raising fuel economy ratings 4 percent every year through 2025, which has automakers scrambling to make up some ground in this category. GM (NYSE:GM) recently found itself the object of unenviable press when the automaker notched 6 of the top 10 worst-performing rides from the cost-per-mile perspective. Yet, GM has upgraded in this department with the 2014 Corvette Stingray.

The forthcoming Corvette will get an EPA-estimated 29 mpg highway, according to sources. That figure bests the current Corvette figures of 26 mpg by a considerable margin (more than 10 percent). The number is significant since automakers have to take into account the entire period until 2025. How many more re-designs will they be able to pull off that improve the economy of the fleet by then?

For its part, Ford was already in the news this week for fuel economy issues. The 2013 C-Max Hybrid was found to be performing significantly worse than expected on the road, forcing Ford to drop its estimate from 47 mpg to 43 this week. As Forbes reported, the automaker did so voluntarily, and will offer cash back to both buyers and lessees of this car, which number over 30,000. It seems Ford will reverse that trend in fuel economy with the 2015 Mustang, of all cars.