Why It’s OK That Companies Are Dying Faster Than Ever

As in all healthy cycles of life, businesses have moments of life and death. One company is edged out of competition, giving way for a new competitor to come on to the scene and attempt to improve upon previous business models. Death, though not quite as guaranteed for businesses as it is for individuals, is viewed at the very least as a distinct possibility. It’s becoming even more of a reality for companies, as several analyses show that the lifespan of American firms has drastically decreased from a few decades ago.

The lifecycle of a successful company in America used to be much longer. Now, the emphasis is shifting from the duration of how long a company is in operation to the possibilities of what happens to that firm after it’s bought, merged, or dies a slow death in bankruptcy court. According to an Innosight study conducted in late 2012, the average lifespan of a firm was 61 years in 1958. That lifespan diminished to an average of 25 years in 1980, and at the time was at an average of 18 years. The companies that now make up Standard & Poor’s top 500 firms are a revolving door. The value of the S&P 500 might not fluctuate dramatically from year to year, but the names of the companies on the list do. If the churn rate continues at the pace it is at now, 75% of companies listed on the S&P 500 in 2012 will have been replaced by 2027. 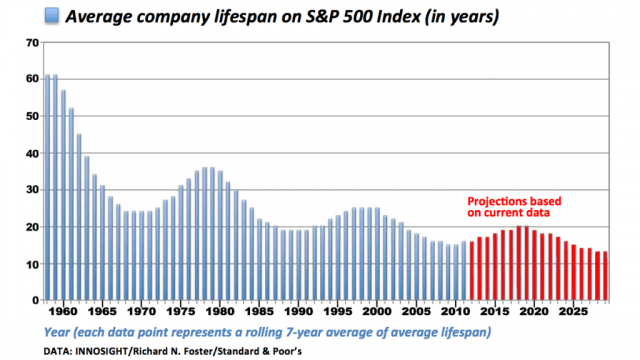 While this could look concerning to people, some experts say embracing this rapid churn of companies is a good thing. Innosight’s lead director, Richard N. Foster, advocates for the idea of “creative destruction,” and even co-authored a book of the same title about the rapid changes in business today. The term was first coined by Joseph Schumpeter, an economist who called the process “the essential fact about capitalism.” The theory of the process is that new innovations will begin to trump old ones, thus continuing a cycle of an ever-evolving business lifespan. If a business can’t adapt to changing needs of consumers or its own operations, it will either be swallowed up by a new company, rebooted for a new focus, or left to die.

In an atmosphere where a company on the S&P 500 is replaced every week or so, it might seem like there’s cause for worry about instability — especially since the churn rate has increased so much since 30 or 40 years ago. But instead of birth, survival, and death as the only options for a company, there’s now an enormous opportunity for reincarnation with the business world, with the primary vehicle being mergers and acquisitions. 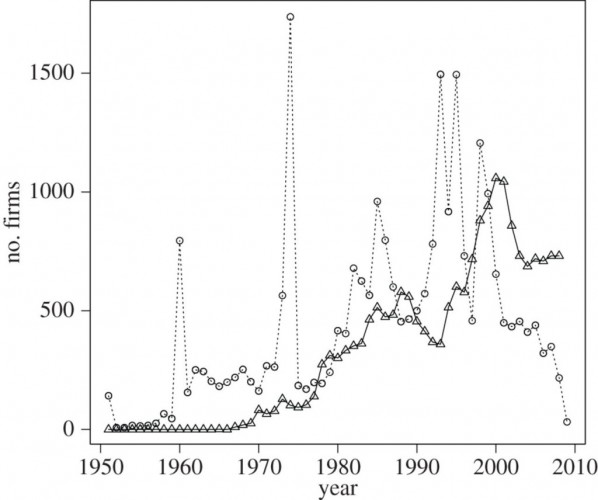 The birth rates (denoted by circles) and death rates (triangles) of companies over time, from 1950 – 2009. Source: The Royal Society

A new study distributed by The Royal Society shows that of the causes of company death between 1950 and 2009, 45.1% of them were because the company morphed into another existing firm through such mergers. Out of the 25,000 or so firms analyzed, bankruptcy accounted for just 4.5% of company deaths, meaning numerous firms found new life in other formats. “This is an important point because it associates death events with organizational splits and mergers that may make sense in the light of the structure of transaction costs, rather than the failure to be productive and disappear,” the study states. Though its success has yet to be determined, RadioShack is an excellent example of this trend in action. The company was seemingly dead in the water, though it has been resurrected out of bankruptcy court and is trying its hand at being a commodities supplier, particularly in smaller markets.

One interesting finding from the study is that the mortality rate for any given public firm is not dependent upon how old that company is. Conventional wisdom says that newer companies are more likely to go belly-up as they attempt to survive on the trading floor soon after going public. The study does point out one apparent flaw, however, in that its formulas can’t explain why companies that are hundreds of years old in some countries like Japan are able to persist. In the model developed for the study, it would be statistically impossible for any companies to survive after 200 years, even if the number of firms included topped 1 trillion. In order to reconcile those two conflicting facts, the study authors suggest more research on firms with longer lifespans.

For the nostalgic at heart, it’s likely still concerning to see classic brands get folded into new companies or cease to exist altogether. The problem with keeping the old, Foster said in a Forbes interview, is that the “legacy costs” bog down companies and don’t allow them to change and adapt to new consumer needs. Old priorities aren’t driving those companies forward, and if the market deems them a failure for becoming entrenched in one place, the company either moves forward by joining another, more successful company or by calling it quits altogether. “Markets are better at creation than any individual company, and they are much better at destruction. A company cannot perform better than the markets that are adapting more rapidly – it’s just a fact of life,” Foster said.