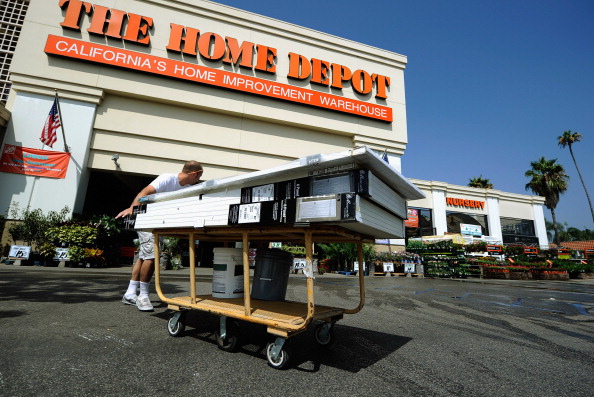 Home Depot (NYSE:HD) shares have had quite a run since the stock market bottomed in 2008-2009. In fact, the stock traded below $20 percent share in October 2008, while they currently trade at $80 percent share. However, now might be a good time to sell. For the past year, the stock has been range-bound. It has been a buy in the low- to mid-$70s and it has been a sell above $80. But if you look at the longer-term trend, what we have is a large run-up from 2008 through the first part of 2013, followed by what appears to be a topping pattern.

This pattern goes beyond the share price. One can find it in the fundamentals, as well. In short, Home Depot’s earnings growth has been slowing down considerably. This isn’t so apparent when you look at EPS growth because the company has been repurchasing a lot of stock. EPS growth last quarter was about 20 percent, and in previous years it has been about 25 percent. But earnings growth was just 12.5 percent year over year in the past quarter when in the previous year it was 18.7 percent. That’s rapid deceleration.

Sales growth is even less impressive at just 3.1 percent year over year in the most recent quarter. While the company should be applauded for raising its profit margin last quarter when many retailers struggled to do so, one has to question whether this is sustainable. Retail is a cutthroat business, and retailers are suffering as commodity prices are strong. Furthermore, this growth rate is down considerably from 5.3 percent in the most recent year.

So the stock is rolling over, the company’s growth is decelerating, and there are macro-economic headwinds. While the company reported “robust” May sales, the fact remains that the country saw a contraction in GDP in the first quarter of negative 1 percent. This has failed to put any pressure on equity markets, which are at all-time highs, but there is little doubt that there is economic weakness that can impact an economically sensitive company such as Home Depot.

Furthermore, the Federal Reserve is tapering its quantitative easing program, and this means the Fed will be buying fewer mortgage bonds. This will put upward pressure on mortgage rates and downward pressure on real estate prices, and this in turn will give people less of an incentive to fix up their homes, as they tend to do before selling them. We can already see beginning signs of weakness in the housing market, with homebuilder stocks declining in the first few months of 2014. So far, the SPDR Homebuilders ETF (NYSEARCA:XHB) is down more than 5 percent for the year.

Finally, despite all of these headwinds, analysts are very positive on the stock. On average, they have a “buy” rating on Home Depot with an $88 per share price target. Furthermore, the average analyst believes the company will earn $4.84 per share in 2015 versus the company’s trailing 12-month earnings of just $3.92 per share. That is an incredible amount of growth to assume, especially for a company that has seen definitive signs of decelerating growth. It should come as no surprise, then, that there is not one analyst surveyed by Marketwatch who has a “sell” rating on the stock.

When everybody believes one thing about a stock, commodity, or any sort of market, it is often a good idea to consider the contrarian viewpoint. After all, if all of these analysts are bullish there aren’t any left to buy, but there are plenty that have shares to sell.

With these points in mind, I think now is a great time to sell Home Depot.