Why More Jobs Could Come Back From Overseas 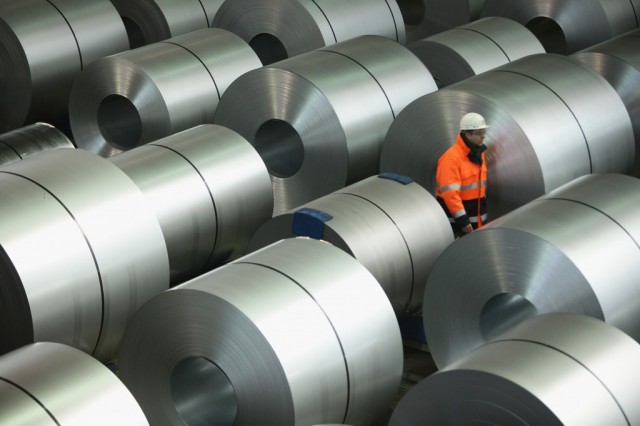 For decades now, the American middle class has stood idly by as millions of jobs have been outsourced to foreign countries. Globalization and the ubiquitous cheap labor found in Central and South America, as well as Asia, have led to a mass exodus of manufacturing and factory jobs out of the United States. As a result, millions of American families have had to make do by adapting, or fighting it out over what few jobs remained.

While this has more or less been the story for quite some time now, there is reason for optimism — particularly in economically ravaged regions of the Midwest, where manufacturing represented the backbone of the economy.

That optimism comes courtesy of the fact that U.S. manufacturing costs are becoming less expensive, or at least falling more in line with those in countries like China. Fortune dug through the numbers to find that expenses to manufacture goods in the U.S. are now only around 5% higher than they are in China, and are between 10-20% lower than in many European markets. On top of that, Fortune also cites projections from The Boston Consulting Group, which estimate China’s cost advantage may shrink to as little as 2-3%.

What that means is that shipping jobs to China suddenly doesn’t have the allure it once did, and the costs of setting up overseas manufacturing is reaching the point where it’s not worth the investment. That means that more manufacturing jobs could remain stateside.

“A 5% price discrepancy in manufacturing between China and the U.S. doesn’t amount to much,” BCG’s David Gee told Fortune, “when you consider that U.S. manufacturers face the risks of delay when shipping from China, the threat of port strikes, and the local investments and partnerships that Beijing often requires of foreign companies doing business there.”

While that sounds promising for American workers, it may not be the panacea the post-recession American economy has been hoping for.

Going by the numbers alone, the economy has regained traction since the recession ended in 2009-2010. The unemployment rate has fallen back down to 5.3%, and the stock market has hit record highs. But there are still several big issues plaguing the economy at large — most notably, stagnant wage growth, and mounting levels of student and personal debt.

Jobs have returned for the time being. But even if manufacturing jobs, which have been shipped overseas for the past couple of decades, do return and remain in the U.S., they won’t be the same as they were in the 1950s and 60s. That is, they likely won’t pay at the same level, or allow for the same luxuries they once did. There are a couple of reasons why, including the decimation of unions across traditional manufacturing centers in the Midwest, and the advent of artificial intelligence, or automation.

That’s what’s really at the heart of the issue. Even though America has found a way to become more competitive in terms of cost-advantage for manufacturing companies, it has come at a price. And it doesn’t necessarily mean that the jobs will be coming back from overseas. Instead, it may signal a future in which the jobs simply disappear altogether — from both the Chinese and American economies.

An interesting detail from Fortune’s findings involve just what, exactly, has helped the U.S. regain some competitive advantage. Fracking, it turns out, is the culprit, even though the energy production sector itself has been thrown into upheaval by the drastic dropping of energy prices over the past year. Though oil and natural gas production led to a spike of economic activity in places like Texas and North Dakota, the jobs those fields created have started to dry up as well.

What does this mean for Americans hoping to see a spike in manufacturing hiring? It’s somewhat unclear at this point. It’s definitely a good sign that manufacturing costs are dropping enough to entice American and foreign firms to keep jobs stateside, but even those jobs will only exist until it becomes cheaper to automate them — which could be soon.

In short, don’t hold out hoping for the old economy to return.