Why Prescription Drug Prices Have Doubled in 5 Years

If you’re a middle or lower-class American, you’ve probably felt like you’ve been living in a vice grip for the past several years. Though the economy is on rather sound footing, most of us are still feeling the squeeze. Rent and home prices are going up, as are other living expenses, yet wages and earnings growth are still flat. We’re losing purchasing power, and add in a large, structural change to how healthcare is bought and paid for in the United States, and you’ve got one more area where costs are in flux.

Unfortunately, though we have superior technology, economies of scale, and investment, health costs are still a huge hammer nailing American wallets. And if you need proof, consider this: Prescription drug prices alone have doubled over the past five years.

That doesn’t make a lot of sense, at first. Given our technology and ability to produce more, shouldn’t costs be going down? Well, when you live in the same world as Martin Shkreli, things don’t always follow an assumed path.

The data detailing the ascent of drug prices over the past half decade comes to us via the annual Drug Trend Report, released by Express Scripts Holding Company. Obviously, the headline figure in this year’s release is the finding that drug prices have shot up considerably over the last five-year period, but there are some other eyebrow-raising statistics that show just how rapidly prices are rising. One example is that U.S. spending on drugs overall went up by 5.2% in 2015 alone.

But here’s the good news: that 5.2%? It’s only half the rate that was seen in 2014. So, that could indicate a slowdown in expenditures and rising prices. Still, it’s hard to grapple with the fact that many drugs are now twice as expensive as they used to be, while most American families haven’t been able to make up for it with wage increases or by finding better jobs. In other words, the squeeze is on.

This chart, pulled directly from the report, showcases the real issue at the heart of the drug price spike: 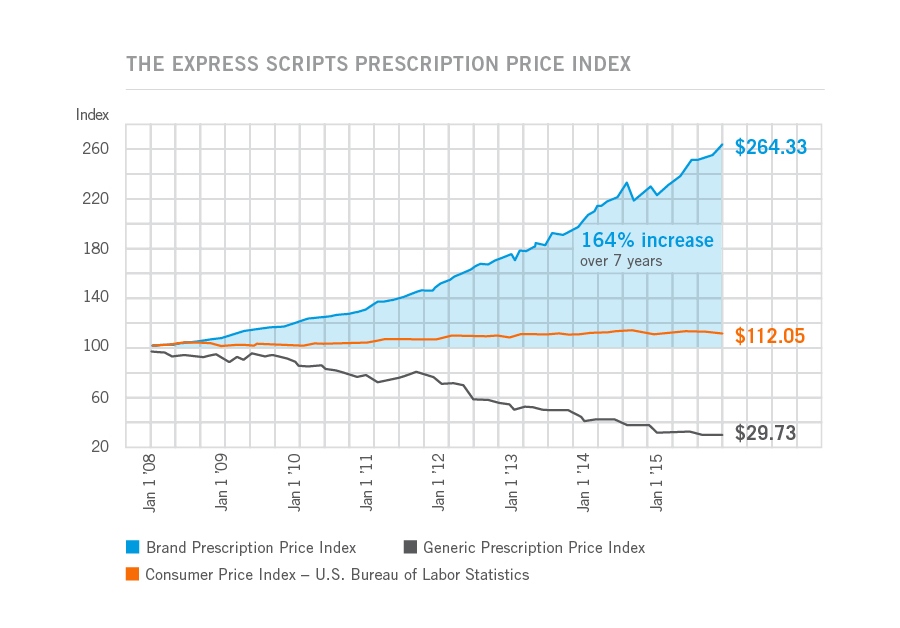 As you can see, between 2008 and 2015, there has been a 164% spike in prices for brand-name prescription drugs. That figure is wildly out of sync with the Consumer Price Index, which is more or less a pulse-reading on prices all across the economic spectrum. Compared to the CPI, which has gone up roughly 12% per this graph, prescription drugs have gone up more than 150% in price compared with everything else.

But if you look at the final line – the generic prescription price line – you’ll see that prices have actually dropped by a considerable margin. Roughly 70%, to be exact. That’s good news for the average American household. The difference, clearly, has been confined to brand-name medications and drugs. That may not come as a surprise to anyone who has been bombarded with advertisements for prescription drugs on television or social media.

The question at the heart of the issue here is this: what, exactly, has caused this to happen? Unfortunately, there isn’t an easy answer. Many would point to the Affordable Care Act as the main culprit, while others would say that price gouging by drug and insurance companies is to blame. Neither of those is wrong, exactly. But they’re not correct, either. Obamacare has actually slowed rising healthcare costs, to some degree, but has also thrown some extra sand in the gears of the market that may have had unintended consequences.

As for monopolistic business practices, and gouging? There’s definitely been some of that as well. We’ll point you back to the case of Martin Shkreli, for example.

The report itself even says “the industry faced opportunistic manufacturers who exploited monopolies with old generic medications and captive pharmacy arrangements, and ongoing scheming by compounding pharmacies to promote sales of high-priced, no-value compound medications.” It’s pretty obvious that some shady business practices are a part of the equation.

But in terms of saving your money, your best bet is to stick with generic drugs, when available. Regulators will need to step up to stop artificial price hikes and gouging, and consumers will need to remain on-guard when it comes to health care spending.