Why So Many Americans Are Choosing Credit Unions These Days

Many also argue credit unions are more secure because money and loans stay in the community, rather than being shuffled around to questionable lenders. Another appeal is credit unions are not-for-profit and consider their members partial owners of a cooperative. Americans began moving their money to credit unions in great numbers after the financial crisis, especially when the Occupy Wall Street movement sparked an event called “Bank Transfer Day.” On November 5, 2011, roughly 600,000 U.S. consumers moved their money from big banks to community banks or credit unions, largely in protest of Wall Street’s misdeeds. 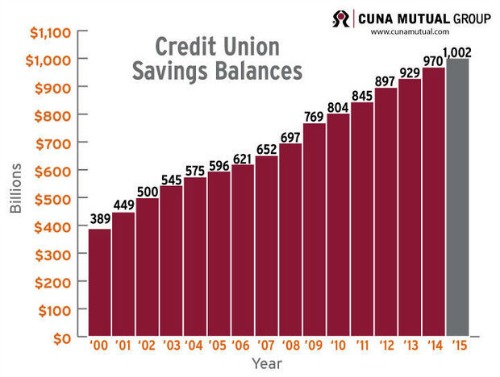 Credit union balances rose above $1 trillion in March 2015, but the report’s authors expect this figure to fall in April as members pay their tax bills. March is one of the strongest months for savings growth due to tax refunds and bonuses, so the timing on this savings jump is not surprising. Credit union savings balances grew at a 5.5% seasonally-adjusted annualized growth rate, which CUNA Mutual attributes to low gas prices, rising household income, job growth, and increasing membership.

According to a 2014 Harris Interactive poll, credit union members represent a third of the U.S. population. CUNA Mutual found that credit union memberships also grew at a record pace in the first quarter of 2015. Memberships increased by 496,000 in March to reach 102.8 million. The annualized membership growth rate is now 4%, CUNA Mutual reported, the highest rate since March 1997. During the last year, loan portfolios increased 10.6% and credit union loan delinquency rates fell to 0.74% in March, the lowest rate since 2007. Used and new auto loan balances grew as well, at 14.9% and 24.2%, respectively. The reported rate of growth for new auto loan balances was the fastest pace on record.

“Credit union members are an extremely close proxy for the American middle-market consumer, and this report goes beyond sentiment data to demonstrate that these consumers are feeling better than they have in quite some time,” said Steven Rick, CUNA Mutual’s chief economist. “The savings and lending growth that we’re seeing in the credit union landscape speaks to rising economic confidence.”

Despite all the good news for credit unions, the actual number of credit unions has been steadily decreasing. As of March 2015, 6,424 credit unions were in operation, according to CUNA Mutual. That number has fallen by 311 in the last 12 months. During the first quarter of 2015, the number of credit unions fell at the fastest pace since 2002. It’s the smaller credit unions that seem to be disappearing or being swallowed up, and some economists say a lack of technology is the primary cause. In 2013, Linda Sweet, a witness for the National Association of Federal Credit Unions, urged Congress to ease the regulatory burden on credit unions, which she referred to as a “tidal wave” of uncoordinated rules from multiple regulators.

CUNA Mutual had this to say about the shrinking number of credit unions: “Greater regulatory compliance burdens from the Consumer Financial Protection Bureau, CFPB, will put additional downward pressure on credit union non-interest fee income and will therefore accelerate the number of mergers over the next few years.”

Nevertheless, large credit unions, and many of the small ones as well, continue to see great success in the post-recession economic climate. According to Linda Jekel, director of credit unions for the Washington Department of Financial Institutions, every state-chartered credit union in the Seattle area is seeing growth. In fact, Seattle is the number one city for credit union growth, based on data from Nielsen Scarborough. 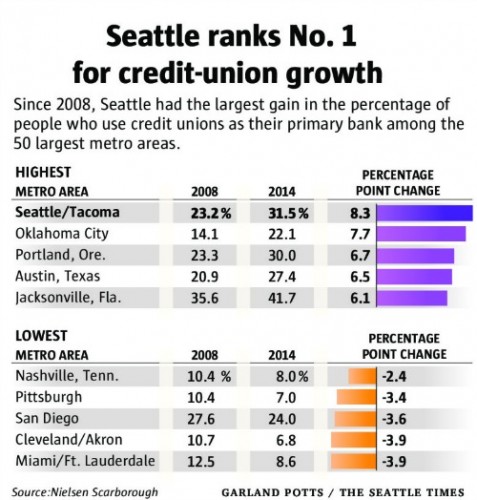 Of the 50 largest metropolitan areas, Seattle-Tacoma had the largest gain in the percentage of people primarily using credit unions. A record 31.5% of people in the Seattle area used a credit union as their primary bank in 2014, compared to 23.2% in 2008. Jekel says Seattle residents want to know who they are doing business with, and one appeal of credit unions “is that their deposits are being loaned out to their neighbors and the community,” as opposed to ending up on Wall Street or overseas.