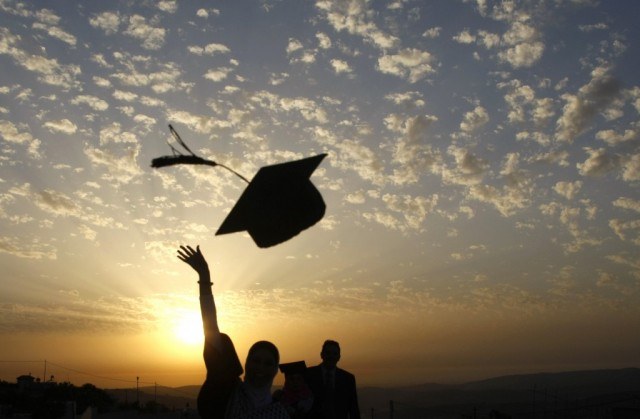 It’s hard to hold the bushy-tailed, bright-eyed optimism of younger generations against them. Coming fresh from the ranks of high school or college, hordes of young adults enter the labor pool every year with an eagerness to learn, adapt, and ultimately start earning a living in order to purchase a home or start a family. They haven’t yet had their hopes and dreams dashed by a bleak economic reality or one of the many curve balls life tends to throw.

The class of 2015 seems no different than those that came before it, in respect to its collective optimism. But unfortunately, it seems that the reaper will have a full harvest of the graduates’ hopes once they hit the workforce and find out that the vast majority of new grads are entering what amounts to an economic cage match.

According to the 2015 U.S. College Graduate Employment Study from Accenture, the majority of this year’s grads feel not only that they are adequately prepared for the workforce, but that they are going to get an immediate jump on many of their peers in terms of wages. The issues facing the class of 2015 are nearly identical to those faced by the graduating classes in years before them, including a lack of well-paying positions and a fairly high level of underemployment.

The other big looming disappointment is in earnings. “Salary expectations are high. More than a quarter of this year’s grads (27%) expect to make more than $50,000, while only 17% of recent grads actually do so. In fact, 41% of recent grads are making less than $25,000.”

It’s clear that the latest crop of entrants to the labor pool feel that they are ready and deserving of good, decent-paying jobs, but all the signs indicate that they’re in for some bitter disappointment. Many students pouring out of the country’s colleges and universities have undoubtedly worked hard to attain their degrees or certifications, but as we’ve found out over the past several years, having a can-do attitude and being qualified are rarely enough to get you ahead.

As for the graduates expecting to make more than $50,000 fresh from the educational womb, there likely will be many who hit that goal. But the majority will probably end up settling for less. Of course, the class of 2015 is in much better shape than, say, the classes of 2009 or 2010, which entered the workforce at the height of the recession.

Despite a slightly sunnier economic forecast, there is reason for concern. Amid relatively high levels of underemployment by recent grads, there’s also the looming issue of student debt, which has reached record levels this year. According to The Wall Street Journal, the class of 2015 is set to be the “most indebted ever,” with roughly 71% of those graduating with a bachelor’s degree on the hook for student loan payments. The average debt this year tops $35,000.

“It’s unfortunate that college costs are going up and the student aid, the grants, are not going up at the same rate on a per student basis,” Mark Kantrowitz of Edvisors told The Wall Street Journal. “College is becoming less and less affordable, though it’s still just as necessary.”

In part because of that debt, a good portion of grads are anticipating that they will not be able to make it on their own right out of the gate. A recent report from MarketWatch cites research from Sallie Mae that claims about half of all new graduates expect to be taken care of, in some respects, by their family. It’s conceivable that neither the students nor their families prefer the arrangement, but facing a tough job market, it seems to be the responsible thing to do in many cases.

It’s not fun to rain on the parade of the class of 2015, but if Accenture’s survey is any indication, a lot of new graduates are in for a shot of reality once they hit the labor market. That’s not to say things could change, but tempering expectations, and planning accordingly (by possibly moving back in with the folks) can make a huge difference when starting a career.

So, new grads, have some cake, tighten up your resumes, and get ready for the job market. It’s going to be tougher than you think.