Why Your College Major Is More Important Than Enrolling

There’s a constant debate these days about whether or not a college degree is still worth the time, effort, and hard-earned money. In some cases, your life goals and desired job don’t match up with the need to attend a four-year college and spend thousands of dollars you don’t have on a degree that won’t help you all that much for your career aspirations. In others, a degree is necessary but perhaps doesn’t have to come from a “name brand” college.

The largest problem with this discussion is that it’s almost impossible to generalize the conversation. We can’t say that everyone should go to college, because there are plenty of well-paying jobs that don’t require a bachelor’s degree. But in some cases, a degree is unavoidable and even vital to finding a job in your desired field. There will likely never be one answer about whether college is the right decision for an entire class of students. Rather, that choice will have to be made on an individual level.

Thankfully, there’s abounding data that can help students and their families decide if college is the right decision for their future goals. By analyzing reports on college future earnings, the average student debt upon graduation, and figuring out your intended college major, you can do a lot to decide if it’s worth it to you in the long run. The good news is that information is never in short supply — there’s always a new report that can help you gain a little more insight into the college decision process.

Let’s refresh on some of the basics: The average student loan debt is continuing to grow. The number varies, largely dependent upon which type of college the students graduated from. But the Institute for College Access & Success estimated in 2014 that the average overall was $29,400. Another site, Edvisors.com, has said the average student graduating in 2015 could have an average debt load of $35,051. Either way, count on the fact that the debt load isn’t going to get any lighter in the next few years.

However, a recent report by the Georgetown University Center on Education and the Workforce found that despite those costs, it might overall still be worth the initial pain and payback period. Over the course of a lifetime of earnings, college graduates with at least a bachelor’s degree earned about $1 million more than their peers who started their careers without attending college. For some students, the thought of opening up one more textbook after high school is not worth it, especially if they know they can make a decent living in another field.

For those who are sure that college is for them, the Georgetown study finds that college major choice ends up having a greater influence on future income than the initial decision to pursue a degree in the first place. While the difference between high school graduates and bachelor’s degree holders is about $1 million in earning over their lifetimes, the difference between the highest-paid degree holders and lowest-paid professions can equal as much as $3.4 million.

In other words, if you care about earnings more than you care about what you’re actually studying, there’s data that shows which majors will likely return the most money for your investment. For some people, a passion in a certain field won’t yield the largest paychecks, but it’s worth it. In other cases, the Georgetown study offers some insight about which fields and specific professions have the most to offer in terms of eventual earnings.

The center analyzed career data from the U.S. Census Bureau about 137 college majors for the report, and found that some of the most popular degrees were also the ones with the highest paychecks. Business and STEM-related majors account for 46% of students’ majors, with starting salaries at $37,000 or more and moving to an average of $65,000 or more by mid-career. (‘Mid-career’ salaries in this report are classified as employees between the ages of 25 and 59.) 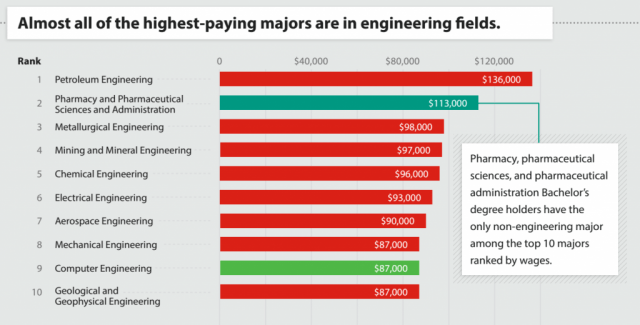 Source: Georgetown University Center on Education and the Workforce

The study also highlights some of the lowest-paying majors. In other words, these are professions you should choose only if you’re passionate about the area, and don’t mind if your paycheck is generally lower than that of other careers. With a bachelor’s degree, the salary of someone who majored in family and consumer sciences is around $45,000 by mid-career. Many of the career paths included majors in the liberal arts and the service industries, including drama and theater arts, studio arts, and social work. The lowest-paying major, early childhood education, yields a mid-career salary of about $39,000.

Though the initial bachelor’s degree does influence your expected earnings in huge ways, what you do with your career and attaining graduate degrees can also lead to more money than you might expect, the report shows. “We’ve known for a while that all degrees are not created equal, that your major has a large effect on your ability to get a job and work your way up a career ladder,” said Anthony P. Carnevale, the center director and the report’s lead author. “But a college major isn’t destiny. For example, the top 25 percent of humanities and liberal arts majors earn more than the bottom 25 percent of engineering majors.”

Reports like this one give reliable information that students and their parents can use to decide which post-high school decisions make the most sense in light of their personal goals and desired earnings. There won’t always be a clear answer, but unless you already know exactly what you want to study and where you’re going, these types of conversations can help you make the best decision possible.