Wild Photos of Celebrities and Their Cars in the 1970s

When most people think of the ’70s, they think of bell bottoms, big hair, and excess. But in reality… actually, we’ve got nothing. The ’70s were all about bell bottoms, big hair, and excess. And no one was living it up more than celebrities. The ’80s may be known as the “Me Decade,” but after the turbulent ’60s, people were already starting to let loose.

Of course, a big part of living the good life is driving something that looks the part. Here’s a look back at those wild times, with some of the biggest celebrities in the world and the cars they loved. 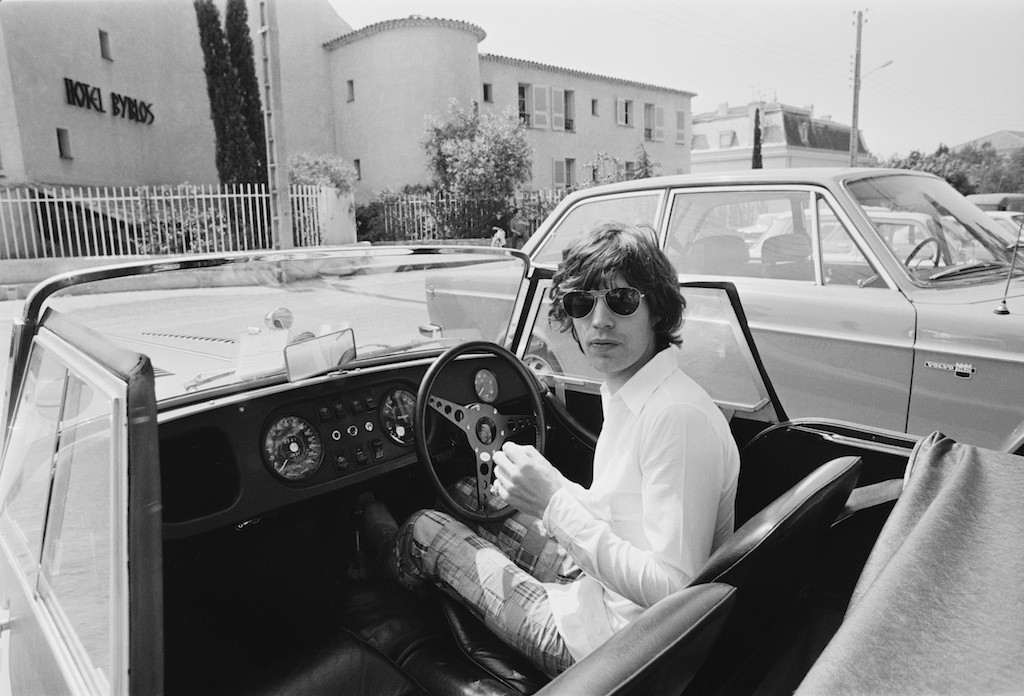 In the early ’70s, Mick Jagger and The Rolling Stones were at the top of their powers. On top of jet-setting and selling out arenas around the world, they were recording seminal albums like Sticky Fingers and Exile on Main St. Somewhere between all of that, Mick was able to vacation in the south of France. Here he is behind the wheel of a Morgan, a wood-framed, British-built sports car. Aside from an interruption during World War II, the Morgan has been in constant production since 1936. Amazingly, the modern Morgan isn’t all that different from Mick’s car here.

Next: A vehicle that’s literally out of this world 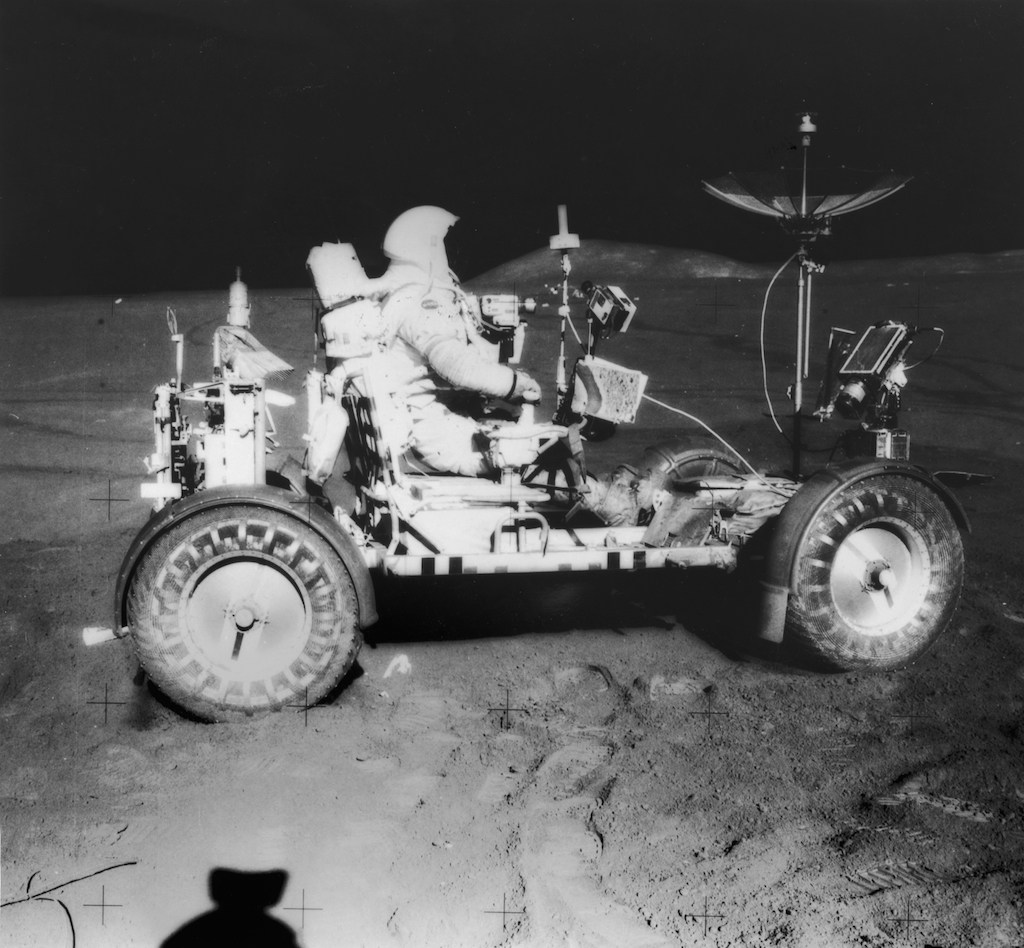 28th August 1971: US astronaut, Commander of Apollo 15, David Scott seated in the Lunar Rover after completion of extravehicular activity (EVA) is returning to the lunar module ‘Falcon’ with samples of rocks and soil. | NASA/Central Press/Getty Images

The name might not ring a bell, but the car probably will. For the final three Apollo missions to the moon, the crew brought along the Lunar Roving Vehicle, or LRV. Built by Boeing, the Lunar Rover became an icon as soon as it touched the surface of the moon and carried astronauts further from their landing site than they would’ve been able to go on foot. Here’s Apollo 15 Commander Dave Scott piloting the Rover on August 28, 1971. Scott had the distinction of being the first man to drive on the moon.

Next: A car fit for music royalty 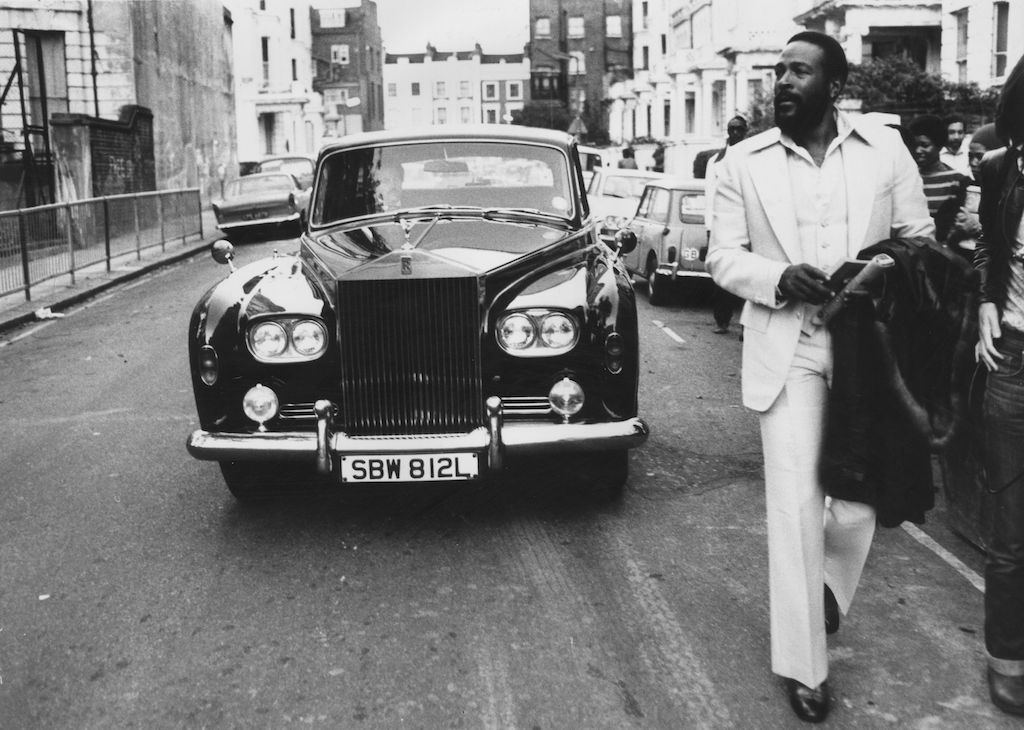 By the mid-1970s, Marvin Gaye had been a soul icon for over a decade. Far from his hometown of Detroit, here he is at the top of his powers in London, having just exited a Rolls-Royce Phantom VI. The most opulent Rolls of the era, the Phantom VI was the car of choice for royalty, celebrities, and the ultra-rich from 1968 to 1990.

Next: An iconic Bond car 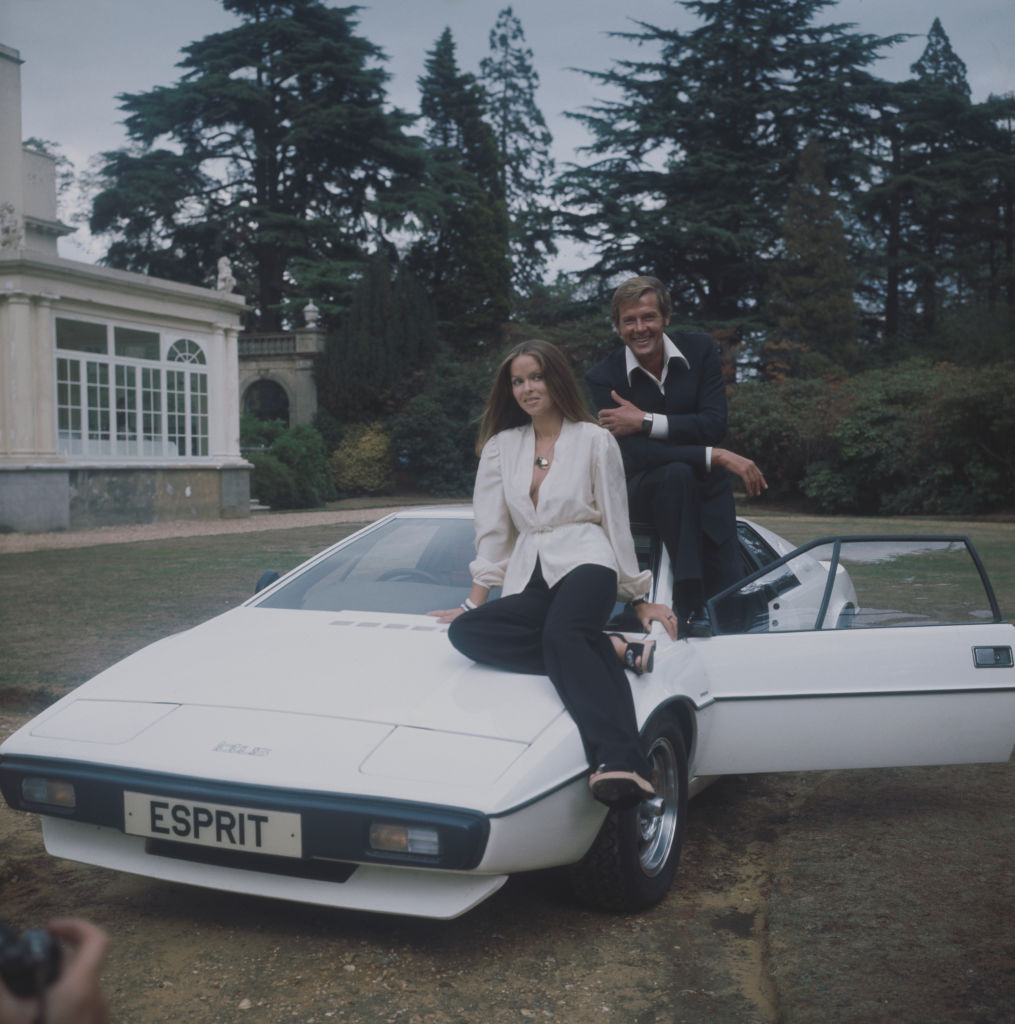 By the 1970s, Sean Connery and his Aston Martin DB5 were long gone, replaced by Roger Moore’s James Bond and a host of ’70s-tastic cars. Moore’s Bond was a lot more fun (and campier) than Connery’s serious portrayals of 007, and as a result, his movies are generally more lighthearted. The most recognizable Bond car of the era is this Lotus Esprit from 1977’s The Spy Who Loved Me. Along with actress (and wife of Ringo Starr) Barbara Bach, the Esprit’s transformation from sports car to submarine in the film is still a highlight of the entire Bond franchise. Today, Tesla chief Elon Musk owns the Lotus-based submarine used in the film.

Next: A famous ballplayer and his Dodge Charger

Not only was Roberto Clemente one of the best hitters in baseball history, he was a role model to generations of fans, and a selfless humanitarian. For his key role in the Pittsburgh Pirates defeat of the Baltimore Orioles in the 1971 World Series, Clemente was given a brand-new Dodge Charger along with the World Series Most Valuable Player Award. Built from 1971 to 1974, the third-generation Charger was the last of Chrysler’s fast, high-displacement muscle cars. At least until the 21st century.

Next: The decade’s favorite TV detectives

They may not be household names anymore, but in the mid-’70s, their starring roles on Starsky & Hutch made them two of the coolest actors on the planet. And while the hip threads, wild characters, and car chases were reasons to tune in, the real star of the show was their car, a red 1975 Ford Gran Torino with a white stripe down the sides. In reality, the ’75 Torino was kind of a terrible car. But we can’t deny that it looked amazing on the show.

Next: A controversial star with an unassuming car

After becoming one of the biggest (and most controversial) stars of the late ’60s, Jane Fonda spent much of the 1970s involved in political activism. Before her big comeback as a 1980s-era workout guru, she’s seen here in 1975 stumping for her husband, former ’60s radical Tom Hayden’s unsuccessful U.S. Senate run. And while she may have been Hollywood royalty, her car was an unassuming Ford Pinto.

Next: The next car played a part in one of the most controversial moments of David Bowie’s career. 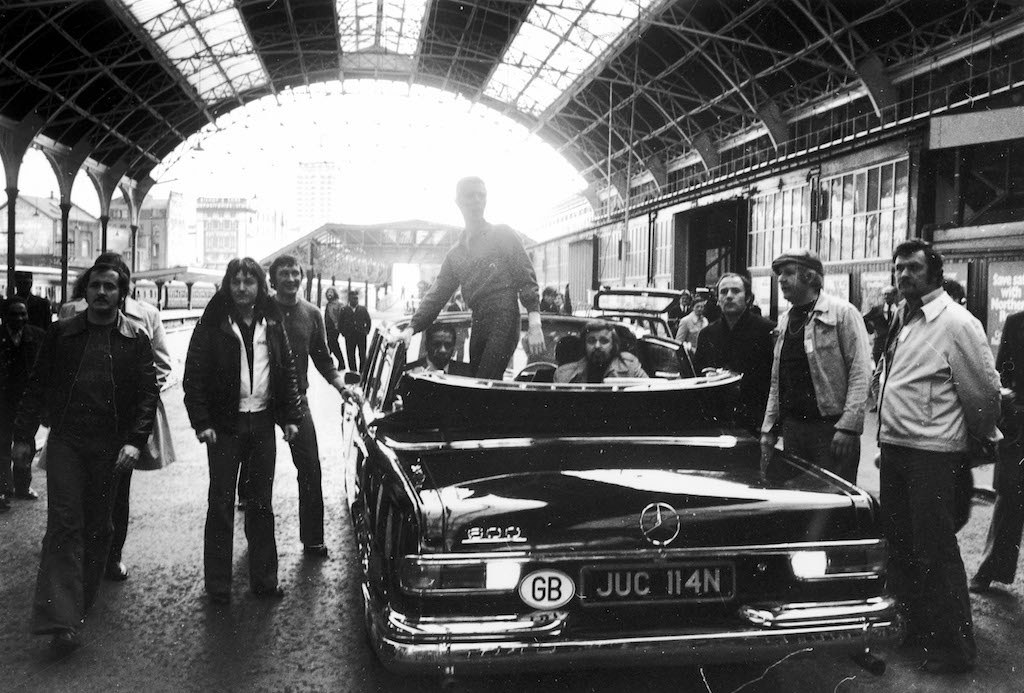 In 1976, David Bowie was one of the biggest rock stars in Europe. And while this photo doesn’t look like much, it was taken seconds before one of the most controversial moments of his career, which became known in the press as the “Victoria Station Incident.” After the launch of his album Station To Station, he made pro-fascist comments in the press. Then, returning to England, he arrived at Victoria Station and jumped into a Mercedes-Benz 600 Landaulet in front of scores of fans. There, he allegedly gave a Nazi salute as the limousine drove away. After a massive uproar in the press, Bowie expressed regret for the incident, blaming drugs and mental health issues.

And his choice of a car only adds to the controversy. Not only were Mercedes’ opulent limos the car of choice for Nazis, his particular car had a reportedly dark history. According to legend, Bowie’s 600 was originally owned by the dictator of Sierra Leone. Built from 1963 to 1981, Mercedes range-topping limo was the most expensive car in the world. And while it was favored by celebrities and the ultra-wealthy, it also had an unfortunate reputation as the car of choice for the world’s most brutal dictators. By just about every angle, the Victoria Station Incident was the worst look of Bowie’s image-conscious career.

Next: A designer known for his one-of-a-kind style 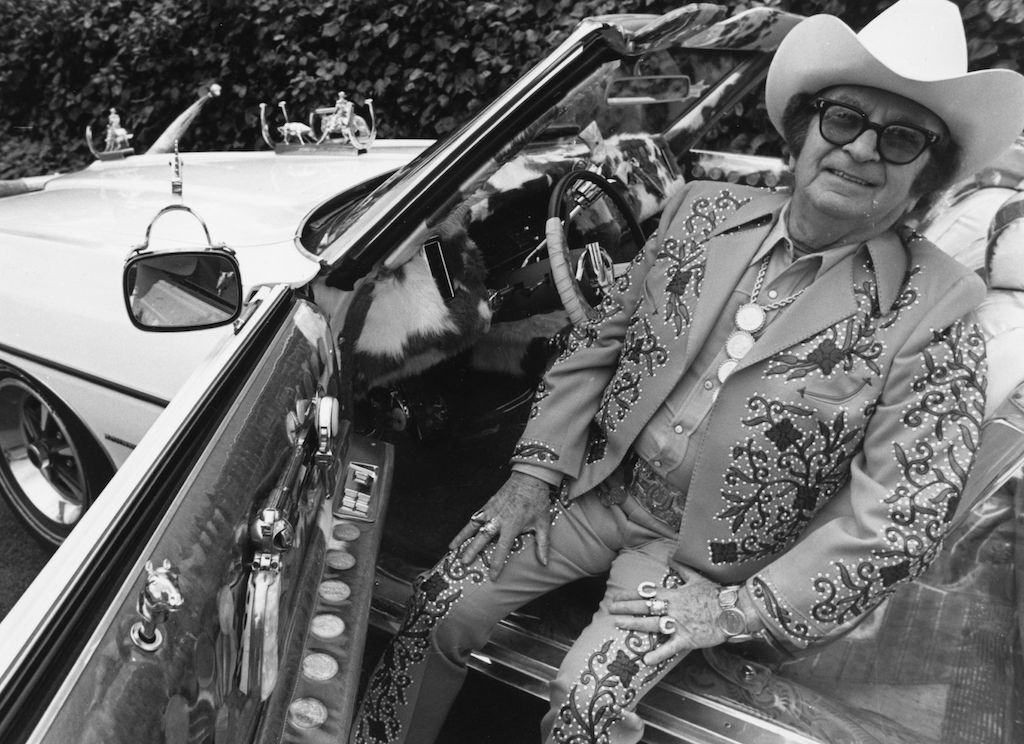 Here’s another name you might not know. But if you remember the embroidered, shiny, Western-style suits favored by John Wayne, Glen Campbell, Elton John, Gram Parsons, Cher, Elvis, and ZZ Top back in the ’70s, you’ve seen the work of Nudie Cohn. Creator of the “Nudie Suit,” Cohn sold his garish and expensive clothes (suits could cost as much as $18,000) in Hollywood for nearly 40 years. Here he is in one of his many outrageously customized Pontiacs. This one is a 1971 Bonneville.

Next: A car fit for a rock star 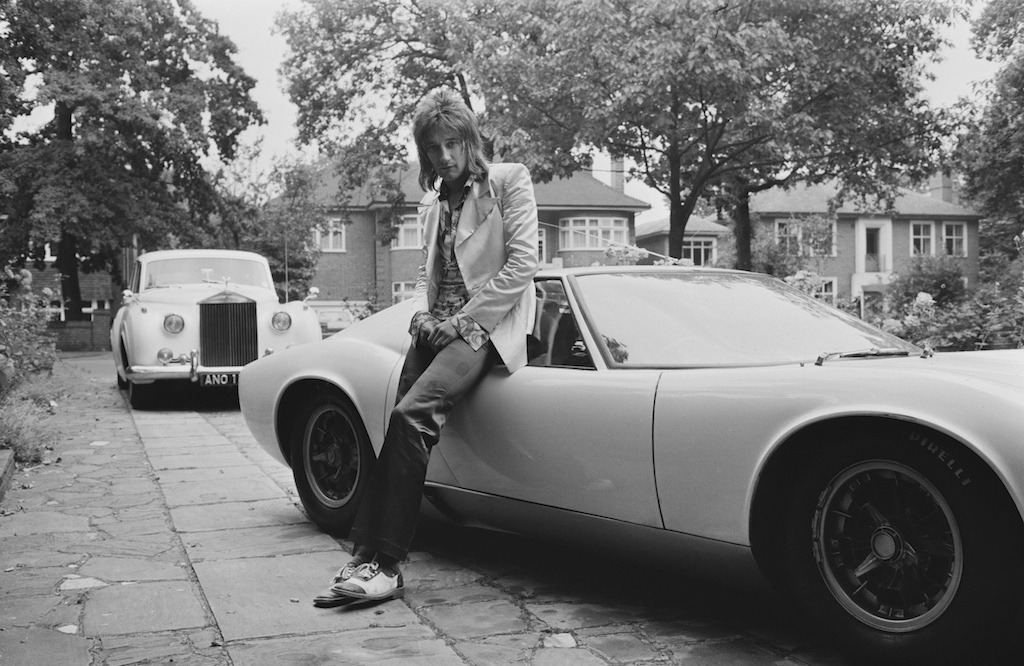 Of all the big rock stars of the ’70s, Rod Stewart had a reputation for living the good life. In 1971, Rod was the singer of  The Faces and had just released his solo album, Every Picture Tells a Story. On the strength of the single “Maggie May,” he quickly became more successful on his own than in his band. How did he celebrate? By buying a Lamborghini Miura. Considered one of the most beautiful cars ever built, the V12-powered, mid-engined Miura is also known as the first modern supercar.

Next: The next car was lost to history

In the 1970s, Pierre Cardin was one of the hottest fashion designers in the world. And in 1975, he worked with boutique Swiss automaker Sbarro to design the Stash — that’s right, there’s a ’70s car called the Stash. While it looks like a bit like a Ferrari 308 GT4, the Sbarro was its own animal. And while the automaker pulled out all the stops for its launch at the 1975 Paris Motor Show, the Stash has largely been lost to history. It’s been reported that just five cars were ever built.

Next: A hand-built car for one of the biggest stars of the decade

He may still be a megastar, but Elton John was at the height of his powers in the 1970s, and he wasn’t afraid to show it. There’s a lot going on in this photo, but aside from the star-spangled jet, Elton is flanked by a Mercedes-Benz 600 Grosser. Built from 1963 to 1981, the 600 was hand-built by Mercedes for its clients. Between its levels of quality, complex engineering, and infinite options, it was, for a time, the most expensive car in the world.

Next: The next car on the list is a work of art. 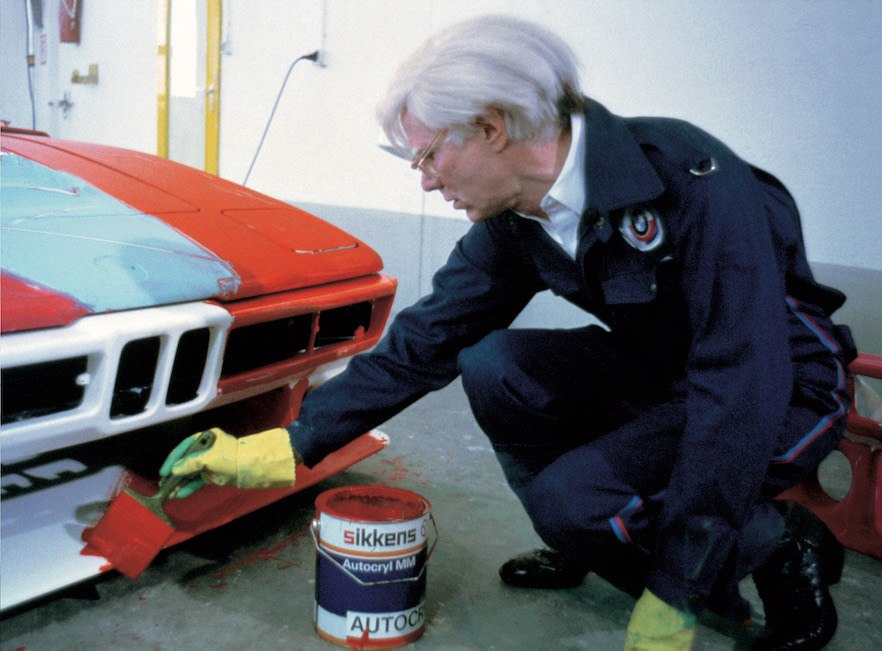 By the end of the ’70s, Andy Warhol was arguably the most famous artist in the world. With its then-new “Art Car” program, BMW reached out to Warhol to paint its latest supercar, the M1. While the car is considered priceless today (both for its automotive reputation and as Warhol artwork), neither the artist or the automaker were particularly precious about it. Warhol took just 24 minutes to paint the car. BMW then took it racing, where it competed in the 24 Hours of Le Mans, as well as other endurance events over the 1979 season.

Next: A rock star and his car collection 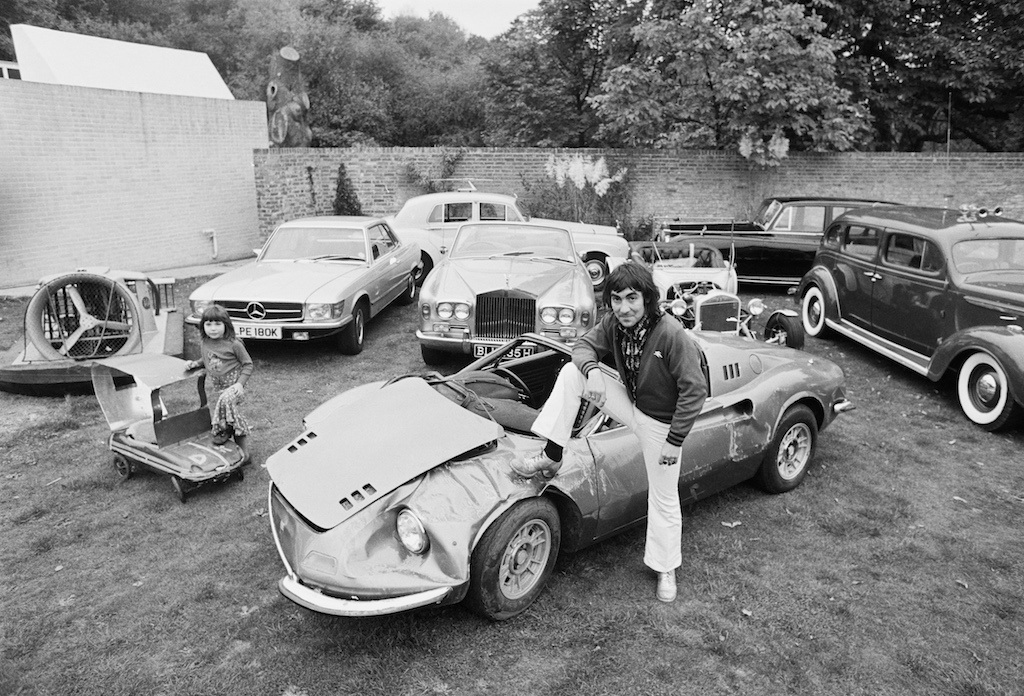 If the ’70s were the decade for sex, drugs, and rock and roll, few people practiced it as religiously as Keith Moon, the drummer for The Who. Widely credited with perfecting rock star cliches like trashing hotel rooms, driving luxury cars into swimming pools, and destroying his drums on stage every night, Moon partied harder than just about anybody. He ended up paying dearly for it too — he died at age 32 in 1977. Here’s Moon in 1972 with daughter Mandy and an array of his cars. There are three Rolls-Royces, a Mercedes-Benz 350SLC, Bucket-T Ford hot rod, a 1930s Chrysler, a hovercraft, and a Ferrari Dino.  He famously gave the keys to the Ferrari to a group of teenagers at his local pub and forgot about it — until he found the car wrecked in a ditch while stumbling home drunk.

Next: This British royal preferred to drive a sports car. 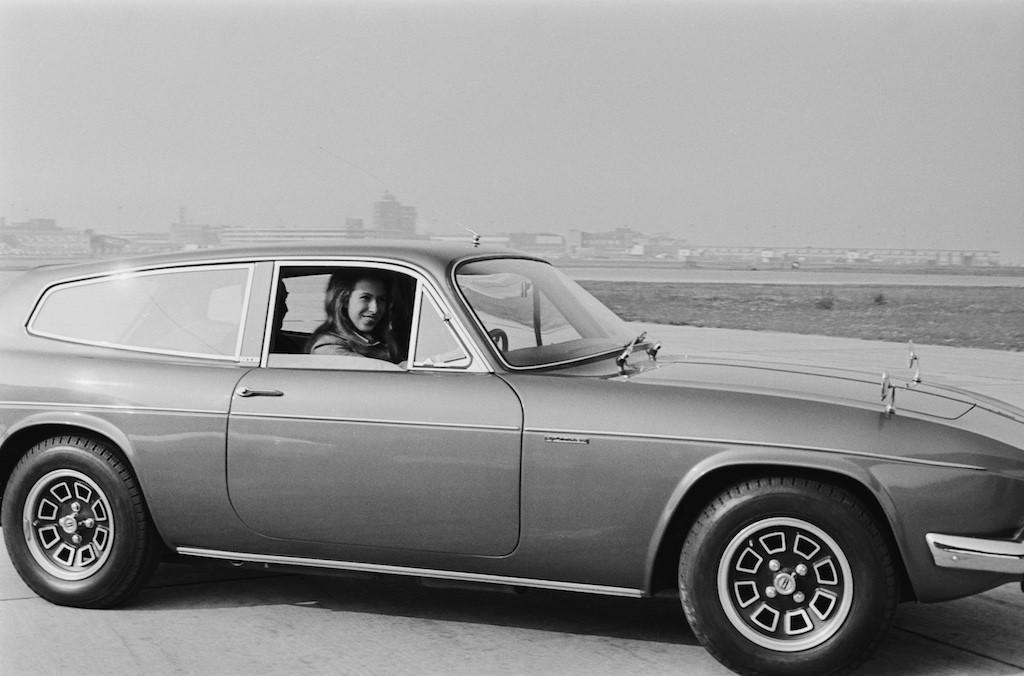 While the Queen was busy being, well, the Queen, the rest of the British Royal Family was able to enjoy themselves in the ’70s. Here’s Princess Anne, younger sister of Prince Charles, driving right up onto the tarmac at Heathrow Airport in her 1971 Reliant Scimitar GTE. A rare, obscure British sports car, the Scimitar was a fiberglass-bodied shooting brake that was built from 1964 to 1986.