With shares of Google (NASDAQ:GOOG)(NASDAQ:GOOGL) trading around $584, is GOOG an OUTPERFORM, WAIT AND SEE, or STAY AWAY? Let’s analyze the stock with the relevant sections of our CHEAT SHEET investing framework:

Google is a global technology company focused on improving the ways people engage with information. The business is based on the following areas: search, advertising, operating systems and platforms, and enterprise. The company generates revenue primarily by delivering online advertising. Google is a search giant with most of the market share largely because of its execution and delivery. An increasing number of consumers and companies worldwide are coming online, which will surely increase the amount of eyes on the company’s ads and, in turn, advertising revenue. At this rate, look for Google to remain on top of the Internet world.

A few months after Apple’s (NASDAQ:AAPL) acquisition of Beats Music, Google has announced a music service acquisition of its own. In a post on the Google Play Google+ page, Google announced its acquisition of Songza, a music streaming platform which it characterizes as a “a great service which uses contextual expert-curated playlists to give you the right music at the right time.” The acquisition gives Google a streaming service to match Apple’s iTunes Radio and Amazon’s (NASDAQ:AMZN) Prime Music. No immediate changes to Songza are planned, so the service will continue to work “like usual” for current Songza users on Android and iOS. The company does have plans to integrate Songza’s services into its two other music apps, Google Play Music and an upcoming YouTube streaming service. Google wrote: “Over the coming months, we’ll explore ways to bring what you love about Songza to Google Play Music. We’ll also look for opportunities to bring their great work to the music experience on YouTube and other Google products.”

The price for the acquisition has not been disclosed. Songza, which launched in 2010, has gathered only 5.5 million users versus Pandora’s (NYSE:P) 75 million and the 40 million each gathered by Spotify and Apple’s iTunes Radio, according to The Wall Street Journal. However, the service is best known for its ability to account for a user’s location, the time of day, or the day of the week in its curation of custom playlists. The 40-person team behind Songza will join Google, according to the Journal. Mashable reports that the company will move to Google’s New York offices this summer. Google is expected to integrate Songza into subscriptions for Google Play Music and the YouTube service, which is expected to be launched within the next few months.

Songza CEO Elias Roman also says that the technology could be used to target ads, or to provide book and movie recommendations — an area for which Roman visualizes a big future. “Historically the Internet has been about searching and browsing,” he told The Wall Street Journal. “The future isn’t about people finding things, it’s about things finding people.” Songza implements both algorithms and human curation, and keeps the two separate, according to Mashable. And while the company hasn’t yet expanded to areas other than music or the advertising that accompanies it, Google has reportedly been looking to improve the recommendations provided in the Google Play Store. Songza’s technology could do that, as well as strengthen the music and digital content services that Google views as integral to attracting users to Android. The move is widely perceived as a response to Apple’s May acquisition of Beats Electronics and the company’s Beats Music streaming service, but Billboard posits that Google didn’t acquire Songza because of the Apple-Beats deal. Billboard reports that Internet radio services are “already mainstream”; the most recognized music streaming services are Internet radio services.

Google stock has been moving higher over the last couple of months. The stock is currently trending higher and looks set to continue this path. Analyzing the price trend and its strength can be done using key simple moving averages. What are the key moving averages? The 50-day (pink), 100-day (blue), and 200-day (yellow) simple moving averages. As seen in the daily price chart below, Google is trading above its rising key averages which signal neutral to bullish price action in the near-term. 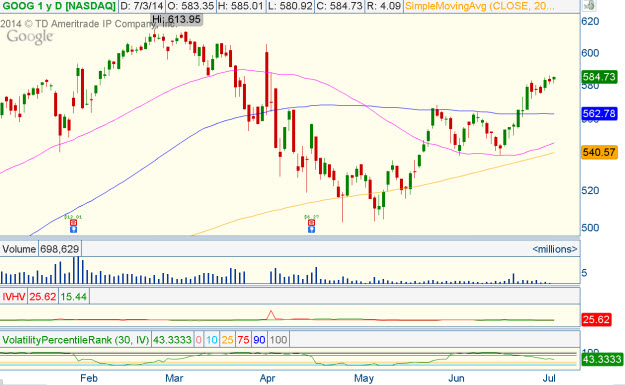 Google has seen mixed earnings and increasing revenue figures over the last four quarters. From these numbers, the markets have been pleased with Google’s recent earnings announcements.

Google has been an average performer, year-to-date.

Google is an Internet giant that provides valuable search and advertising services to a growing user base worldwide. The company has recently announced its acquisition of Songza. The stock has been moving higher over the last couple of months and looks set to continue this path. Over the last four quarters, earnings have been mixed while revenues have been increasing, which has left investors pleased. Relative to its strong peers and sector, Google has been an average year-to-date performer. WAIT AND SEE what Google does next.