Will New Tariffs on Chinese Solar Products Give America an Edge?

The good news? Solar energy is seeing massive growth in the United States.

The bad news? It still has an incredibly long way to go, but the future is bright.

In an effort to help the blossoming solar industry domestically, the United States International Trade Commission decided to slap some heavy tariffs on solar panels being imported from China and Taiwan. Originally, tariffs had been aimed at Chinese products, but was it was found that Taiwan was being used as a work-around of sorts for China to dodge the original tariffs, hence the new effort to place fees on products from Taiwan as well.

As Nasdaq.com reports, the fees sound fairly hefty — 165 percent on Chinese products and 76 percent for Taiwanese products. Given the relative advantages the Asian manufacturers have over American, namely cheap labor and heavy government subsidization, action needed to be taken to help foster growth in domestic production. There is a bit of leeway for Chinese manufacturers, however, as the tariffs do not actually effect every single company. The USITC works with each company on an individual basis, and takes different things into account when determining the actual tax level.

Factors that can play a part in that determination include the origin of raw materials, where labor is outsourced to, and what the end product hitting the market actually is.

There is a small but growing contingency of American solar panel manufacturers, including Solar City (NASDAQ:SCTY) and First Solar (NASDAQ:FSLR), all of which are set to benefit from the USITC’s decision. New areas around the country are growing and becoming open to solar power as a result of improved technology and tax incentives, making the market ripe for investment. For example, places like the pacific northwest, which suffers from a reputation of constant cloud cover and rainfall, are attracting entrepreneurs and customers alike.

Naturally, the tariffs are designed to help spur on customers to make purchases from American manufacturers. The question is whether or not it will work. 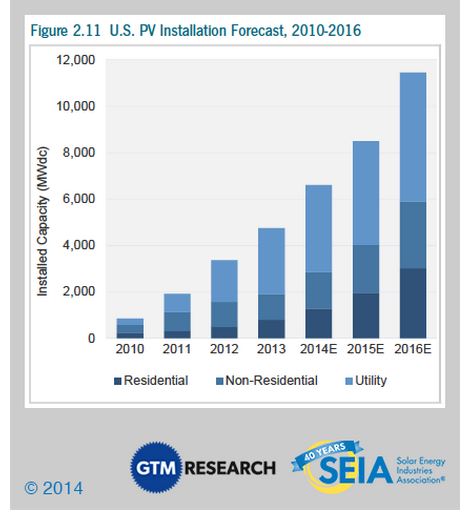 The real question doesn’t seem to be if the measures being taken to undercut Asian solar products will lead to an edge for American companies, but rather, when? The solar industry is seeing huge growth, and as can be seen in the chart above from the Solar Energy Industries Association, the next few years are expected to see a huge jump in installed solar capacity. That means a ton of business for solar installers and manufacturers of panels and components.

All of that increased capacity is coming at the beck and call of residential and commercial adopters, who have helped make solar energy one of the fastest growing energy segments in the country. By the SEIA’s estimates, total capacity increased by 41 percent last year, and was the second-largest source of new electricity production.

According to Sayle Kann, senior vice president at GTM Research, these numbers are only the tip of the proverbial iceberg.

“2013 offered the U.S. solar market the first real glimpse of its path toward mainstream status. The combination of rapid customer adoption, grassroots support for solar, improved financing terms, and public market successes displayed clear gains for solar in the eyes of both the general population and the investment community,” she said.

While the future does look bright for the U.S. solar industry, it has an incredibly long way to go before it can supply adequate amounts of power to the country’s population, and become a vital part of a mixed bag of energy sources that could ultimately replace fossil fuels. Germany, considered the world’s leader in the solar revolution, now is able to produce half of its overall energy needs from the sun.

The United States is still stuck below one percent, to put things in perspective.

Yes, the U.S. has a steep hill to climb, but the prospects for solar energy are better than ever. With tariffs helping giving American manufacturers an advantage, the opportunity for job growth and increased investment has never been better.