Will Private Money Drag Obamacare Across the Finish Line?

A departmental budgeting crisis is forcing the government to seek out aid from healthcare industry executives to ensure a successful rollout of Obamacare. Health and Human Services Secretary Kathleen Sebelius has been working the phone lines in a bid to attract “large financial donations ” to help the department ensure a successful launch, according to a report in The Washington Post. Sebelius has been reaching out to industry executives, community organizations, and religious groups to pitch in to increase insurance enrollments and also raise awareness about the law, the publication said.

The move comes after the administration’s bid to channel additional funds to set up the Affordable Care Act didn’t receive support from Congress, leaving the department to implement the legislature within its existing budgetary allowance.

Sebelius’s efforts were confirmed by department spokesman Jason Young in an interview with Bloomberg. He told the publication that the secretary had been telephoning executives since March to discuss the act and emphasize the importance of promoting it. The attempts remain active, although he didn’t mention which executives or companies Sebelius has been in touch with on this issue.

Not surprisingly, the news has met with backlash from across the aisle, with Republican Senator Orrin G. Hatch saying that he will be pursuing more information to determine if “there are conflicts of interest and if it violated federal law.”

Next week, in fact, House Majority Leader Eric Cantor is seeking to block Obamacare again. The Republican representative from Virginia had tweeted that he was scheduling a vote for the full repeal of the act.

The $1 billion set aside for the implementation of Obamacare falls short of funding requirements specified by the Congressional Budget Office. In February, the CBO reiterated its earlier estimate that the U.S. Department of Health and Human Services and other federal agencies would require at least $5 billion to implement the act.

The need to raise awareness and ensure a high number of healthcare insurance enrollments is pivotal for the success of the government’s flagship program. Without a vast number of the uninsured signing up, healthcare companies could raise average insurance premiums much more than expected.

A recent survey by the Kaiser Family Foundation found that about 42 percent people were unaware that Obamacare had been approved both through legislation and the legal route. A more worrying statistic in the poll was that roughly half the people do not have enough information about Obamacare to understand how it will impact their families. A majority of those in that category were either uninsured or from low-income households — two key demographics the government is targeting through the act. 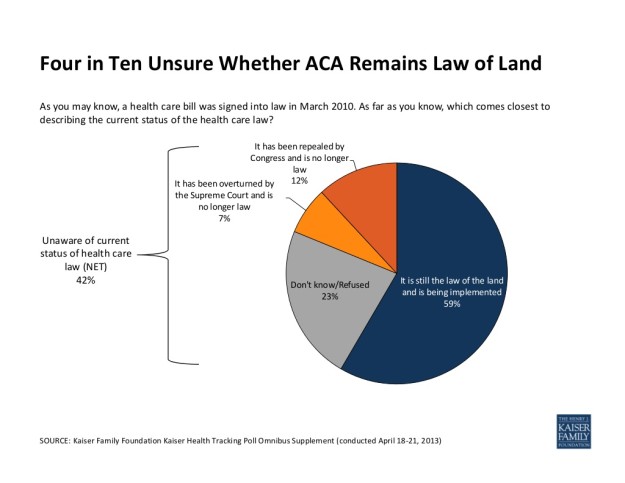 Obamacare was signed into law back in 2010, but has been met with opposition at every stage of the process. The act, which requires insurance companies to accept all applicants, even those with pre-existing conditions, recently received the Supreme Court’s approval.

The term Obamacare has been more popularly used to reference the act, and has found tacit approval from the president himself. During his debates with Republican challenger Mitt Romney in the run-up to the 2012 presidential elections, Obama said he doesn’t mind the term being attached to his name.

The rollout of the law and its level of success will likely go down in history as one of the most important benchmarks to determine the legacy of the 44th president of the United States.