With shares of Wal-Mart (NYSE:WMT) trading around $75, is WMT an OUTPERFORM, WAIT AND SEE, or STAY AWAY? Let’s analyze the stock with the relevant sections of our CHEAT SHEET investing framework:

In the first move of its kind, the city of Portland, Oregon, announced that a number of holdings the company held in retail giant Wal-Mart had expired, and that the city would not be making any further investments in the company. The decision by Portland city officials is unique in that it is the first time a major American city has turned on Wal-Mart, raising eyebrows around the country and wondering what other companies may get the cold shoulder from Stumptown. The divestment itself stems from the city’s 2013 adoption of a socially responsible investment protocol, the criteria of which Wal-Mart has apparently not met. Portland looks to be completely free of Wal-Mart investments by 2016, which all together adds up to $36 million, or 2.9 percent of the city’s portfolio. In response to the divestment, Portland Commissioner Steve Novick says Portland is blazing a new path in the way cities look at their investments.

“From what I can tell, no other U.S. city has looked at socially responsible investing in quite the same way as Portland,” he said. “I’m hopeful other cities and states take note and adopt similar investment principles to hold companies accountable and align our investment policies with our values. Unions and students from local universities were a driving force in implementing the new socially responsible investment protocols, which include the creation of a committee to oversee any future investments to address issues like health concerns and corruption. The protocols not only allow Wal-Mart’s current investments to expire, but also stops the city from pointing its investing activities back in Wal-Mart’s direction in the future, according to Truth-Out.

Wal-Mart stock has seen its fair share of volatility over the last couple of years. The stock is currently pulling back and may need time to stabilize before heading higher. Analyzing the price trend and its strength can be done using key simple moving averages. What are the key moving averages? The 50-day (pink), 100-day (blue), and 200-day (yellow) simple moving averages. As seen in the daily price chart below, Wal-Mart is trading below its rising key averages which signal neutral to bearish price action in the near-term. 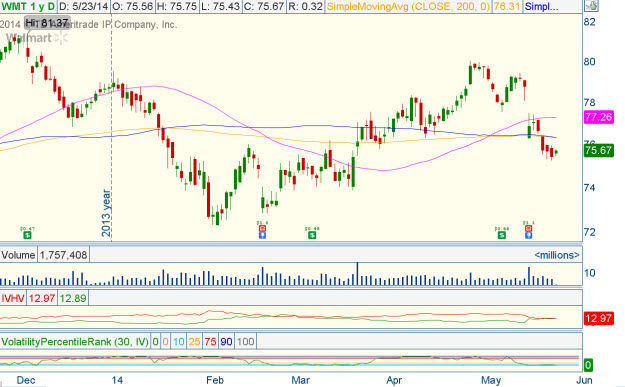 Wal-Mart has seen mixed earnings and increasing revenue figures over the last four quarters. From these numbers, the markets have had mixed feelings about Wal-Mart’s recent earnings announcements.

Wal-Mart is a retail company that provides a variety of products and services to consumers and companies worldwide. The city of Portland, Oregon, announced that a number of holdings the company held in retail giant Wal-Mart had expired, and that the city would not be making any further investments in the company. The stock has seen its fair share of volatility and is currently pulling back. Over the last four quarters, earnings have been mixed while revenues have been increasing, which has produced mixed feelings among investors. Relative to its peers and sector, Wal-Mart has been a relative year-to-date performance leader. WAIT AND SEE what Wal-Mart does this quarter.