Will This Be the Newest Member of the Federal Reserve Board? 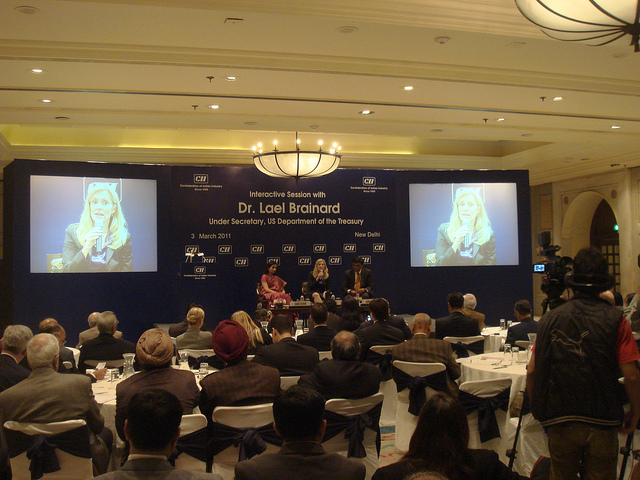 Janet Yellen may soon have someone to keep her company while awaiting Senate confirmation. Lael Brainard, who currently serves as the U.S. Department of the Treasury’s Under Secretary for International Affairs, is likely to be nominated to the Federal Reserve Board, a person familiar with the matter told Bloomberg. An unnamed Treasury aide added to this speculation, saying that Brainard will be stepping down from her position on November 8.

The Federal Reserve Board is made up of seven members. Each member is appointed by the President and approved by the Senate. Vacancies normally occur once every two years, and full-terms last fourteen years. This year, the President has several seats on the Board to fill. In addition to replacing Chair Ben Bernanke, there is the vacancy caused by Elizabeth Duke’s August resignation, and the nomination of board member Sarah Bloom Raskin to be Deputy Secretary at the Department of the Treasury.

As Under Secretary for International Affairs, Brainard is responsible for improving U.S. investment opportunities and leadership abroad, addressing transnational issues, such as climate change. Brainard obtained her masters and doctorate in economics from Harvard University. She served in the Clinton White House as Deputy National Economic Adviser and Deputy Assistant to the President on International Economics.

Her role as undersecretary required a Senate confirmation as well. She was nominated in March 2009. In September 2009, the Wall Street Journal was able to report her confirmation was still pending due to inquiries into a home-office tax deduction she had filed. Brainard was eventually confirmed 78-19 in April 2010.

Republican Senator from Kentucky Jim Bunning, opposed the nomination. Bunning told the New York Times, “I don’t think it’s unreasonable for the American people to expect nominees to an important post in the Treasury Department to have a clean record in the payment of their taxes.”