11 Everyday Words You Should Never Say in a Job Interview

Avoid these bad interview words to save your credibility. | iStock.com

Job interviews are terrifying. Actually, if we’re being honest, the whole process of job hunting is terrifying. You’re up against an average of 250 applicants for every open corporate position, so you need to put your best foot forward at all times. More than likely, your resume boasted summary sections about your “effective communication” and “professional demeanor.” Interview jitters can certainly take you off your game, but that’s no excuse for falling back into a language trap.

Your verbal communication is often the biggest, and sometimes only, indicator of you as a person. How you talk to recruiters during an interview is like gazing into a crystal ball to see how you’ll communicate with potential clients, team members, and the entire company in the future. How you field questions and speak to others influences someone’s first impression. It’s an essential business skill, per the American Psychological Association.

That’s why we’re calling out 11 words and phrases that will instantly kill your credibility and risk sending your hopes of a better career down the drain. How many of these phrases have you used just today? Let’s find out.

You’re probably using this word to convey things, such as, “I always give 110% at work,” or “I always arrive on time.” Do you, though? Are you one of those super-human beasts who wakes up and beats the rush-hour traffic every morning?

Making generalized statements like this sends a red flag to interviewers who know you can’t always be on top of your game. Now you’ve worried them by showing you might not be telling the whole truth. Certified career coach Chrissy Scivicque tells U.S. News to quantify your statements as much as possible to avoid this trap. For instance, “I surpassed all my quarterly goals last year,” is far more effective than, “I always hit my sales numbers.”

General statements will earn you an eye roll from hiring managers. | Paramount Pictures

Similar to saying “always,” “never” is an extreme word that often accompanies empty statements. Scivicque warns this is yet another generalizing word that will make every interviewer cringe. Never is so definite and final that it will probably illicit an eye roll and trigger doubt in interviewers’ minds if you use it to describe your strengths. Convey value instead. Rather than saying, “I never miss a deadline,” try talking about how you proactively avoid delays by keeping an open line of communication through the entire project cycle.

Filler words like these make you sound dumb and kill your credibility in seconds. Who can concentrate on your accomplishments if all they’re hearing is, “Then, um … I, like, saved the company, uh, I’d say $10,000 in return fees.”

Prepare what you’re going to say ahead of time, and speak in shorter sentences. It will help prevent using these words more than necessary. Steven D. Cohen of the Harvard Extension School says we’ve been conditioned to speak when spoken to. Thus, we feel the need to respond right away. He suggests we take a moment to pause and collect our thoughts before attempting an answer.

Sophomores who were just asked to the senior prom should be the only people using the phrase, “For sure!” So unless you’re a love-struck teenager, eliminate this from your vocabulary now. A simple “yes,” or even “great,” is all you need to convey enthusiasm. Shouting “For sure!” after the hiring manager asks whether you’re available for a Friday interview is already starting things off on a bad note. This phrase might convey an eagerness that could be off-putting to a potential employer.

Too much slang can confuse your audience. | iStock.com/nandyphotos

While we’re at it, let’s chat about other words of affirmation we often overuse. Maybe you’re in a rush, or they’re running you through a list of quick informational confirmations during a phone interview. This leads to a quick round-off of questions and answers, but it doesn’t take precedent over formality. When asked to confirm your last place of employment was with a finance firm in D.C., do not replace a simple “yes” with a casual “yup.” Aim to stay professional and well-spoken.

Save this lingo for the beach. These words are perfectly acceptable to use once you retire and pick up surfing, but during your interview? No way. It’s easy to revert to old habits in uncomfortable situations, but it’s best to avoid these all together. Don’t be that guy who blurts out, “Thanks, dude,” at the end of the interview. 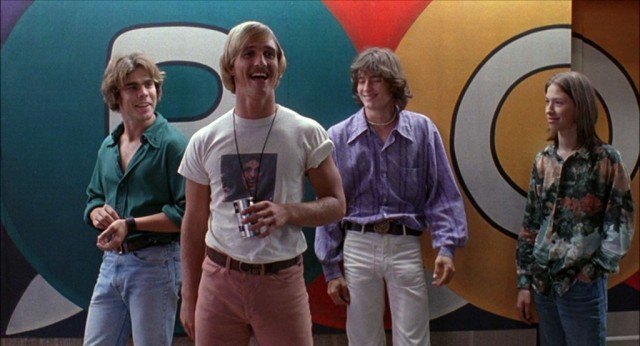 Try not to act dazed and confused during your interview. | Alphaville

Almost anything is better than claiming you “don’t know” something. Now, we’re not suggesting you lie. In fact, you should never embellish your abilities during the job search. But you should definitely try to demonstrate intelligence. When interviewers go through a list of hypothetical scenarios, they’re not simply looking for a right answer. They’re gauging your ability to reason and think critically about a potential solution to a problem. So instead of giving up on an answer, talk through how you approached a problem or handled something similar in the past instead.

If you feel a curse word coming on, bite your tongue. | Warner Bros. via YouTube

For those of you looking to bomb an interview within seconds, fling a curse word into the air and see how it flies. Sarcasm alert: CEOs love it when candidates use an enthusiastic F-bomb to describe their last boss. All jokes aside, biting your tongue can be hard for self-proclaimed potty-mouths, especially during stressful processes, such as interviews. No matter how casual your potential new workplace seems to be or how many curse words the hiring team drops during your conversation, keep your language professional.

9. If that makes sense

On the surface, it might seem like a kind gesture to ask whether everyone understands what you just said. However, Larry Kim, founder of WordStream, says it best in an article from Inc.com: “Your job is to ensure that something makes sense. If the words you’re using aren’t good enough to achieve this goal, find better words.”

A stronger solution would be to wrap up your explanation by asking, “Do you have any questions?” If something wasn’t clear, they’ll speak up.

Don’t fall victim to word vomit during an interview. | NBC

You just delivered this unbelievable response to a hypothetical question. Score! But then, in an attempt to avoid word vomit and eliminate awkward silences, you capped it off with a “so yeah.”

Instead of deflating the sheer awesome nature of your response with vague slang, wrap it up by asking a follow-up question or summarizing your point to bring it home. Responses, such as, “So to answer your original question, yes, I feel very confident in my abilities to lead a team of four,” will show you’ve been focused on the question all along.

And speaking of awesome …

Can’t we find a synonym for awesome? | Paul A. Hebert/Getty Images

Of the thousands of words in the English language, why can’t we find a better word than “awesome” to describe our appreciation for something? The Oxford English Dictionary contains entries for 171,476 words we currently use, so there has to a better adjective waiting for its time to shine. A quick browse through the thesaurus gives us words, including marvelous, fabulous, outstanding, and impressive. Although the use of these substitutes might make us sound like English royalty, who’s to say it won’t add a bit of flair to our next email communication?