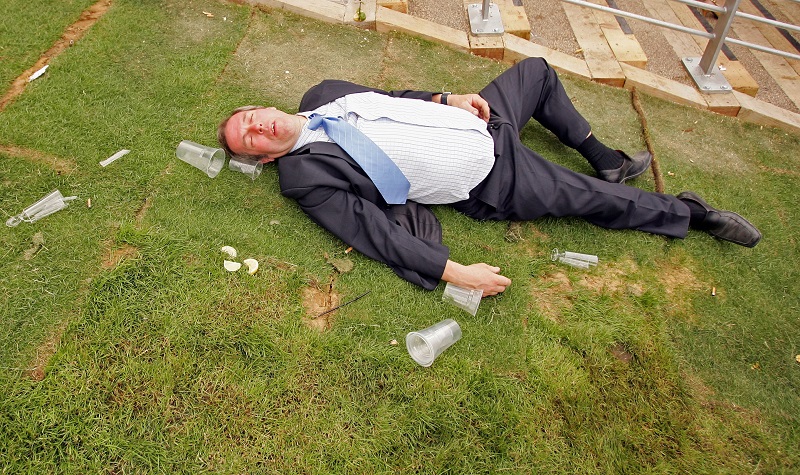 We’re all familiar with the phrase (or Wiz Khalifa song), “work hard, play hard,” or some variation of it. Essentially, it means that an individual takes things seriously, and goes all-out in any given situation — be it in a professional capacity, or just hanging out on a fishing trip with their friends. Well, researchers looking into the relationship between working hours and substance use have found that there is some truth to the notion, particularly when you add alcohol to the equation.

To quickly summarize the findings of the analysis, published in the British Medical Journal in January of this year, the more hours you work in a given week, the more likely it is that you’ll drink, and potentially dangerous, amounts of alcohol.

“Our findings suggest that alcohol consumption is more likely to rise to risky levels among employees who work more than 48 hours a week compared with those with standard working hours,” the study concludes. “Possible explanations for the association between long working hours and risky alcohol use might involve the work environment as well as individual characteristics. One view is that alcohol use alleviates stress that is caused by work pressure and working conditions.”

Of course, the pressure in different positions and working conditions can vary wildly from job to job, and even from country to country. For example, the researchers did find that workers in Europe were even more likely to go overboard with their alcohol consumption than those in the U.S., yet there’s reason to believe that European workers may face less pressure than those in the U.S. — with more social safety nets, and things like universal health and childcare helping alleviate some financial stresses.

In fact, if workplace stresses are tied to increased rates of risky alcohol consumption, Americans might be in trouble. Some studies have shown that as much as 80% of the American workforce is “stressed out” because of their jobs.

In addition to those stresses, other factors — like sleep, or lack thereof — can play a part in decisions regarding alcohol consumption. Depression is another key factor mentioned by the researchers, as well as personality type.

“Individuals with “type A” behaviour pattern, which is characterised by aggressiveness and irritability and a chronic struggle to achieve more and more in less and less time, can end up in highly competitive jobs and work communities characterised by a “work hard play hard” culture with positive attitudes towards heavy alcohol use,” the study says. “Personality traits of impulsivity and novelty seeking have also been found to be associated with risky alcohol use.”

While no one really thinks it’s irresponsible for individuals to head to the local bar, or have a glass of wine or two at home after leaving work, it’s the effects that those decisions have that are leaving researchers and employers concerned. We know that drinking, in general, is bad for you. It can lead to dependency issues and long-term health problems, as well as affect productivity on the job the next day.

For that reason, employers and businesses may have a built-in incentive to keep workplace stresses to a minimum, as well as keep workers as close to a 40-hour week as possible.

Ultimately, decisions and responsibility regarding what and when alcohol is consumed lies with the individual. For those fully engrossed in office culture, and with the go-go-go attitude present in many American workplaces, it’s easy to see why some people can get carried away. Now, we have some evidence (if not a lot, since the study in question backs up 36 previously released papers) of the factors that play into those decisions — many of which are economical and work-related.

Still, a relatively small number of individuals involved with the study were found to be ‘risky’ drinkers, meaning that most Americans may have a good handle on how many drinks they can deal with, especially given how stressed and overworked U.S. workers tend to be.

The lesson here is that there is definitely some truth to the idea of ‘work hard, play hard’. The key is to not go totally overboard with it — lest the play start to have a negative effect on the work.