The 15 Worst Celebrity Tippers of All Time

Success and generosity don’t always go hand in hand. Fame sometimes goes to our heads, making us feel invincible or above typical social norms and bylaws. And while the famed elite are busy living it up in mansions and pricey vacation homes, the rest of America trudges onward. Waiters and waitresses deal with the meanest of mean and have endured years of bad celebrity tippers. And they’re getting tired of landing on the wrong side of a celebrity transaction.

Tiger Woods is one of the worst celebrity tippers of all time. | Ross Kinnaird/Getty Images

For someone who is — or was — a master of the greens, Tiger Woods is notoriously bad with his financial green when it comes to tipping servers. From taking back a $5 tip while playing a $10,000 blackjack hand to leaving chump change as a thank you for expensive meals, the golfer has cemented himself as one of the worst celebrity tippers.

Next: An Entourage star

Jeremy Piven has been banned from a Colorado sushi restaurant. | Ben Gabbe/Getty Images

There’s no more convincing evidence of terrible tipping tactics than being asked never to return to a restaurant. After eating at a sushi restaurant in Aspen, Colorado, actor Jeremy Piven set out to thank the establishment for its service on such a busy night. The reward? A DVD copy of Entourage Season 1, in which Piven starred — no actual money in sight.

Next: A celebrity chef

This celebrity chef is famous for coining words, such as “delish” and “yummers,” but apparently she still fails to tip with actual coin for restaurant service. Rachael Ray once dominated the Food Network with budget-friendly shows, such as $40 a Day. According to plenty of waiters and waitresses, her definition of dining on a budget means leaving less than a 10% tip for meals. She’s also frequently listed as one of the meanest people in Hollywood.

Next: A football legend 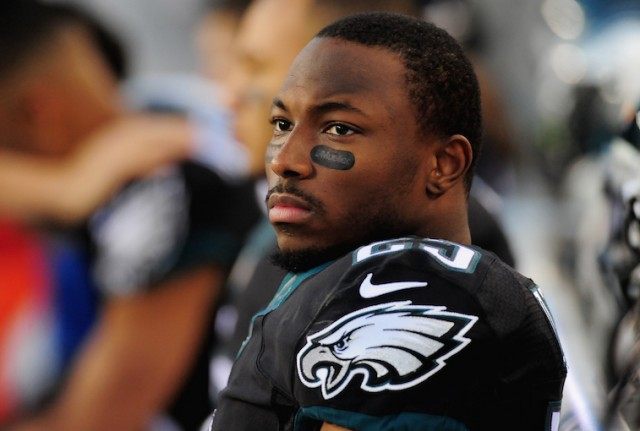 Some celebrities keep their tipping practices close to the chest. Others broadcast it via very public social media posts. Running back LeSean McCoy was forced to defend his bad tipping faux pas after reportedly feeling disappointed by the service at a Philadelphia burger joint. The restaurant manager posted a picture to the Facebook page showing a 20-cent tip on a $61 bill.

When asked about it, LeSean stood his ground claiming, “A 20-cent tip is kind of a statement. You can’t disrespect somebody and expect them to tip you. I don’t care who the person is. That’s why I left my card, so they could see my name.”

Next: A “Spider-Man” actress

Actress Kirsten Dunst has been the subject of multiple terrible tipping accusations. Fox News once reported she failed to leave “even the smallest gratuity” on a $233 bill, according to the restaurant’s former assistant manager. And she’s also been known to rudely forgo tipping altogether on generously comped meals in local Hollywood joints, according to Business Insider.

Next: The NBA’s GOAT

Michael Jordan is perhaps the greatest basketball player of all time. But when it comes to social rules, it seems he’s got a lot more to learn. Even long-time friend Charles Barkley had no problem calling out his cheapness and disappointing tipping habits during an interview with Sports Illustrated. Barkley said Jordan is “as cheap as they come.”

Next: Tipping with the Kardashians

Kendall Jenner has a bad track record for tipping at restaurants. | E!

Even young celebrities can be bad tippers. In ultimate diva fashion, Kendell Jenner got angry when a restaurant wouldn’t serve her alcohol as an underage patron. She left without paying. When chased, Jenner threw $20 bills at the staff without counting whether it would even cover the bill, let alone a tip. Later, in an attempt to rebuild her reputation, she left a $160 gratuity for a $554 total at a different restaurant.

Next: An R&B singer and a coach on “The Voice”

Unless his early album Confessions also admitted to poor dining habits, Usher failed to truly profess all. According to Business Insider, Usher thinks so highly of himself he leaves autographs as tips. Unless it comes with an impromptu performance of “Yeah!” most would deem his signature worthless. Other wait staff would probably prefer cold hard cash like proper behavior dictates.

Next: A singing sensation

When it comes to bad celebrity tippers, Madonna is one of the worst offenders. She’s been known to go rogue and leave bad tips all over the world. She once left $18 for a $400 bill at a London restaurant. Then, in New York City, she reportedly left no tip at all. Not vogue, Madonna, so not vogue.

Next: A tennis superstar

Serena Williams has a history of “forgetting” to tip. | Philippe Lopez/AFP/Getty Images

Tennis pro Serena Williams didn’t always enjoy the lifestyles of the rich and famous. But now that she’s made millions on the court, it seems she keeps her cash close. The athlete once ate at a well-known Steak House in Harlem and received a comped meal. However, her seven-person entourage proceeded to rack up a $400 bill and leave zero tip for the restaurant staff. Then, she left without saying thank you. Double fault, Serena.

Next: One of the richest people in the world

It might surprise you even one of the richest people in the world would exhibit cheapskate tendencies when it comes to tipping. But it happens. While on his honeymoon in Europe, the Facebook mogul Mark Zuckerberg chose not to leave what would have been just an $8 tip on a $40 restaurant bill. His need to cut back on spending confuses most of us, as he’s a billionaire.

Next: A pop star turned shoplifter

Singer Britney Spears is no stranger to bad publicity. Now, she can add bad celebrity tipper to her already colorful resume. It’s been reported the pop singer once amassed a $250 food bill at LA’s One Sunset and went stingy on the tip — in the form of zero dollars. The same report also claimed she threw change at a valet in anger. But that’s not the only way Spears stiffs workers. She has even been accused of shoplifting.

Lea Michele is one of the worst celebrity tippers. | Kevin Winter/Getty Images

Not only did the Glee star play a brat on TV, she’s apparently one in real life, too. Reports accuse Lea Michele of being rude and demanding at restaurants, often sending back plates and making insane requests for service. Unfortunately, waiters are not generously compensated for their efforts. She reportedly only leaves a 10% tip for her meals.

Next: A popular comedian

Comedian Ron White’s tipping habits are no joke. According to a celebrity Reddit feed, he could use a lesson in manners. The thread claims, “Ron White had a show across the street from the bar I worked at in downtown Denver. He came in with his posse and some girls and asked if he could sit on the patio. I said yes, and we proceeded to serve him for the next hour and a half … until last call. They were the only ones there and they racked up a hefty bill. I brought them the bill, which was around $1,200, and they paid and left. When I picked it [up] he had written ‘0’ in the tip line. … He didn’t forget or mess it up, he WROTE zero.”

Next: An award-winning actress

Stars say the darndest things, don’t they? Actress and beauty guru Gwyneth Paltrow blames her history of bad tipping on the fact that she’s “bad at math.” She once told interviewers she has been passed up for job interviews and fails to help with her son’s math homework because of her lack of education. If only there were a common handheld device with a built-in calculator that would easily generate 20% of a bill.