Yellen Has Labor Market Blues, But Full Employment Is as Close as 2016 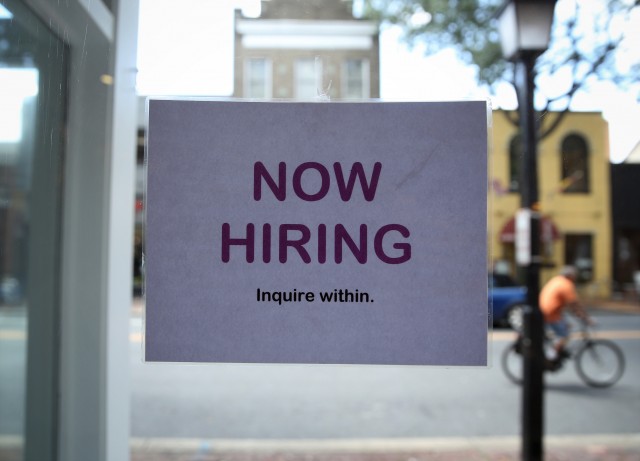 What Does the Second-Quarter’s 4 Percent GDP Growth Mean for Jobs?

In the second-quarter, the United States economy grew at an annual pace of 4 percent — a welcomed improvement from the 2.1 percent contraction recorded in the first three months of the year. But while the headline number is strong, the source of that growth is not sustainable; consumer spending — which accounts for approximately 70 percent of GDP — has not gained significant momentum this year, leaving the great majority of recent GDP oscillations the result of changes in business inventories. Inventories accounted for 1.66 of the 4 percentage points of the second-quarter’s growth after subtracting 1.16 percentage points from growth in the previous period. The first-quarter’s negative growth in business inventories was the unfortunate — but expected — side effect of the big buildup in private inventories, which boosted economic growth at the end of 2013.

With consumer spending too low to bring down those inventories substantially, businesses were left with a hangover of unsold inventory that weighed on first-quarter economic output. That cycle is largely to blame for the recent volatility in GDP, meaning that excluding inventories, the economy was not as weak as it seemed in the first-quarter nor was it as strong in the last quarter as the headline number indicated. 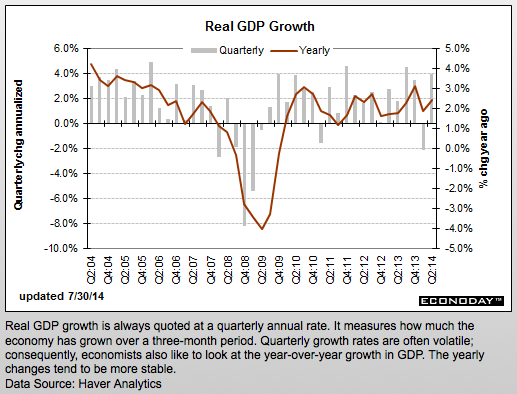 Without inventories, GDP in the first half of 2014 has mirrored levels of economic output that have characterized much of the economic recovery, meaning growth has been average at best. But by comparison, while GDP numbers say U.S. economic growth is below average, recent monthly job reports indicate that the economy is returning to strength. After the freezing temperatures of December and January kept job created muted, employment growth has gained momentum.

The connection between job growth and economic output seems relatively simply. When more people are employed, consumers have more cash at their disposal, meaning more money is being spent and businesses hire more employees to keep up with the greater demand. However, when and how GDP and job growth are measured complicates their relationship. Indeed, relatively solid job growth toward the end of the first-quarter prompted Department of Commerce economists to upwardly revise growth from a 2.9 percent contraction to a 2.1 percent contraction. But it is important to remember that the headline GDP number is not a leading indicator, rather it reflects growth through a rear-view mirror. This means a high growth rate can be the result of one-time factors, while low growth could hide underlying strength.

Still, the disconnect between GDP and the nation’s employment situation is narrowing.

Where Is Emerging Unemployment Headed?

Jobless claims — which serves as a proxy for layoffs — fit within the strong recovery narrative crafted by job creation in the past several months. In June alone, the headline unemployment level dropped two percentage points to 6.1 percent, a nearly-six year low, thanks in part to the 288,000 jobs created by U.S. employers that month. With that monthly gain, employers have added a monthly average of almost 231,000 jobs so far this year, and if that pace can be sustained, 2014 will experience the highest level of job creation since 1999. Greater job creation means improvements in emerging unemployment. 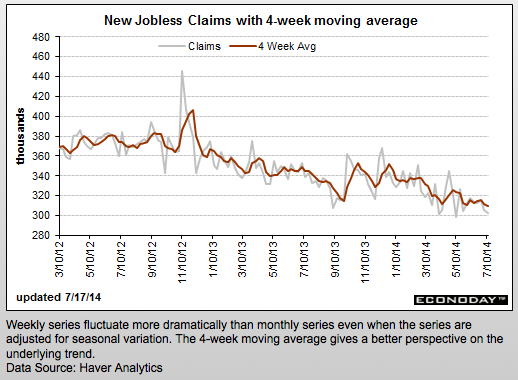 In the week ended July 26, 302,000 Americans filed initial claims for unemployment benefits — an increase of 23,000 from the previous week’s downwardly revised 279,000 claims, which were the fewest filed since May 2000. By comparison, 333,000 Americans filed jobless claims at this time last year. Before the Great Recession, weekly applications for unemployment benefits averaged approximately 320,000 due to the normal churn of the labor market, and even though jobless claims have failed to stabilize below 300,000, applications have been trending lower so far in 2014. Declining jobless claims highlight the fact that emerging unemployment is returning to acceptable levels. Or, in other words, fewer Americans are being laid off, even if long-term unemployment remains elevated and the labor force participation rate stands near record lows.

Despite last week’s uptick, the claims numbers were slightly better than the 305,000 expected by economists. Generally, during the month of July, automobile factories shut down to retool for new makes and models. However, this year, automobile production is in overdrive, and Moody’s Analytics economist Ryan Sweet cautioned in an interview with Bloomberg that the “last couple weeks’ data has been too good to be true.” Still, 4Cast Inc. senior economist David Sloan contends that “employment growth remains healthy,” with this week’s reading “consistent with a strong labor market.”

In support of that assertion, the four-week moving average dropped. Jobless claims provide the first look at the employment situation for any given month, but since the weekly figures can be volatile, economists use the four-week moving average to understand wider trends in employment, which are far more telling of labor market health than weekly readings. Last week, that key measure declined by 3,500 to 297,000 — the lowest level recorded since April 15, 2006.

But the number of workers continuing to draw unemployment benefits — a measure reported with a one-week lag — rose by 31,009 to 2.54 million in the week ended July 19.

What Does the Fed Think?

Federal Reserve policy makers announced Wednesday their decision to further taper the central bank’s monthly asset purchases as the labor market continues to stabilize, even though “a range of labor-market indicators suggest that there remains significant underutilization of labor resources,” as the Federal Open Market Committee noted in a statement, meaning there is still much slack in the market. Chair Janet Yellen told Congress earlier this month that despite the positive turn the economy has taken, she remains concerned about that “slack,” which manifests itself in low labor force participation and sluggish wage growth. 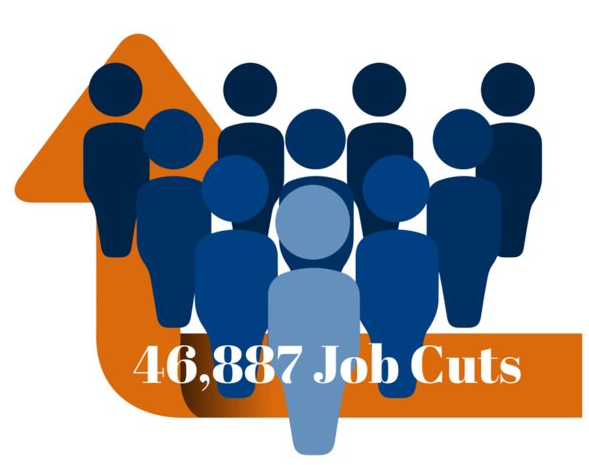 In apparent contradiction to the narrative woven by jobless claims data, a report from the outplacement consultancy firm Challenger, Gray & Christmas showed July’s announced job cuts were the second highest of the year. This month, employers announced plans to reduce payrolls by 46,887, a 49 percent monthly increase that was helped by Microsoft’s unexpectedly large layoffs. That staff reduction was the largest downsizing in the company’s history, and it surpassed the 16,000 layoffs Hewlett-Packard made earlier in the year. July’s planned job cuts were also 24 percent higher than a year ago, but the 292,921 job cuts that employers have announced this year to date is 1.3 percent below the number of planned layoffs recorded in the first seven months of 2013.

“The large job cuts in the computer industry are certainly not a sign of a stalling economy. The fact is, these are companies that are trying to adjust to where the growth is occurring. The economy is on an upward trajectory, as evidenced by the fact that 18 of the 28 industries we track have seen job cuts decline this year. Even among those with increased job cuts, the year-to-date totals are relative low by historical standards,” noted the firm’s Chief Executive John A. Challenger. “As layoffs continue to decline, along with unemployment rates, perhaps the biggest threat to economic growth going forward is the shortage of skilled workers.” Challenger argued that a number of industries and some regions of the country are already experiencing labor shortages like Houston, which has flourished due a resurgence in the energy markets.

The employment report produced by payroll processor ADP and Moody’s Analytics, a less authoritative precursor to the Department of Labor’s Employment Situation Report, confirmed that businesses are curbing layoffs and hiring more workers, which will help consumer confidence. Private, nonfarm employment in the United States expanded by 218,000 jobs from June to July, down from the previous period’s payroll increase of 281,000. “The July employment gain was softer than June, but remains consistent with a steadily improving job market. At the current pace of job growth unemployment will quickly decline,” noted Moody’s Analytics chief economist Mark Zandi in the release. “Layoffs are still receding and hiring and job openings are picking up. If current trends continue, the economy will return to full employment by late 2016.”