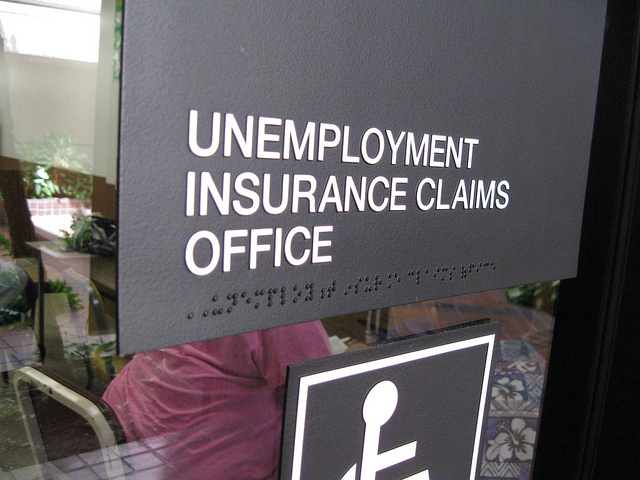 The federal government began its first partial shutdown in 17 years on October 1, after Congress failed to overcome a partisan disagreement over the temporary spending bill that would have funded operations for the beginning of the new fiscal year. The 16-day long closure gave America a front-row seat to a demonstration of how political dysfunction can damage business confidence, consumer confidence, and the economy as a whole. The manufactured crisis created climate in which businesses are hesitant to invest and hire new employees.

In order to quantify the effect the polarization of United States politics on business investment and job creation, economist Marina Azzimonti of the Federal Reserve Bank of Philadelphia created an index to measure the tone of the political debate and its impact on hiring, investment, and economic growth. “American politics have become increasingly polarized in recent decades. To the extent that political polarization introduces uncertainty about economic policy, this pattern may have adversely affected the economy,” she wrote in a September working paper released by the regional Fed branch. “Polarization significantly discourages investment, output and employment.”

To construct the index, Azzimonti measured the frequency of newspaper coverage of articles reporting political disagreement about government policy, normalized by the total number of news articles within a given period, from January 1981 to April 2013. The project did not include the recent government shutdown or the fight over raising the debt ceiling.

What the economist found is that the political polarization index fluctuated around a constant norm until the onset of the Great Recession in December 2007, at which time the data exhibited an increasing trend, peaking at the end of 2012. In 1981, the index returned a reading of 75, and by the end of last year it had neared 200.

Polarization also jumped around fiscal policy debates, including the approval of the Affordable Care Act, the debt ceiling debate, and the fiscal cliff. “Interestingly, [the index] tends to be low surrounding military conflict or national security threats such as the Gulf Wars and 9/11,” Azzimonti wrote. “This suggests that American politics are very polarized regarding economic policy or private-sector regulation reforms, but less divided when it comes to national defense issues. The Gallup disapproval ratings around these events provide independent evidence of this claim.” 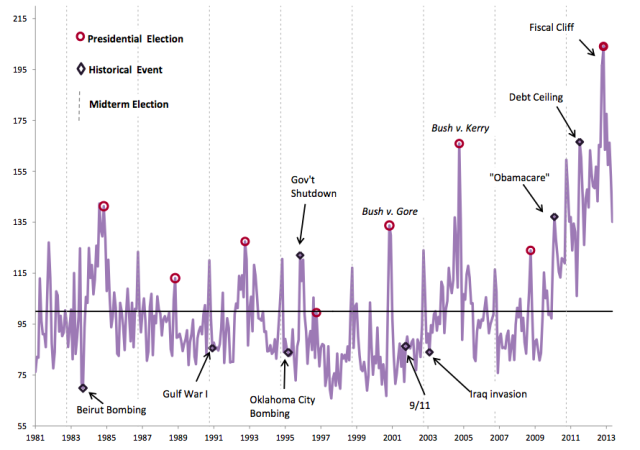 Between 2007 and 2012, during which time Azzimonti noted a significant change in the polarization trend, the index shot up 64 points. Given the importance of that period, the economist analyzed the changes in employment, output, and investment that resulted in the 64-point jump in polarization. She discovered that polarization shock did indeed cause employment to decrease, with a peak loss of 1.75 million jobs after six quarters.

Similarly, business investment fell 8.6 percent after five quarters and output dropped 2 percent. “These declines are not only large, but also persistent, which may help explain the slow recovery following the Great Recession.” Azzimonti theorized that a polarization shock increases the volatility of fiscal policy. “This in turn reduces economic activity because it increases economic policy uncertainty, which has been shown to negatively affect the economy.”

While Azzimonti’s research did not include the government shutdown or the most recent debt ceiling debate, evidence is already materializing that indicates the recent political shenanigans have hurt the United States economy. In the first days of the closure, Janney Montgomery Scott, chief fixed income strategist at Guy LeBas, calculated that a weeklong closure would shave off 0.2 percent from gross domestic product growth, while a 21-day closure could cut growth by 0.9 percent to 1.4 percent.

In a recent note to clients, BAML economist Ethan Harris wrote that “prior to the shutdown, the economy seemed to be still stuck at 2 percent growth, but with hope of stronger growth ahead. The shutdown caused both an austerity shock — cuts in government spending — and an uncertainty shock. The shutdown has hurt sentiment a lot, pushing many survey measures lower.”

On Friday, Markit released the preliminary results of its October Purchasing Managers’ Index, which showed a significant slowdown in the pace of expansion in American manufacturing this month — manufacturing output actually contracted for the first time since 2009. And thanks to the sluggish economy and dysfunctional government, consumer sentiment dropped to its lowest level of the year. According to Thomson Reuters/University of Michigan’s final reading, consumer sentiment fell to 73.2 in October compared to a preliminary reading of 75.2 and September’s final reading of 77.5.

It was the worst reading since December 2012. Job growth has shown a similar impact from the sluggish economy and dysfunctional government. Payroll employment growth has averaged just 143,000 per month over the past three months, a significant slowdown from the 224,000 created on average from April through June. “The labor market lost, rather than gained, momentum over the summer, leaving us with less than a desirable cushion just as the government was shuttered in response to political shenanigans,” Mesirow Financial chief economist Diane Swonk told The New York Times.