Picture sprawling parking lots with not a single car in sight and locked buildings hiding mounds of debris: Mannequins lie broken in piles, dead potted trees are scattered, and glass shards crunch underneath your feet. The power’s been turned off for ages, adding to the dismal, downright creepy atmosphere. It’s no wonder YouTube videos of dead malls are usually set to scary music.

Here we’ll feature 15 abandoned malls across America and show what they actually look like on the inside. Maybe you’ve been to one or two in their heyday. See which decaying mall a famous photographer called the creepiest ever (page 11) and which dead mall is set for the backdrop in the next Wonder Woman movie (page 13).

Many people remember the notorious Milwaukee serial killer Jeffrey Dahmer. One local mall had some ties to the murderer, due to a separate killing. The two-level, pioneering complex opened in 1972. It was designed as a regional center with four anchor department stores: JCPenney, Boston Store, Sears, and Gimbels.

One event triggering the mall’s demise was in 1992 when Jesse Anderson stabbed his wife to death in the parking lot. Due to this and additional crime, stores and mall-goers gradually fled. Currently, it’s a ghost town except for a Menards home improvement store. (Anderson was later killed in prison — along with Dahmer — by a fellow inmate.)

Next: Photo-seeking trespassers have broken in. 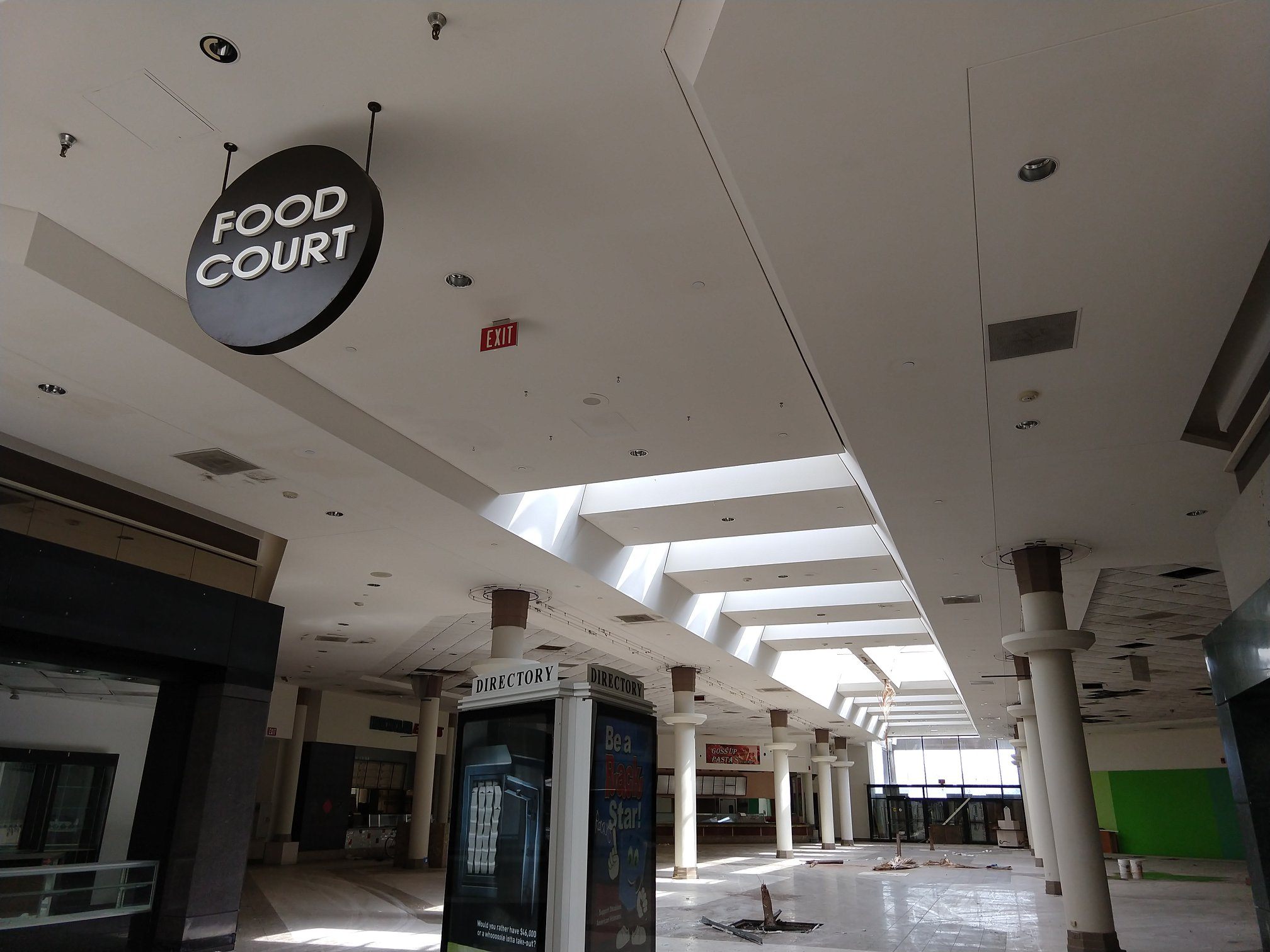 This mall in suburban St. Louis has been closed since 2014. | Deadmalls.com via Facebook

Something about decaying malls draws on people’s curiosity. At least one photo-seeking trespasser has been arrested for breaking into this abandoned St. Louis suburban shopping center. Officials are deciding on the defunct mall’s future as it sits empty since it shuttered in 2014.

The center opened in 1973 on the expectation of a residential boom that never materialized. It offered a movie theater and anchor stores including Dillard’s and Macy’s. A food court was added in 1998, but in following years, the mall was plagued by robberies and other crimes. Its fate was sealed when structural problems emerged and the power was shut off repeatedly.

Next: Bursting pipes were the last straw. 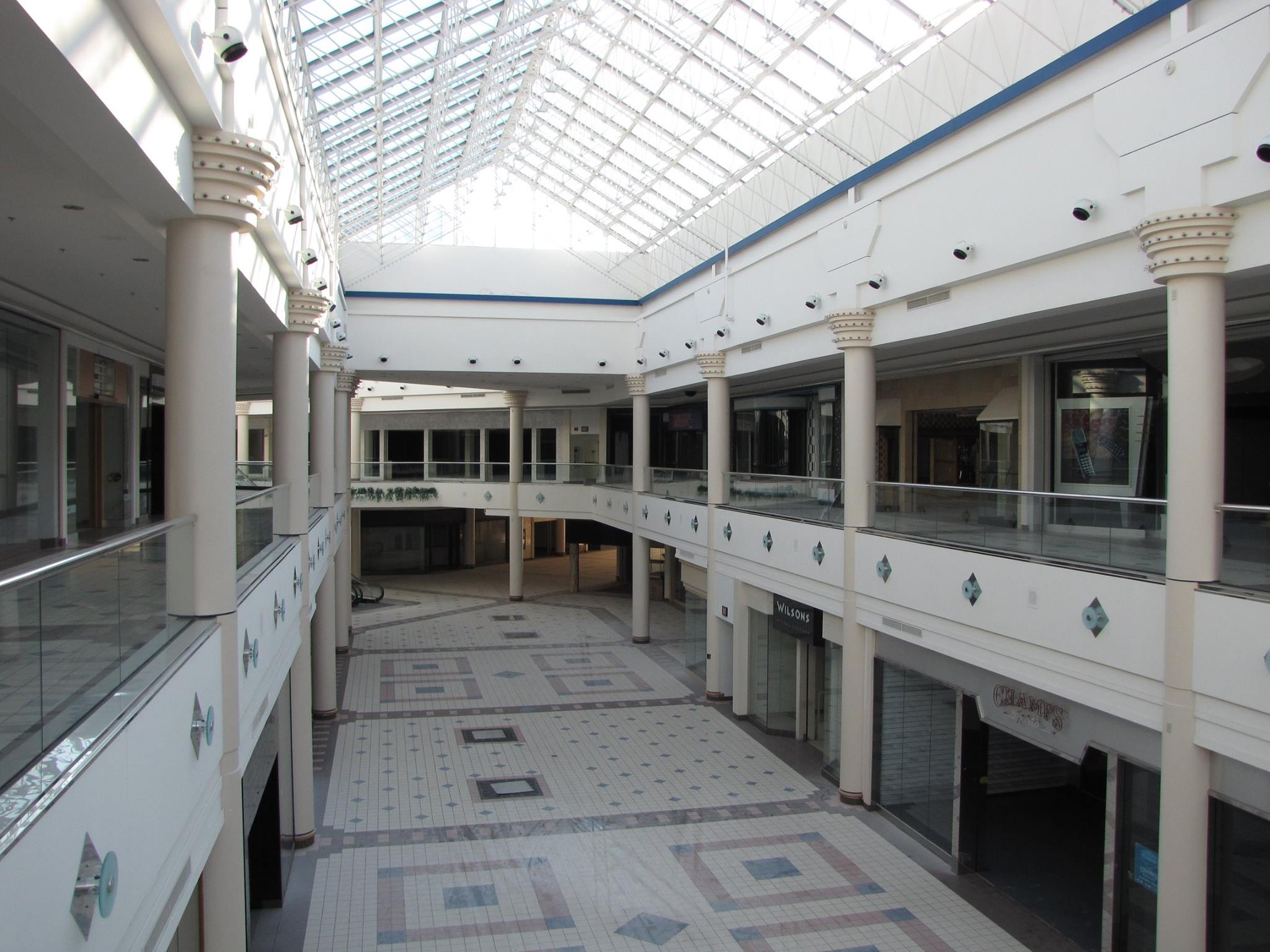 It has gone the way of so many other malls. | Deadmalls.com via Facebook

It has the makings of a tragic tale: Built in 1990 in a Rochester suburb, this mall was called a gem to behold in its heyday. Naturally-lit via skylights, it featured more than 200 retailers, a food court, fountain, and carousel. Around 2000, however, it became plagued by nearby mall competition and rumors of crime.

It was sold multiple times, and the anchor stores gradually left. Although some new stores emerged and a stand-alone Target opened in the parking lot, the mall’s prospects continued to fail. By 2009, all stores closed except for Macy’s and Sears. Bursting pipes caused major damage in 2014. It is now owned by Angelo Ingrassia who plans to redevelop it into a community center.

Next: A gang fight triggered its downfall. It was dubbed New Jersey’s saddest mall. | doggowave via Instagram

Burlington Center Mall is one of many shopping center casualties of crime and competition. It opened in 1982 to enormous fanfare, during the height of mall development and strong retail growth. However, it later fell on hard times. In a highly-publicized 2007 incident, the mall closed early one night after 20 people were injured in a gang fight there. Shoppers began to avoid the mail, causing store closures.

After pipes burst amidst freezing temperatures in January 2018, the mall closed its doors for good. Word was the Sears remained open, but the rest of what was dubbed New Jersey’s saddest mall is nothing but a memory.

Next: From biggest shopping mall ever to ghost town Amazon plans to turn the site of the mall into a fulfillment center. | zabroshennoe.official via Instagram

This 2.2 million-square-foot complex went from largest shopping mall in the world in 1976 to a ghost town plagued by crime. Over the years, car thefts, break-ins, muggings, and gang activity became commonplace. A body was found lying face-down in the snow in the parking lot. Shoppers and tenants gradually left.

A movie theater opened, but within a few weeks, gunfire erupted in its lobby. The theater eventually was burned down by arson. By 2003, the mall was at 50% capacity. In 2007, the property was in foreclosure. Ironically, online retail giant Amazon purchased the land in 2017 with plans to open an enormous fulfillment center.

Next: From a blockbuster movie to an empty shell The shuttered Hawthorne Mall now serves as a movie set. | confusion101 via Instagram

You may have seen this 40-acre mall in the movie Gone Girl and HBO’s Westworld. It enjoyed initial popularity for its affordable shops when it opened in 1977. It began to decline in the 1990s, however, thanks to competition and economic downturn.

The number of stores dwindled, and plans to add an AMC Theatre and convert to an open-air mall never materialized. The mall closed in 1999. The complex now sits abandoned, except for a supermarket, pharmacy, and restaurants on the southern end of the property.

Next: A popular family hangout became plagued by crime. 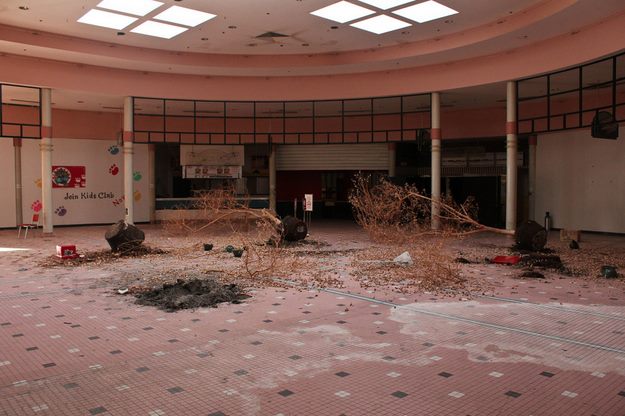 Two clerks were found stabbed to death at the Cloverleaf Mall in 1996. | Abandoned Spaces via Facebook

Cloverleaf Mall was once a popular family hangout, also described as a “cheap date’s dream-come-true,” one regular reminisced. “Couples would saunter through the corridors hand-in-hand.” Built in 1972, the idyllic mall featured 40 shops including JCPenney and Sears.

According to the Chesterfield Observer, however, things changed in the 1990s when women shoppers avoided the mall due to “youth who were beginning to congregate there.” In 1996, two store clerks were found stabbed to death. Shoppers and stores slowly departed, and the doors closed for good in 2007. 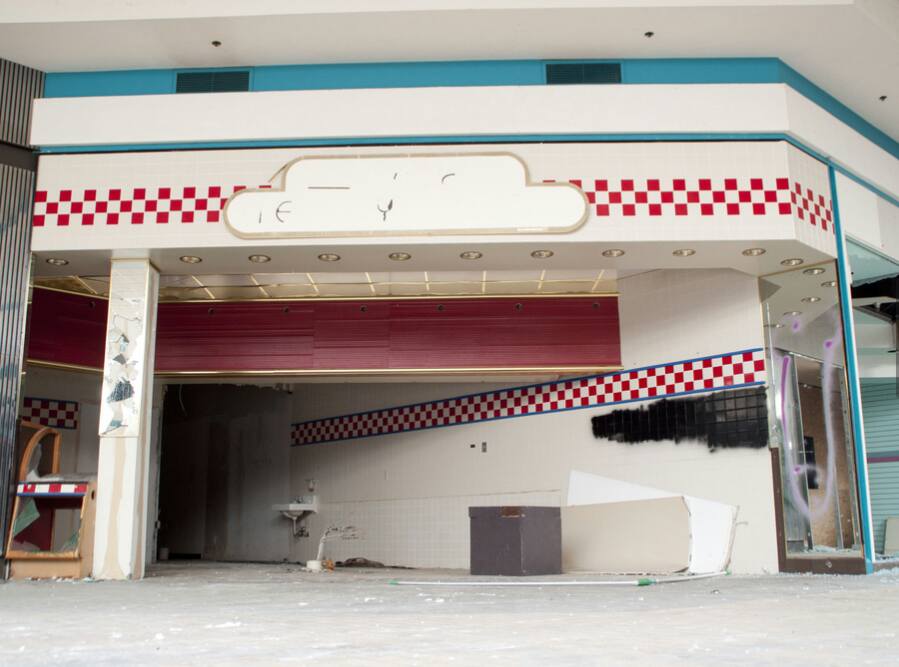 Most of the mall has been bulldozed. | DeeJay Zman‎ via Facebook

This now-gone mall has a Facebook page for shoppers who remember it fondly. The full-service shopping center near the Ohio-Michigan border drew visitors from two states after it opened in 1980. Things went well until 1988, when a nearby mall opened. The city’s declining economy also led to its demise.

As tenants continued to leave for other nearby malls, this troubled shopping center finally saw its last days in 2005. By 2017, most of the mall had been bulldozed.

Next: It closed its doors in the heart of the holiday shopping season. 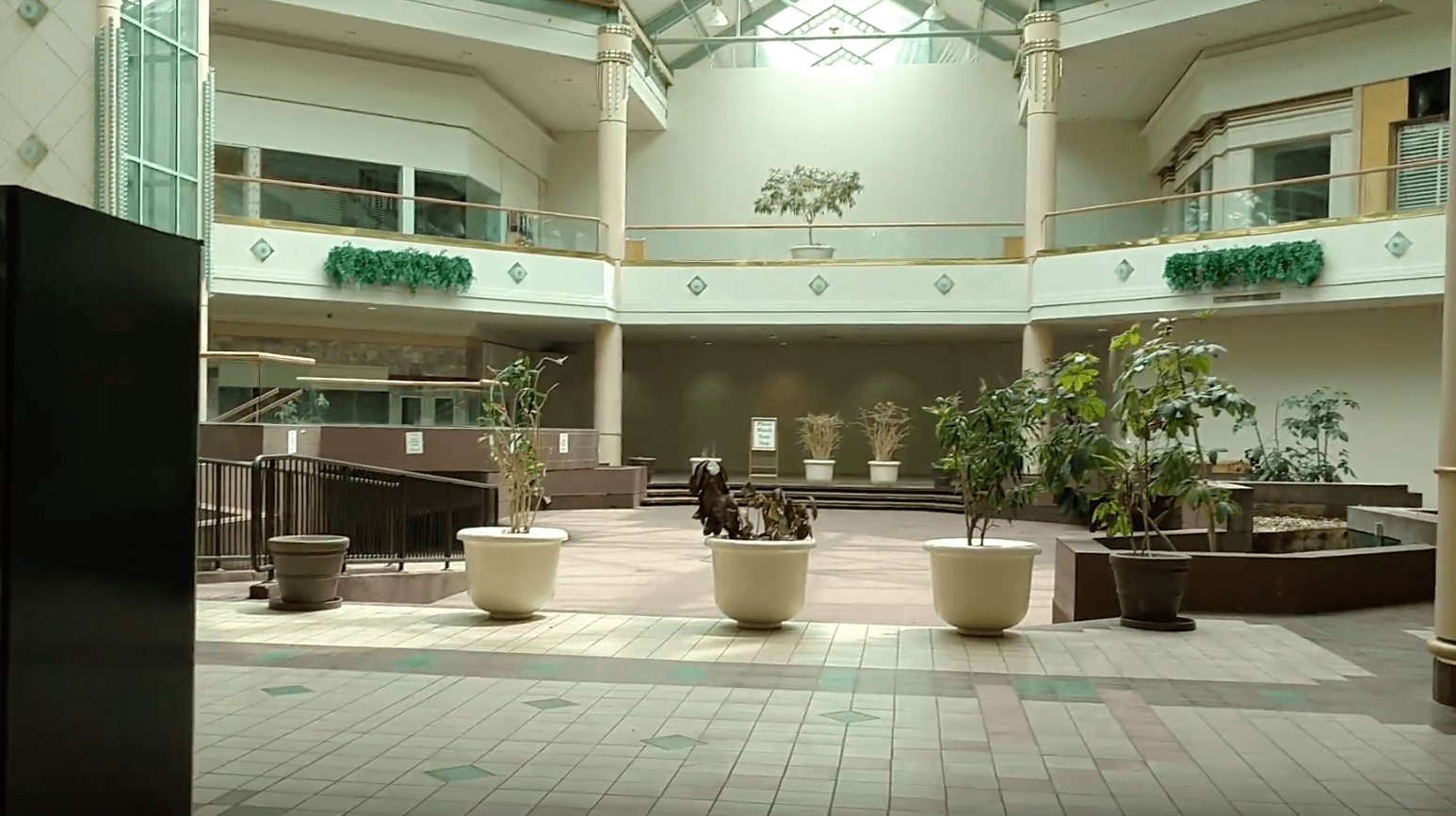 It closed during the holiday season. | Dead Malls via Youtube

This two-story mall in the Chicago suburbs closed at an unlikely time — during the busy holiday shopping season in December 2017. The complex opened in 1991 and changed ownership, names, and anchor stores over time. In 2012, it was suffering from numerous vacancies.

All that remained open when the mall closed were anchors Von Maur, Carson’s, and Classic Cinemas, and a few adjacent shops and restaurants. A plan is in the works for a new residential development onsite.

Next: Pink kiosks and green and black tile floors were no longer cutting edge. 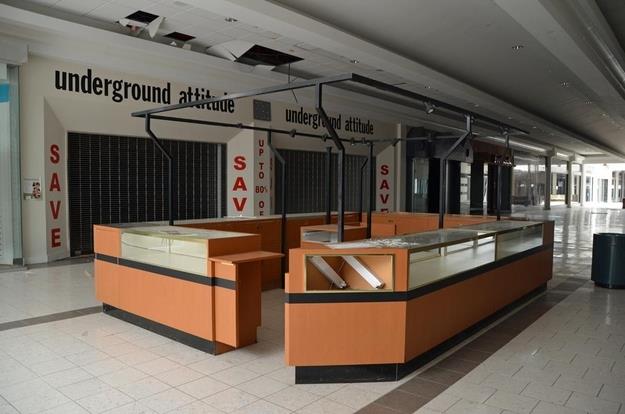 The mall was seriously dated. | The Fire Diaries via Facebook

As the first enclosed shopping mall in Lexington, Turfland Mall opened in 1967. It was popular for two decades, with several anchor stores, the Dream Machine arcade, and a Loews cinema. Nearby malls cropping up started to take away business, however. Turfland’s pink plastic kiosks and green and black tile floors started to look dated.

The mall closed in 2008 and sat abandoned until 2012, when a local businessman purchased the property and razed the enclosed mall portion. Businesses like Verizon Wireless, City Barbecue, and Burger King still lease space.

Next: From hot air balloon decor to the creepiest dead mall It shut down for good in 2014. | Donnie Rodgers Jr. via Instagram

Many adults fondly remember Metro North Mall’s hot air balloon décor and fountains of the center court. Built in 1976, it lasted longer more than most other malls in the Kansas City area, finally closing its doors in 2014.

While the mall sat abandoned, photographer Seph Lawless captured footage from inside and called it “the creepiest” dead mall. In 2017, a salvage company demolished the structure to make way for a mixed-use redevelopment.

Next: A dead malls photographer behind bars? 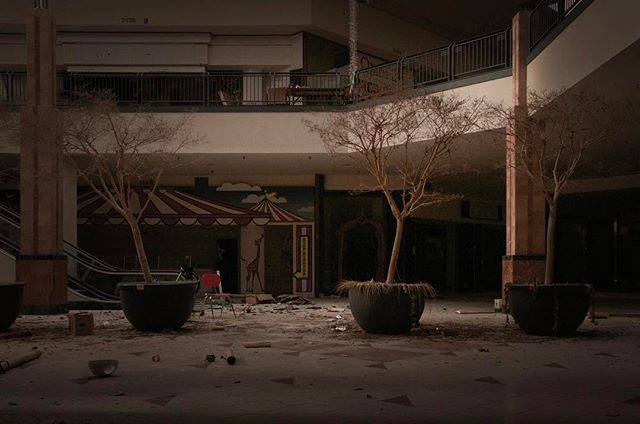 Lincoln Mall opened in the Chicago suburbs in 1973 with more than 100 stores. In time, as some of its anchor stores closed, mall traffic declined. Some said the mall lacked both a central food court and adequate security. In the midst of a 2012 renovation, mall owners went broke, and a court ordered the mall’s closing. Video from inside the abandoned mall showed dead trees, mannequin pieces, glass shards, and hanging strings of lights.

In 2016, photographer Seph Lawless’ Lincoln Mall photographs went viral, causing others to try and sneak into the building. Lawless said authorities eventually arrested him to set an example to the others.

Next: Setting for a major motion picture This dead mall may be a filming location for Wonder Woman 2. | ridzdesign via Instagram

Even dead malls sometimes have value: Plans are to film Wonder Woman 2 starring Gal Gadot inside now-defunct Landmark Mall in 2018. Built in 1965 as an outdoor mall, it was enclosed in 1990. However, anchors gradually departed, and after Macy’s left in 2017, the entire mall was shuttered.

The spot will eventually be transformed into an urban village with restaurants and a movie theater. A homeless shelter was also temporarily set up onsite.

Next: A brutal murder led to its downfall. 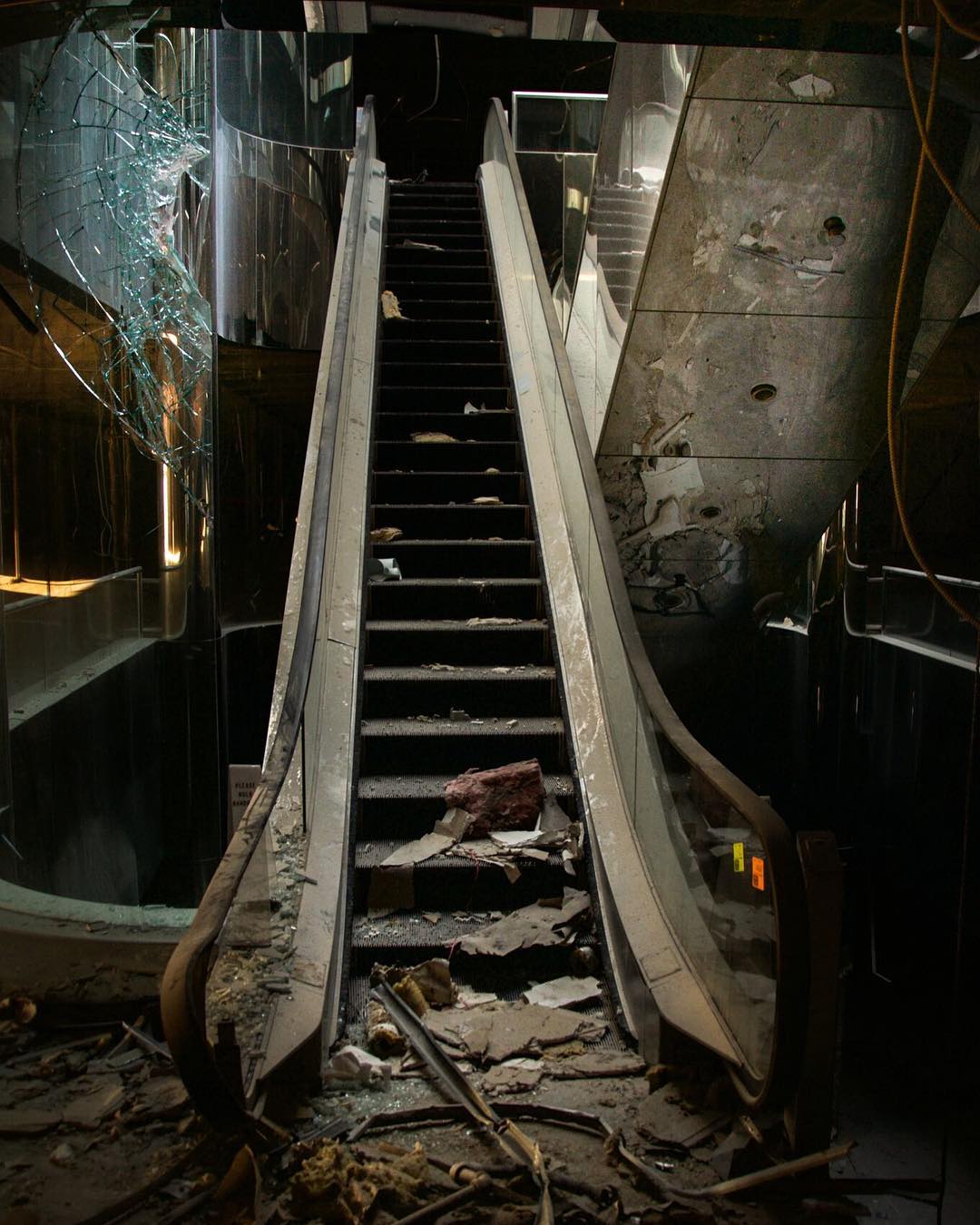 It’s hard to imagine that this was once an upscale shopping center. | Seph Lawless via Facebook

This upscale, Baltimore-area mall opened 1986 with a seemingly bright future. Higher-end retailers included Saks Fifth Avenue, Benetton, and Williams Sonoma. However, business declined when 28-year-old shopper Christina Marie Brown was murdered on the path to a nearby metro station in 1992. Police determined the motivation was robbery.

Gradually, both shoppers and stores left. The mall closed in 2015 and sat empty except for dead palm trees, smashed glass, and a dried-up fountain. In 2017, it was completely demolished, with plans to redevelop it into a new shopping center with up to 30 stores, including a Costco and remodeled AMC Theatre.

Next: Was it a mall or an arboretum? 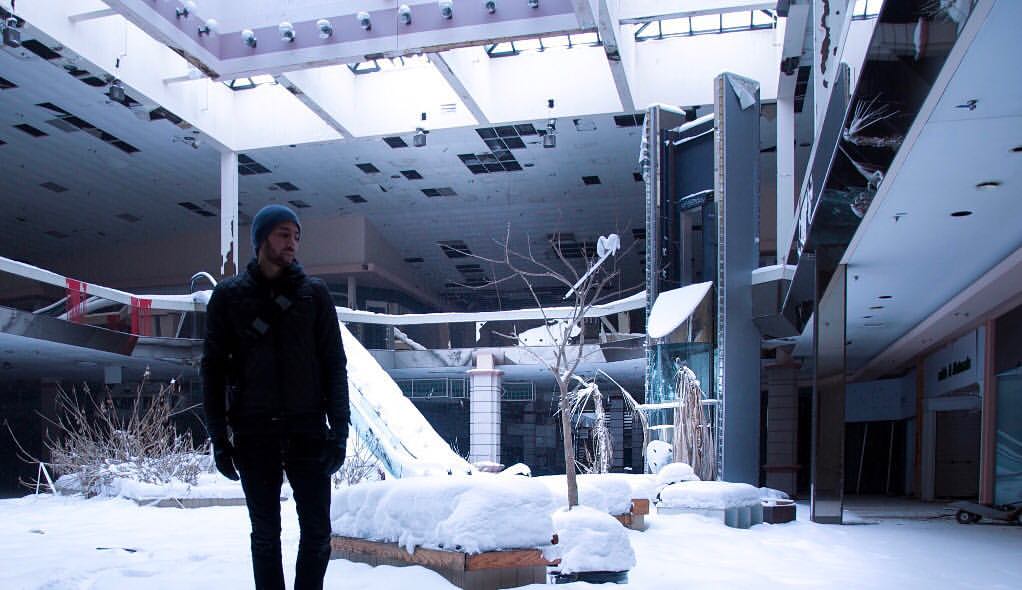 There were serious money problems. | Seph Lawless via Facebook

It sounds more like an arboretum than a shopping mall: When it opened in 1975, the stunning Rolling Acres featured an abundance of lush trees and shrubberies. A water fountain exploded toward the glass ceiling. A local Cleveland newspaper calls it “the cherry on top of Akron’s blossoming indoor retail scene” in its heyday.

What caused its downfall? Some merchants complained it wasn’t being kept up. It also was plagued by money problems and eventual hefty competition from surrounding areas. It eventually ended up closing its doors in 2008.