Warren Buffett once said, “In business, I look for economic castles protected by unbreachable moats.” The castle is a metaphor for a company, and the moat represents a strong competitive advantage. Naturally, a wider moat offers more protection in the long term. The Oracle of Omaha has provided an onslaught of wisdom over the years, but this piece of insight is more evident than ever and one of Buffett’s best quotes.

Corporate America is a battlefield with an endless supply of warriors trying to breach moats in pursuit of profits. In a 2007 letter to shareholders, Buffett explains, “A truly great business must have an enduring ‘moat’ that protects excellent returns on invested capital. The dynamics of capitalism guarantee that competitors will repeatedly assault any business ‘castle’ that is earning high returns.”

A powerful worldwide brand is one of the most recognizable economic moats. While it’s considered to be an intangible asset, the world’s largest brand equity database has a formula to measure brand value in dollar terms. Calculating variables such as branded earnings, financial value, and brand contribution, BrandZ finds the most valuable 100 brands around the globe grew their worth 14% to $3.3 trillion in 2015, compared to $2.9 trillion in 2014 and $2.6 trillion in 2013. Apple’s brand value ranks first at $247 billion.

Interestingly, the stock performance of the most valuable brands easily outperformed the broad market. To little surprise, Buffett’s Berkshire Hathaway owns several of these brands.

Heeding Buffett’s lesson on economic moats and powerful brands has been rewarding over the past decade. Since 2006, a portfolio filled with BrandZ’s top 100 brands has crushed the S&P 500. As the chart below shows, BrandZ’s portfolio more than doubled, while the S&P 500 and MSCI World Index gained 63% and 30%, respectively. 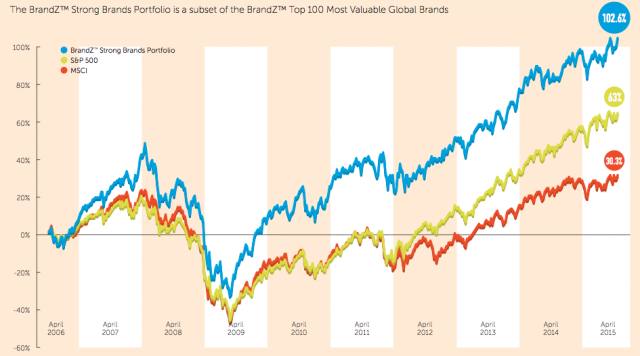 “Brand is among the most valuable financial assets of modern corporations. Brand contributes more to shareholder value creation than any other asset – tangible or intangible,” said Doreen Wang, Global Director for BrandZ. “Strong brands help drive sales, grow market share and build shareholder value. They’re a key to the success of many of today’s leading stock market winners. Valuable brands deliver superior return to their shareholders.”

Berkshire Hathaway held a position in four of the top 10 most valuable brands, as of the end of March: IBM, Visa, Verizon, and Coca-Cola. In fact, Verizon grew its brand value 36% from last year, making it one of the best performers in the top 100. Overall, Berkshire Hathaway held positions in 15 of the 100 most valuable global brands. Procter & Gamble — Berkshire’s sixth largest position — made the list twice with Pampers and Gillette. Other positions that made the most valuable brands list include Wells Fargo, Costco, American Express, Wal-Mart, and Bank of America.