How Much Should You Tip in America? 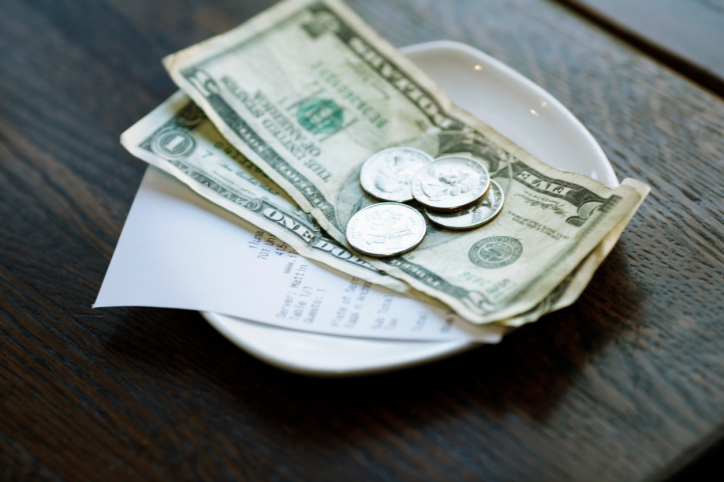 Tipping is a very contentious issue. Most of us grew up with it being a part of many daily transactions — adding a percentage on to a bill at a restaurant, throwing a buck at a door man or valet, or simply dropping our extra change into a bucket at a cash register. A lot of people don’t think about it, as tipping has become more or less ingrained into American culture, and the American economy.

But things are changing. With all of the economic distress over the past decade, and new and sometimes wide-ranging government regulations coming into play, tipping is becoming more talked about than at any time in the recent past. That, of course, begs the question as to who and what you should tip, and where.

Tipping, traditionally, was a rare occurrence. It was meant only as a very special nod of appreciation to someone providing a service, who clearly went above and beyond their role. Or, to ensure that service would be fast and deliberate. Since then, it’s become a ubiquitous part of the service industry. It’s become expected, although largely unspoken, that patrons basically pay a portion of the staff’s wages — an ingenious way for employers to offload labor costs. And that’s really where we’re starting to see a problem.

Employers have actually managed to have tipping codified into law, in some ways. Just look at minimum wage laws. Many states only require “tipped positions” be paid a fraction of the actual minimum wage. That’s because patrons are expected to pitch in for the rest. While it’s true that employers do have to make up the difference if an employee’s tips don’t add up to at least the minimum wage on an hourly basis, it’s rather common knowledge among service professionals that employers don’t stand for that; if you are going to cost them more in labor expenses, they’ll probably find a way to replace you.

What we’re left with is an entire industry that is dependent on tips — and though some waiters and bartenders might make a nice living from it, the premise as a whole doesn’t sit well with a lot of people.

These days, tipping provides an incentive for service staff to be on top of their game. But as the economy shifts, and new minimum wage laws come into play, people’s views are changing on how, and when, they should tip.

What’s really made the issue so contentious lately is that minimum wages are on the rise, and in some cities, are as high as $15 per hour. From a patron’s standpoint, if an employee is making a livable wage, then they are, and should be, free from having to add on a gratuity. After all, since employers are now paying higher wages, they’ve probably incorporated that additional expense into the price of their product or service.

And there are a lot of people who are no longer tipping. There’s nothing wrong with that in most cases, unless you decide to go about it the wrong way. If you feel that service was subpar, or that the staff at whatever business you are patronizing is being paid fairly, then don’t tip. The overwhelming majority of service professionals can take it in stride and forget about it, while still providing you an adequate amount of attention.

So we come to the center of the shrubbery maze: when you’re in different parts of the country, how much, if anything, should you be throwing down in gratuity? It depends. For those states in which service people are completely dependent on tips, it’s customary to tip between 20-25%. Yes, it’s a lot, but remember: your server didn’t write a $2.13 minimum wage into law. Employers lobbied for it.

Here is a snapshot of the U.S., and the required minimum wage per hour for ‘tipped positions’. 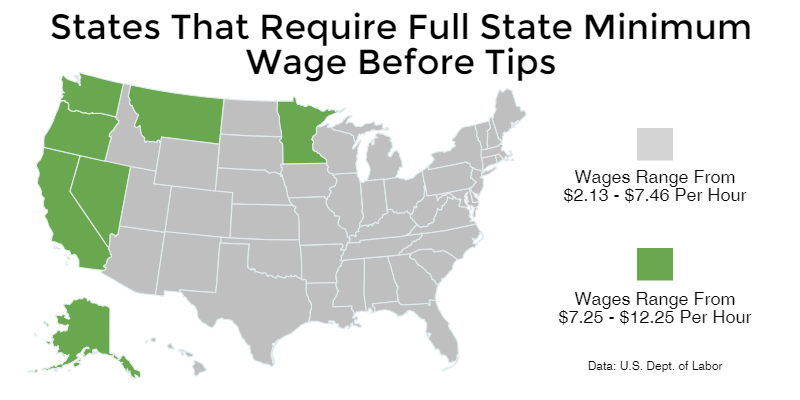 Data from U.S. Dept. of Labor//Graphic by Sam Becker for The Cheat Sheet

Now, in that list of states that require employers only pay $2.13 per hour, a higher tip is definitely expected. In those ‘in-between’ states, where wages range from the federal $2.13 minimum for tipped employees to the actual federal minimum wage of $7.25, a relatively high tip is also common — somewhere in the 10-20% range.

For the few states that are higher than that (the green states in the map above), it’s still customary to tip between 10-20%, though many people are starting to leave lower percentages, and not tip at all.

So, for a quick recap, the amount you should tip depends on what state or city you’re in. And yes, you’re always free to leave nothing, especially if the service was bad.

For those that do hate the tipping custom, there are some changes on the horizon. Seattle, San Francisco, and Los Angeles have all opted to raise their minimum wages to $15 per hour, in an attempt to ensure a living wage for their lowest earners. In response, some restaurants in those cities have opted to go ahead and ban tipping outright, seeing as how their staff is now making a relatively fair wage. That’s good for patrons, and it’s also good for the employers, who are taking the pressure off of their customers.

But by and large, it’s still up to you to determine how much you want to tip, and how deserving the staff is of your gratuity. Even if you’re in Seattle or Los Angeles, it’ll probably reflect poorly on you if you don’t tip your server after a very expensive meal at a five-star restaurant. But again, it’s up to your discretion.

There are different rules in different cultures and countries, and tipping has also made its way into other elements of the economy as well, so be wary. You may feel pressured to tip on take-out orders, when you buy a cup of coffee, or even when you get a haircut. Nobody expects you to tip 20% on a cup of black coffee at Starbucks, mind you, but it’s still something that has become rather ubiquitous.

Until tipping finally goes extinct in the U.S. (which could take generations, if it ever happens) most of us will play along and eat the cost. The important thing to remember is that it’s not the service staff who are to blame, so unless they’re doing a horrible job, save your complaints for the employers and lawmakers.