Your Salary vs. the CEO: How Will Your Pay Raise Compare? 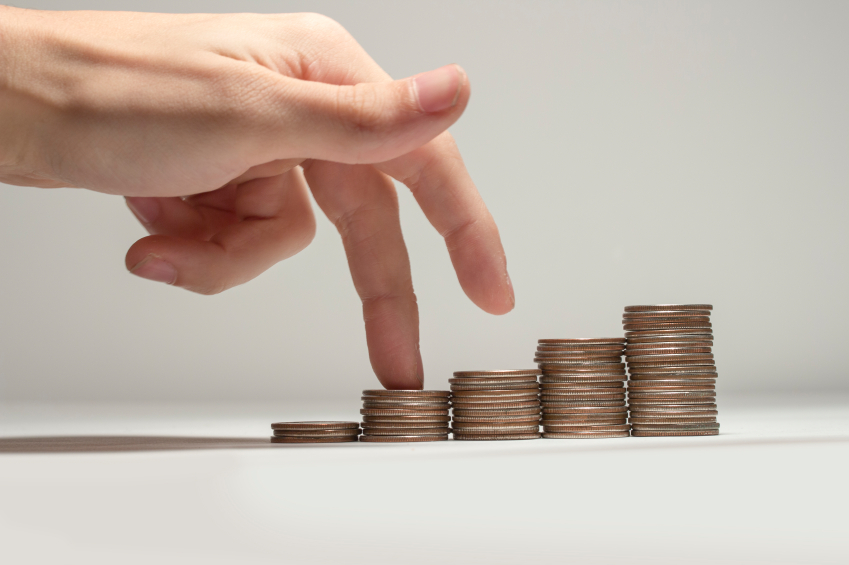 Looking forward to a substantial raise next year? Well, you’re probably not exactly holding your breath. Recent economic conditions have demonstrated just how quickly mild wage gains can be eaten up by inflation, especially when we look at those changes month by month. From April to May 2015, for example, a 0.3% average bump in pay was offset by a 0.4% increase in the consumer-price index, meaning inflation-adjusted earnings actually dropped 0.1%, according to the Bureau of Labor Statistics. Year-over-year, of course, the situation is not so dreary: From May 2014 to May 2015, real average hourly earnings went up 2.2%.

Many employees come to expect a yearly pay raise, however small, provided they’ve been doing their job well. But have you ever wondered how much of an increase your boss sees? Or your boss’s boss? How will your 2016 pay raise compare to your CEO’s? The answer — as with most worthwhile questions — is complicated.

First, let’s look at what an average worker can reasonably expect. In its survey of more than 1,100 companies in the United States, Towers Watson found that employers are planning to award about a 3% annual salary increase to employees in 2016. “To a large extent, 3% pay raises have become the new norm in corporate America,” said Sandra McLellan, North America practice leader, rewards, at Towers Watson. “We really haven’t seen variation from this level for many years.”

Mercer’s annual compensation survey, which includes 1,504 mid-size and large employers across the U.S., showed similar projections for raises in 2016. The graph below shows Mercer’s projections alongside the actual averages recorded in the last five years. 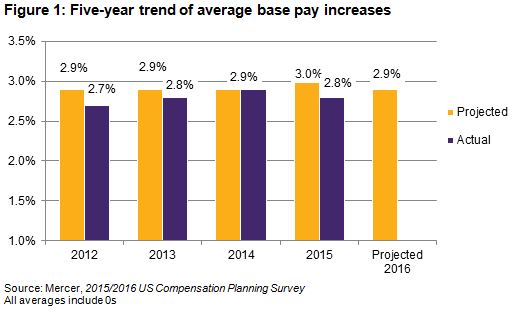 While modest, at least a 3% raise is currently well ahead of inflation. Interestingly, both Mercer and Towers Watson show pay raises for “executive and management” positions projected at roughly the same percentage. But keep in mind that these figures didn’t specifically single out CEOs. It can be difficult to compare apples to apples when it comes to pay raises at these levels, of course. According to a separate Mercer report focused on CEO compensation, chief executives’ base salaries changed little in 2014 but accounted for only about 10% of a CEO’s total compensation. It’s the performance bonuses that have increased dramatically, particularly long-term incentive pay, which grew by 6%. More than 90% of the S&P 500 have shifted primarily to a pay-for-performance model.

What is painfully clear is that total CEO compensation — no matter what form it takes — is getting out of control. When we look at overall compensation growth, rather than pay raises alone, the disparity is easier to see. And the good news is this compensation gap will soon be more transparent than ever, after the SEC’s August 2015 decision that will require most public companies to regularly reveal the ratio of the chief executive’s pay to the median pay of the employees. The new rule is set to go into effect in 2017.

Until that time, one resource to look to is the Economic Policy Institute’s 2015 analysis of CEO pay at the largest firms, which revealed that America’s top CEOs are now raking in 303 times more than the average worker. Since 1978, inflation-adjusted CEO pay has jumped 997% (nearly double stock market growth), while compensation growth for the average worker grew only 10.9%, according to the report. Average CEO compensation was $16.3 million in 2014, an increase of 3.9% from the previous year and 54.3% since 2009.

Not only are CEOs making more money than the average worker, they’re also paid much more than other top wage earners. According to the Institute, CEO compensation in 2013 was nearly six times greater than the wages of the top 0.1% of wage earners.

A common argument to justify CEOs’ high salaries is that these people are a worthy investment. Supposedly, their talent and superior job performance makes it all pay off for the company in the end. But according to a 2014 study examining CEO incentives in relation to future stock price performance, the companies with the most generously rewarded CEOs tend to see the worst results.

Lawrence Mishel, president of the Economic Policy Institute and co-author of the Institute’s report, rejects the notion that CEO compensation is proportional to skill. He argues that CEOs and executives are seeing exponential growth in pay at the expense of average workers.

“The claim is that high CEO pay is a marker for talent,” Mishel told USA Today. “This data would suggest that executives are not only 300 times more talented than the average worker, but also six times more talented and valuable than other people in the top one-thousandth of earners.”