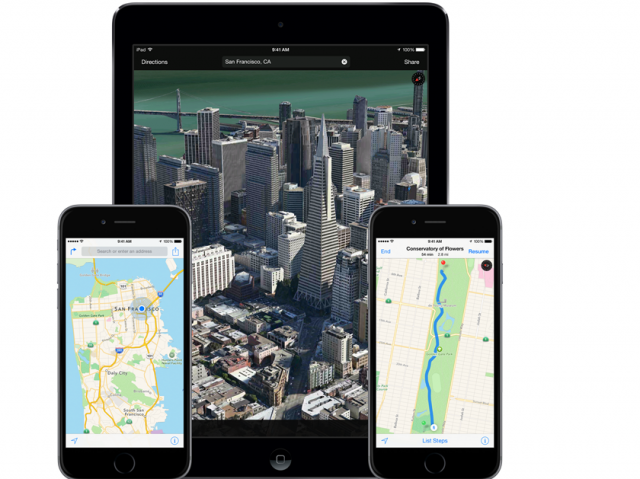 Apple is quietly continuing its efforts to improve its much-maligned native Maps app that originally launched as part of iOS 6 in September 2012. According to a report from Apple Maps Marketing that was first spotted by 9to5Mac, the iPhone maker has greatly expanded the number of companies that it sources its map data from. 9to5Mac reports that Apple has traditionally relied on TomTom and its own in-house sources for its Apple Maps mapping data. However, in response to Apple Maps Marketing’s attempt to submit a list of business locations through Apple’s Business Portal, the California-based company revealed a list of 10 new data provider partners that were previously unknown.

Besides including previously known data providers such as Factual, Yelp, and Neustar/Localeze, the list from Apple also features DAC Group, Location3 Media, Marquette Group, Placeable, PositionTech, SIM Partners, SinglePlatform, UBL, Yext, and Yodle. According to Apple Maps Marketing, being cited as an official business listing information source is a “huge windfall” for these companies. On the other hand, Apple Maps partner Acxiom was missing from this list of partners for unknown reasons.

More importantly for Apple users, the expanded number of mapping data providers will greatly improve the location labeling in Apple Maps. Besides featuring many meme-worthy, distorted 3-D images of geographic features and famous landmarks, the first iteration of Apple Maps was also known for having mislabeled locations. These mislabeled locations sometimes resulted in Apple Maps giving wildly incorrect directions to its users. In one widely publicized incident in 2012, several Australian Apple Maps users became stranded in a dangerously isolated area after Apple Maps directed them 43 miles off course, reports CNET.

Apple Maps’ many glitches eventually led Apple CEO Tim Cook to issue a statement that apologized for the app’s problems and invited users to download alternative map apps from the App Store. The addition of 10 new companies providing data for the company’s iOS and OS X-based map applications should go a long way in bolstering the quality of Apple Maps.

The recent addition of new data providers is not the only move that Apple has made to improve Maps. The company has acquired at least half a dozen mapping-related companies and startups over the past year: indoor GPS company WifiSLAM, location data company Locationary, Geographic Information Systems (GIS) data company BroadMap, social mapping app Spotsetter, and mass transit navigation apps HopStop and Embark. Apple also hired Philip Stanger, the CEO and cofounder of an indoor positioning company called Wifarer, according to a report from TechCrunch earlier this year.

It is unknown if Apple is planning to implement a major overhaul to Apple Maps, or if it will use its improved mapping resources to make incremental changes to the app. Either way, it appears that Apple Maps is on the right track to becoming an app that meets the company’s high standards of usability and quality.