The development of flat panel display technology has enabled manufacturers to create television sets and computer monitors with amazingly thin profiles. However, displays aren’t the only consumer electronic gadgets that have developed slimmer profiles over the past several years. Sound bars are long, compact speaker enclosures that provide a perfect complement to the similarly slender displays used in today’s home entertainment systems.

With so many products from different manufacturers on the market, it can be difficult for consumers to determine which sound bars are the best deals. Some of the technological specifications and optional features that sound bars offer include number of speaker channels, types of inputs, wireless capability, 3D passthrough option, and more. However, perhaps one of the most important specifications to be aware of is the difference between active and passive sound bars. Active sound bars are powered by built-in amplifiers, while passive sound bars need to be hooked up to a separate receiver component in order to operate correctly.

Since sound bars are generally preferred for for their ease of setup and smaller size, we have opted not to include any devices that require a separate receiver component on our list of top ten sound bar products. We have also chosen to focus on products that feature at least 200 watts of power and are sold in combination with a subwoofer. Although sound bars can deliver an impressive range of sound in relation to their size, 200-plus wattage and the inclusion of a subwoofer will ensure that an audio system has sufficient volume and bass.

Other than the special criteria noted above, the products featured on this list are ordered according to the Smart Rating scores provided by FindTheBest. We also verified the quality of each product at various other prominent tech review websites, such as PCMag, CNET, and more. Finally, it should be noted that the prices listed for each product will either be the currently available price as cited by FindTheBest, or will be the manufacturer’s suggested retail price (MSRP), whichever is lower. This means that the prices for each product may vary based on where you are shopping. Keeping those caveats in mind, here are the 10 best sound bar and subwoofer combinations with over 200 watts of power. 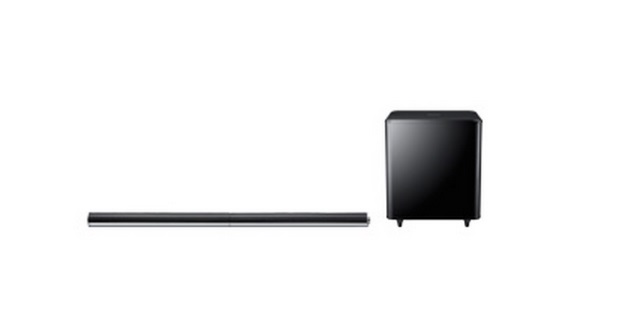 The Samsung Audio Bar HW-E551 may be most notable for the versatility it offers for installation. Besides offering the usual wall mounting and horizontal tabletop setup options, the HW-E551 also gives users the option to separate the sound bar into two separate vertical speaker stands. The wireless subwoofer also provides flexibility by allowing users to place the bass speaker wherever they like without having to worry about the length or placement of a cable.

The Samsung Audio Bar HW-E551 has an overall power output of 310 watts (150 watts subwoofer output) and features 2.1 channels via two midrange speakers and a subwoofer. The HW-E551 includes a 3D Passthrough feature, which — as the name suggests — allows a 3D signal to “pass through” the device unaltered. This is a good feature to have if you want to ensure that your 3D entertainment system can support a 3D video signal. For inputs, Samsung’s device offers analog audio, Bluetooth (for music playback), HDMI (two), and USB. Dolby Digital and DTS decoding is supported. Although FindTheBest doesn’t list simulated surround sound as one of this device’s features, Samsung’s product description page notes that HW-E551 includes 3D Sound Plus, which Samsung describes as a feature that “adds depth and spaciousness to your listening experience.” 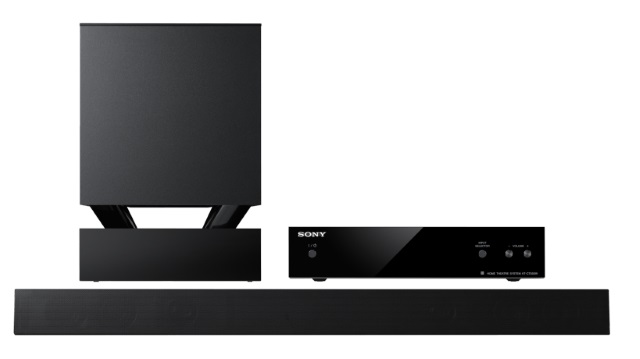 With an overall power output of 400 watts (134 watts subwoofer output), Sony’s 2.1-channel HT-CT550W model is specifically designed for televisions that are 40 inches or bigger. A standalone input/output box provides plenty of connection options, including inputs for analog audio, digital coaxial, digital optical, HDMI (three), and SPDIF. On the other hand, some users may consider the third component of this system to be a downside since sound bar/subwoofer combos typically only include two components. 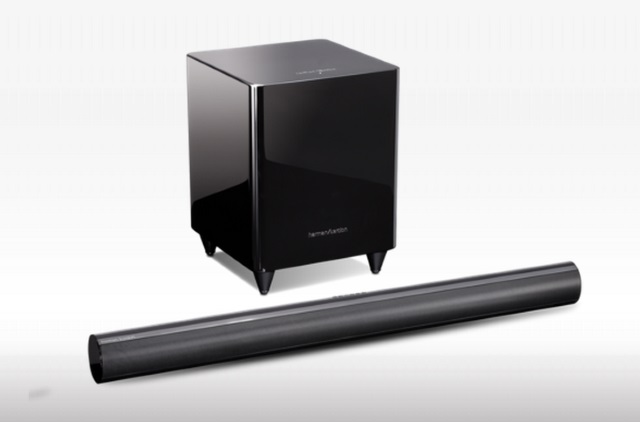 Although pricier than many other 2.1-channel sound bar/subwoofer combos, the Harman/Kardon SB 30 also includes more speakers than most 2.1-channel systems. The 46-inch sound bar is packed with six midrange speakers and seven tweeter speakers, while one wireless subwoofer provides the lower bass frequencies. The device has an overall power output of 330 watts (100 watts subwoofer output) and offers simulated surround sound via the company’s proprietary “Wave” technology.

The usual tabletop and wall mounting options are offered for the sound bar component, while the wireless subwoofer can be placed anywhere in the room. For inputs, the Harman/Kardon SB 30 includes analog audio, digital coaxial, digital optical, and SPDIF, but no HDMI ports. Supported audio formats include Dolby Digital (Other) and DTS. 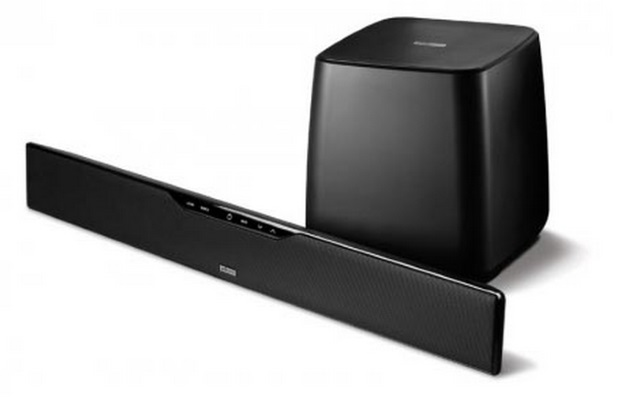 With an overall power output of 280 watts, this 2.1-channel system relies on four midrange speakers and a wireless 120-watt subwoofer. It offers a 3D Passthrough feature and the standard tabletop and wall mounting options.

For inputs, the Polk Audio SurroundBar 6000 IHT includes analog audio, composite, digital optical, SPDIF, and a 3.5 millimeter mini jack, but no HDMI. One major downside to this unit is that it only supports Dolby Digital (Other) and not the widely used DTS format. 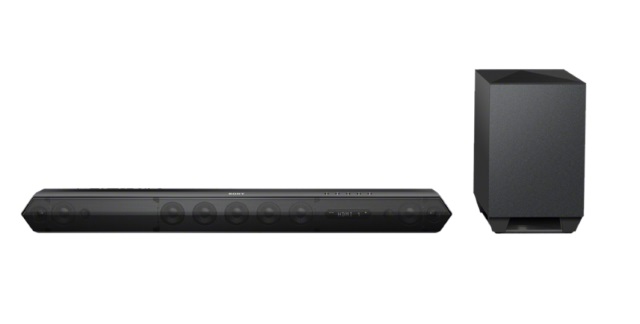 This relatively expensive sound bar/subwoofer combo offers the most channels (7.1) and features of any of the other devices featured on our list. The Sony HT-ST7 has an overall power output of 450 watts, including a subwoofer with an output of 100 watts. The 7.1 channels of sound are delivered through five midrange speakers, two tweeter speakers, and a wireless subwoofer. Besides offering the fairly standard 3D Passthrough feature and simulated surround sound, the Sony HT-ST7 includes a wireless connectivity feature that allows an NFC or Bluetooth-compatible mobile device to be paired with the system by simply touching the device to one of the sound bar’s corners.

The Sony HT-ST7 includes a wide range of input options, including analog audio, Bluetooth, digital coaxial, digital optical, HDMI, headphone jack, and an iPod connection. Supported audio formats include Dolby Digital (Other), Dolby TrueHD, DTS, DTS 96/24, DTS HD. One of the few areas where the HT-ST7 doesn’t offer a lot of options is for mounting, since the sound bar is only designed for tabletop use. 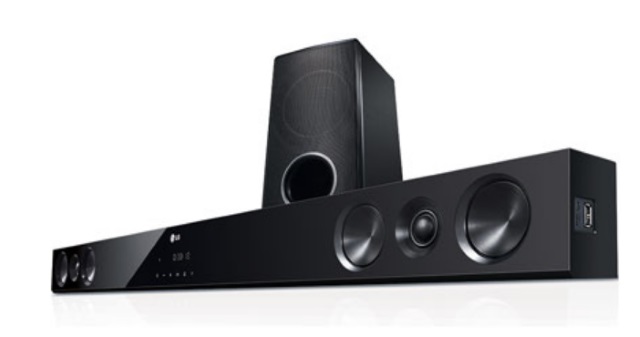 For inputs, the LG NB3520A offers Bluetooth, analog audio, digital optical (two), USB, and a 3.5 millimeter mini jack. Unfortunately, the lack of an HDMI input means that the system has limited audio format options, although it does support Dolby Digital (Other) and DTS. On the other hand, it includes an upscaling feature called “Music Retouch” that will supposedly improve lower quality audio. The LG NB3520A sound bar can be mounted on the wall or simply set on a tabletop. 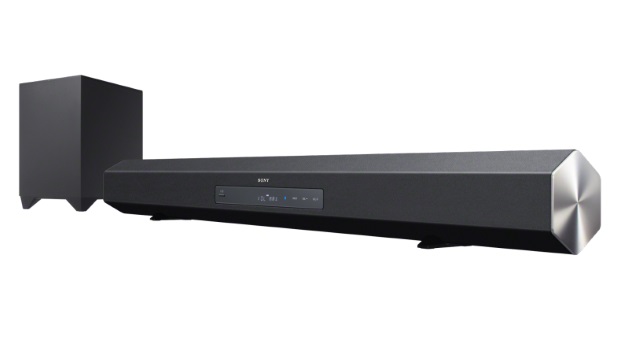 Perhaps the most distinctive feature of Sony’s budget HT-CT260 sound bar/subwoofer system is the sound bar’s unique hexagonal design, which could be a downside for consumers that want a less obtrusive device. The HT-CT260 has an overall power output of 300 watts with 2.1 channels of sound delivered through two 85-watt midrange speakers and a 130-watt wireless subwoofer. 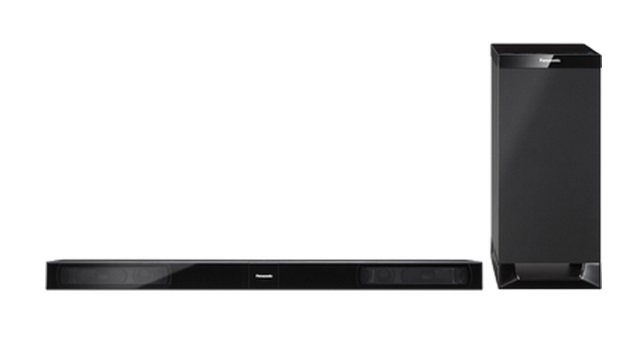 The Panasonic SC-HTB20 delivers 2.1 channels of sound via two 65-watt midrange speakers and a 110-watt wired subwoofer. However, with an overall power output of 240 watts, the Panasonic SC-HTB20 has the least power of all the sound bar/subwoofer systems featured on our list. Even so, with a low price and a fair amount of features and inputs, the Panasonic SC-HTB20 garnered high marks from FindTheBest. One of the few drawbacks to this system is its lack of a wireless subwoofer, which means users may have limitations on where they can place the bass speaker. 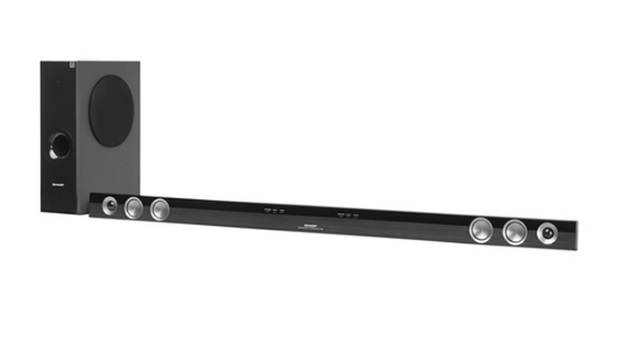 Although this 310-watt, 2.1-channel sound bar/subwoofer system has an MSRP of $500 on the official Sharp USA website; various online retailers sell it for as low as $348, according to FindTheBest. The unusually long sound bar (54.5 inches) is designed for use with 60-inch televisions and features four midrange speakers and two tweeters that output 160 watts of power, while a wireless subwoofer outputs 150 watts. The sound bar can be mounted on the wall or simply placed on a tabletop in front of the television. 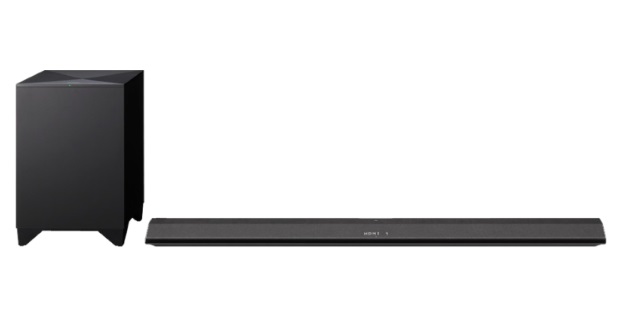 Topping our list of best sound bar and subwoofer combos over 200 watts is Sony’s well-rounded HT-CT770 model. It has an overall power output of 330 watts (120 watts subwoofer output) and features 2.1 channels of sound delivered via two midrange speakers, two tweeter speakers, and a wireless subwoofer.