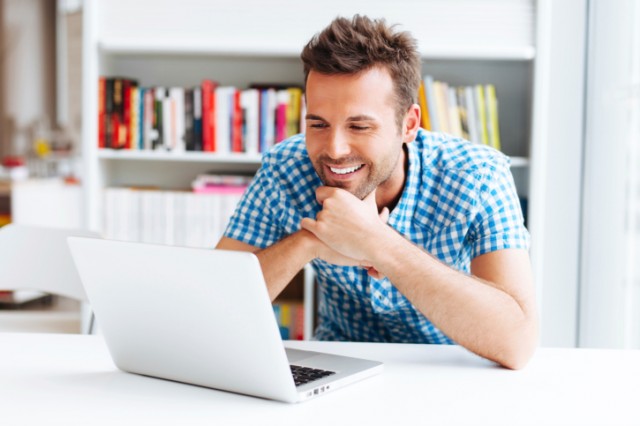 Do you scour the Internet for the most innovative new apps, tools, and websites to test out and share with your friends? Then look no further. Each week, we look at the crowdsourced links posted to a website called Product Hunt, where users post their best finds and the community discusses and votes for their favorite new apps and tools. Between 600 and 800 venture capitalists reportedly use the site — a great testament to its ability to surface products that would otherwise fly under most people’s radars — and Product Hunt recently raised $6 million in funding, with Andreessen Horowitz leading the round.

Product Hunt offers a look at what’s new every day on its homepage, and anyone can submit a product. Users can either sign up for emails to be updated on the community’s best finds or can check back each day to see what turns up. The products posted each day collect upvotes, which partially factor into the order in which the posts are ranked at the end of the day. 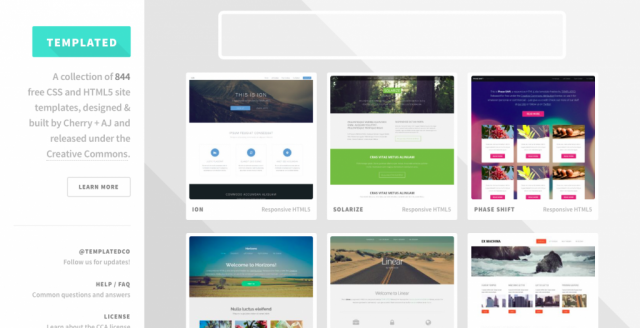 Templated came in first on Sunday, with 405 upvotes as of Monday. The site provides a free collection of CSS, HTML5, and responsive site templates, released under the Creative Commons Attribution license. The templates are built by developers Cherry and AJ, and act as the starting point for a website. Users can work with the templates in “almost any” text or code editor. The site notes of the motivation behind Templated, “Freebies are a great way to experiment with random new ideas, and as some of them might actually end up being useful to someone we figure releasing them (under a permissive license like the CCA) is a good thing.” 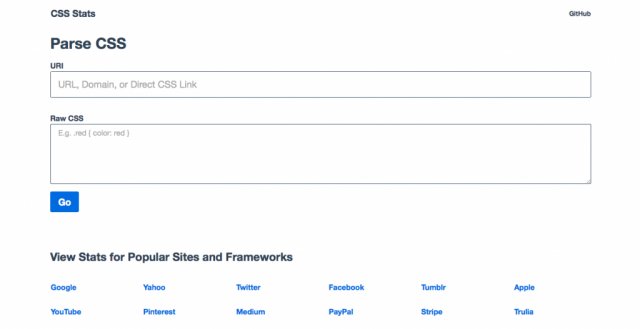 CSS Stats came in second on Sunday, with 171 upvotes as of Monday. The site enables users to visualize various statistics about the CSS of their sites or their favorite sites. The site generates a profile with statistics such as the number of rules, selectors, declarations, and properties; the number of unique colors used; how many background colors are used; the number of unique font sizes in use; which font families are in use; visualizations of specificity and ruleset size; and the number of media queries. 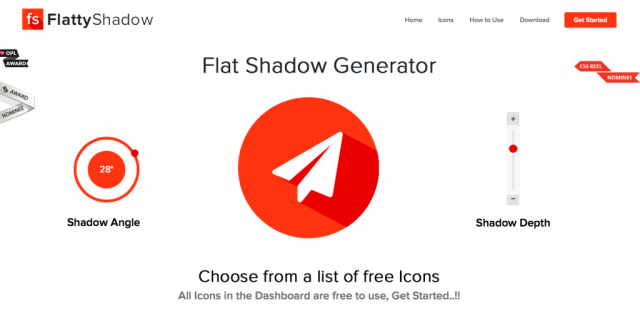 Flat Shadow Generator came in first on Saturday, with 289 upvotes as of Monday. The Flatty Shadow Flat Shadow Generator enables users to generate icon shadows “in no time,” using any of the thousands of free icons provided by the tool’s “one-stop icon warehouse.” Users can choose the shadow angle and shadow depth, and change the position of the icon, and just need to download and include Flatty Shadow JS and CSS files in their webpages. Additionally, they can download their high-resolution customized icons scaled for various screen resolutions, and contribute SVG, AI, EPS, or font icons to the project. 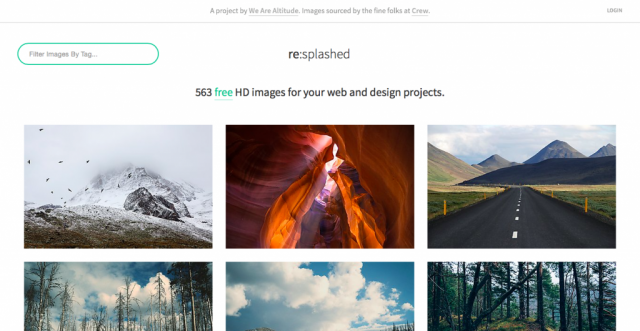 re:splashed came in second on Saturday, with 270 upvotes as of Monday. The site aggregates free HD images for users’ web and design projects, and enables them to search for images with tags (with increased filtering options to come). The images are in the public domain and have no copyright, so are able to be used for commercial purposes. Designer Tyler Wanlass says on Product Hunt that “for re:splashed I chose to focus on the user experience. I specifically built it because I was sick of scrolling though hundreds of photos to find the one I was after.” 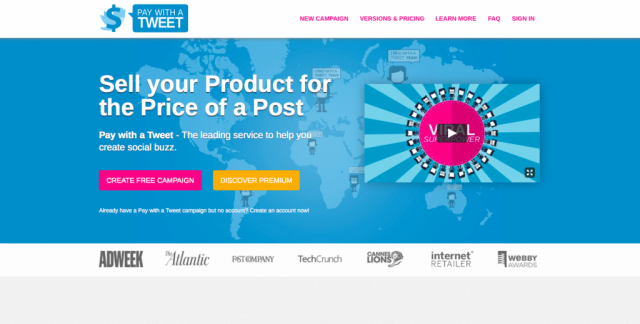 Pay with a Tweet came in first on Friday, with 244 upvotes as of Monday. Pay with a Tweet aims to be the first “social payment system,” and enables businesses to give users access to their content or product once they’ve tweeted or posted about it — “the easiest and fastest way to go viral.” Businesses can place audio, video, coupons, documents, or links behind the Pay with a Tweet “barrier,” and embed a button on their website to let their users choose a network to post and then get access to the content. Pay with a Tweet provides cost-efficient marketing, and users can create a free campaign or upgrade to Premium features to create up to 25 campaigns and receive custom capabilities and detailed statistics. 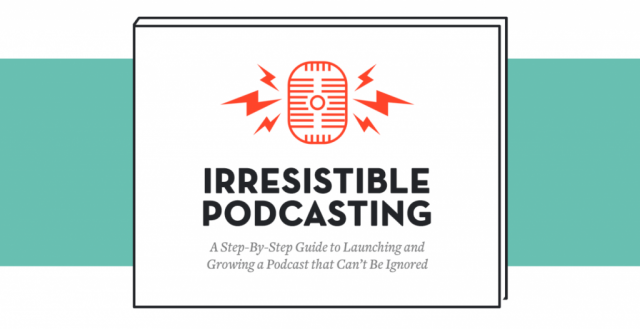 Irresistible Podcasting came in second on Friday, with 216 upvotes as of Monday. Irresistible Podcasting is an 11-week video course, taught by Adam Clark, on “launching and growing a podcast that can’t be ignored.” The course includes content strategy, interview techniques, information on which kinds of podcasts work and which don’t, audience-building and launch strategies, plus bonus material including case studies, free gear and software, one-on-one sessions, and a module on how to turn a podcast into a business. The course will launch in February, and the standard course package is available for pre-purchase. 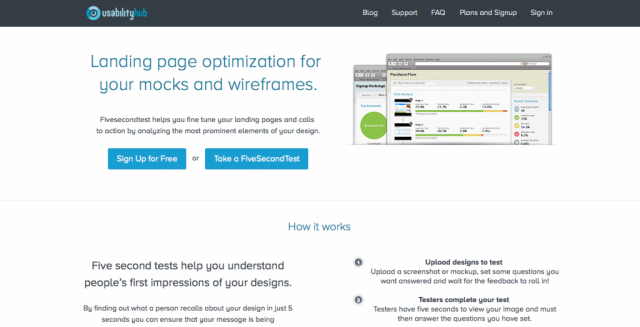 Five Second Test came in first on Thursday, with 215 upvotes as of Monday. Five Second Test enables developers to analyze the most prominent elements of their web designs in order to fine-tune their landing pages and calls to action. The site explains that five second tests enable users to understand people’s first impressions of their designs, and ensure that pages are conveying their messages as effectively as possible. Users can upload a screenshot or mockup and set questions for which they want answers. Then, testers have five seconds to view the image, and subsequently must answer the questions set. Five Second Test then collects the responses, extracts keywords, and presents the data. 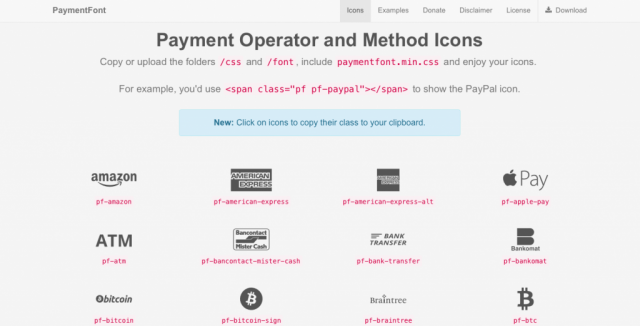 PaymentFont came in second on Thursday, with 244 upvotes as of Monday. PaymentFont is a webfont that contains 94 icons for all the major payment operators and methods. Users can implement the icons on their payment pages. Creator Alexander Pollmann notes on Product Hunt that he has also created a WordPress WooCommerce plugin that replaces the standard payment method images with PaymentFont icons.

The Interview came in first on Wednesday, with 485 upvotes as of Monday. The Sony Pictures film, an action-comedy starring Seth Rogen and James Franco as journalists recruited by the CIA to assassinate North Korean leader Kim Jong-un, played by Randall Park. The movie was released on YouTube Movies, Google Play, Xbox Video, and on a Sony-owned site powered by Kernel. The New York Times reports that in the first four days of its availability, The Interview generated roughly $15 million in online sales and rental fees (rentals cost $6 and sales cost $15). A limited theatrical run generated $2.9 million from Thursday to Sunday. On Sunday, Apple’s iTunes joined in offering The Interview online.

Gitr came in second on Wednesday, with 171 upvotes as of Monday. Gitr, which the Product Hunt community describes as “Tinder for developers,” provides developers with a way to meet other developers. As detailed in a post on Medium, Gitr was built and launched in just two days, and aims to be “a nifty little community app for GitHub.” The post explains that Gitr enables users to “sign up, see profiles and repos of other similar GitHub users and swipe left/right to signal their interest in that user’s work. If both folks are interested in each other’s work, we’ll set up a chat (yes, just like Tinder, but purely business here thanks!).” 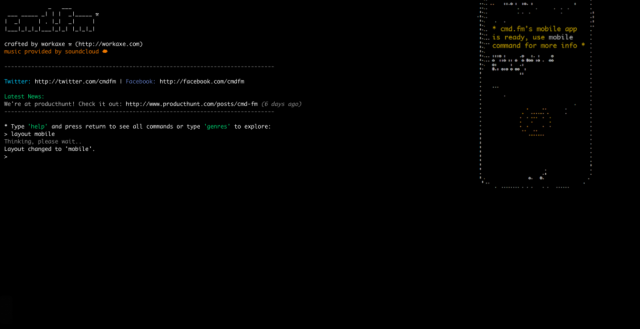 Cmd.fm came in first on Tuesday, with 387 upvotes as of Monday. The app provides “radio for geeks and hackers” with a command line interface. Cmd.fm is available as a web and iOS app, and features more than 120 genres of music, sourced mostly from SoundCloud, and using a combination of bots that track and filter independent artists’ work, and volunteer curators who process the filtered selections. The app provides unlimited skips, enables users to easily discover music, and lets them instantly share music. It is also ad-free and runs “blazing fast.” 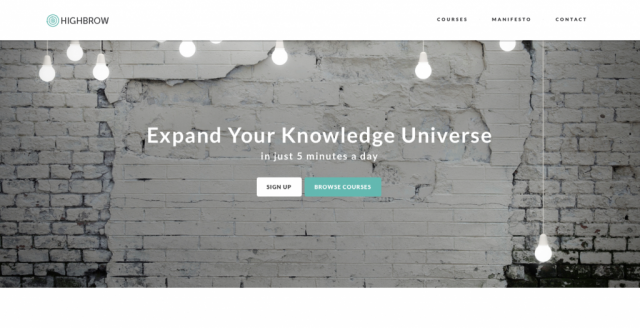 Highbrow came in second on Tuesday, with 333 upvotes as of Monday. Highbrow enables users to expand their “knowledge universe” in just five minutes each day. Highbrow sends “bite-sized email courses” in 10 parts to users’ inboxes, and they can choose among 40 courses in seven different categories. Popular courses include “Philosophical Ideas That Everyone Should Know,” “Most Famous Works of Art,” “Easy Tips to Eat Healthy,” and “The Most Influential Speeches in World’s History.” Highbrow’s “manifesto” notes that, “We are so busy, have less time, and simply don’t find the time to do the work to truly get smarter. Information is plentiful, yet attention and real knowledge is scarce.” Highbrow aims to demonstrate that “Investing just 5 minutes a day in focused exploration of interesting subjects can elevate the mind, broaden horizons, and build true knowledge.” 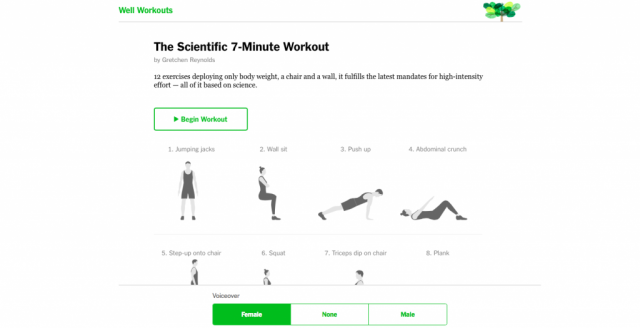 7-Minute Workout came in first on Monday, with 589 upvotes as of the following Monday. 7-Minute Workout is a workout app from The New York Times, and is comprised of 12 exercises that rely only on body weight, a chair, and a wall. As The New York Times notes, the workout “fulfills the latest mandates for high-intensity effort — all of it based on science.” The web app provides a standard 7-minute workout plus an an advanced workout, which has nine steps and requires a pair of dumbbells. 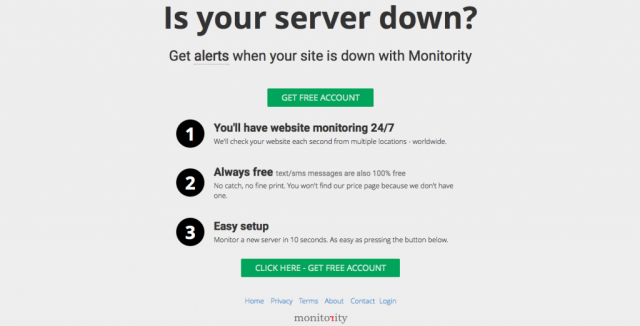 Monitority came in second on Monday, with 304 upvotes as of the following Monday. Monitority is a free and simple website monitoring tool, which sends users text messages, emails, or tweets when their site is down. Monitority checks a website from multiple locations around the world, and users can access the service via an iOS or Android app or via its web interface. Monitority supports the monitoring of domains, URLs, and IP addresses; enables an unlimited number of checks and unlimited data retention; tracks response time; and includes built-in “panic thresholds.” 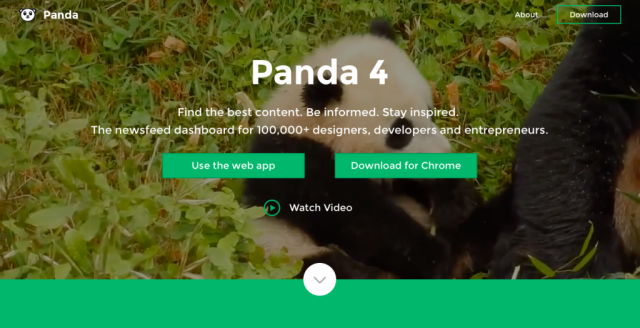 Panda 4 came in third on Tuesday, with 454 upvotes as of Monday. Panda is a “newsfeed dashboard” that provides users with daily news and inspiration — from sites including Hacker News, Dribbble, Designer News, The Verge, Behance, Product Hunt, Fast Company, and Wired — via a web app and Chrome extension. Users can bookmark articles and inspiration within Panda to build their own library of content, choose from among five different reading layouts, and view their favorite websites within Panda.