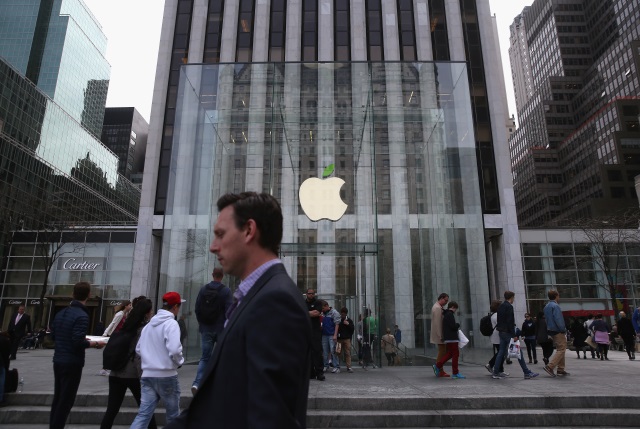 While there is always a fair amount of hype in the run-up to Apple’s media events, this year’s event is drawing an especially high level of interest from the press and tech fans alike due to the expected debut of multiple new products. Alongside two new iPhone models with rumored larger screen sizes of 4.7 inches and 5.5 inches, Apple is also expected to unveil its highly anticipated wrist-worn tech product that is widely referred to as the “iWatch.” Besides marking Apple’s first foray into the burgeoning wearables market, the launch of the so-called iWatch will also be the company’s first new product category since the launch of the iPad in 2010.

Naturally, Apple’s rivals are eager to steal the spotlight from the iPhone maker with their own lineups of new products. These rivals include Samsung, Apple’s biggest competitor in the smartphone market and its longtime foe in the courts. Apple has repeatedly accused Samsung of infringing on its patents and copying the overall look of its iPhone. Whatever your opinion is regarding the similarities between Samsung and Apple’s devices, there is no disputing the Korea-based company’s success in the worldwide smartphone market. According to data from market research firm IDC, Samsung was the leading smartphone vendor in the second quarter of 2014, with a 25.2 percent share of the worldwide market. Apple was the second-largest vendor, with an 11.9 percent share.

However, while Samsung may have copied aspects of Apple’s category-defining iPhone, the Korean company has also blazed its own trail by popularizing the phone-tablet hybrid category with its line of Galaxy Note phablets. With the expected upcoming debut of a 5.5-inch iPhone, Apple may soon be encroaching on what has traditionally been Samsung’s territory. 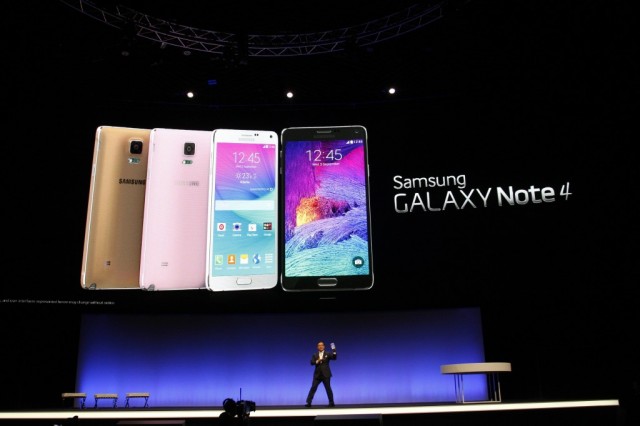 While the screen size threshold that is used to determine if a smartphone qualifies as a phablet is not set in stone, IDC defines phablets as “smartphones with screen sizes from 5.5 to less than 7 inches.” According to the IDC’s predictions, the phablet segment of the smartphone market will grow to 32.2 percent in 2018 from 14 percent this year. Along with the increasing competition from low-cost Chinese smartphone makers, Apple’s entry into the phablet market may be one of Samsung’s biggest concerns right now.

Besides threatening Samsung’s dominance of the phablet market, Apple is also set to take on its rival in the smartwatch sphere. Last year, Samsung unveiled the first of its Galaxy Gear smartwatches at the IFA (Internationale Funkausstellung Berlin) consumer electronics show in Berlin. While the original device was panned by many tech reviewers for its limited capabilities and clunky design, Samsung’s ongoing smartwatch releases demonstrate the company’s ongoing interest in creating a wearable that will click with consumers.

With Apple on the verge of entering the phablet and smartwatch markets, Samsung’s latest entries in both of those markets could prove to be especially crucial this year. At the ongoing IFA consumer electronics show in Berlin this year, Samsung put its cards on the table with its next-generation phablet, smartwatch, and more. While it remains to be seen if Samsung’s latest products will be enough to trump the devices that Apple still has hidden up its sleeve, here are several products that Samsung is hoping will give Apple a run for its money. 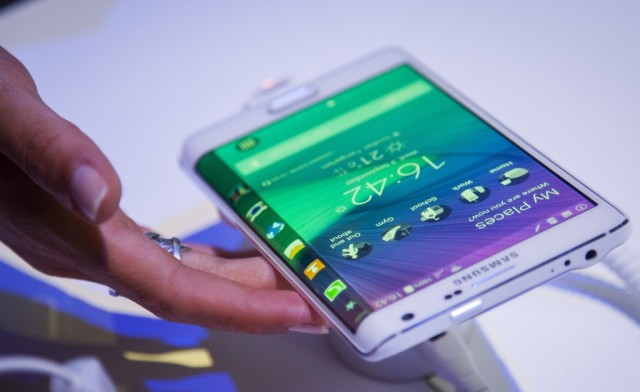 While similar to the standard Galaxy Note 4 in most aspects, the Galaxy Note Edge gets its “Edge” moniker from the screen that extends 160 pixels past the edge of the main 5.6-inch display. This “edge screen” can function as a space for quick links to various apps or as a dynamic ticker board of information. Beyond the obvious cool factor, the edge screen also has a practical purpose, since it allows users to see displayed information from the side when the device is laid flat on a table. This makes the Galaxy Note 4 the ideal smartphone to use as a bedside alarm clock. According to Samsung, both devices will be available later this year. 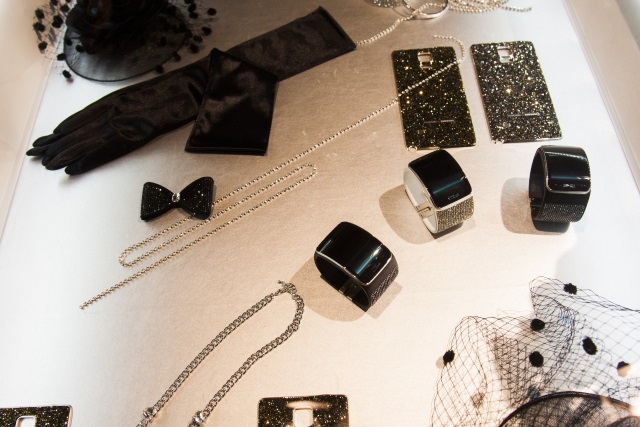 In Berlin, Samsung also unveiled its latest smartwatch iteration, the Gear S. The wrist-worn device features a 1.0 GHz dual-core processor and a curved 2-inch 360-by-480 resolution AMOLED (active-matrix organic light-emitting diode) screen that shows off Samsung’s flexible display technology. The Gear S includes 3G, Bluetooth, and Wi-Fi connectivity options, making it one of the few smartwatches on the market that doesn’t rely on a connection to a smartphone in order to make or receive phone calls. On the other hand, despite its inclusion of a QWERTY keyboard, it’s hard to imagine users composing text messages on this device. While it remains to be seen how the iWatch will operate, Apple’s device is rumored to be designed to be used in conjunction with an iPhone.

Like the rumored iWatch, the Gear S also includes multiple health-monitoring sensors, including an accelerometer, a gyroscope, a compass, a heart rate sensor, an ambient light sensor, a UV light sensor, and a barometer. Like all of Samsung’s latest smartwatches, the Gear S runs the company’s native Tizen operating system, rather than the wearable-optimized Android Wear OS. Alongside the Gear S, Samsung also unveiled the Gear Circle, a Bluetooth-connected pair of earphones that allows users to listen to music, receive calls, and make voice commands. Last but not least when it comes to wearables, Samsung claimed that the 300 maH battery will last two days without charging during “typical usage.”

While Samsung offers a variety of Gear S wrist straps in different colors, the company also announced a partnership with Swarovski for consumers who are interested in a crystal-encrusted version of a Gear S. While it’s not known if Apple will offer a similar luxury option for its iWatch, the device was rumored to be “positioned as a fashion accessory,” according to sources cited by 9to5Mac earlier this year. More recently, according to an insider source cited by The New York Times, Apple designer Jony Ive claimed that “Switzerland is in trouble” when the iWatch makes its debut, presumably because the iWatch’s luxurious design will put it in direct competition with the country’s respected horology industry. Both rumors suggest that Samsung’s Swarovski edition Gear S was a preemptive move against the possibility of a luxury iWatch. According to Samsung, the Gear S will be available beginning in October, which is either before or around the same time that Apple’s iWatch is rumored to be hitting store shelves. 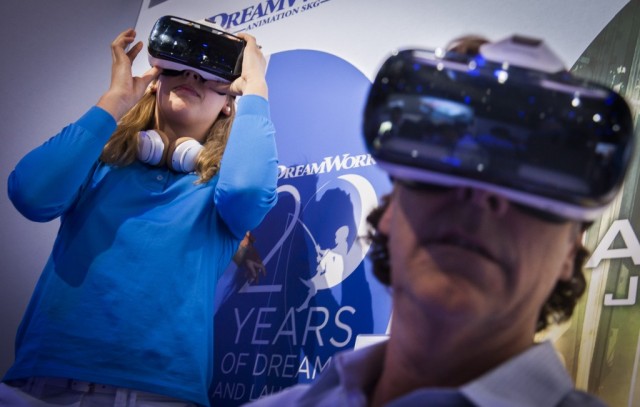 Of course, it’s hard to make a fair comparison without knowing exactly what Apple will reveal on September 9. However, based on the long history of fierce competition between these two companies, it’s fair to say that Samsung at the very least is hoping that its latest batch of devices will draw some attention away from its California-based rival’s upcoming media event. Apple’s mysterious media event is scheduled to begin at 1 p.m. Eastern at the Flint Center for the Performing Arts in Cupertino, California on Tuesday, September 9.