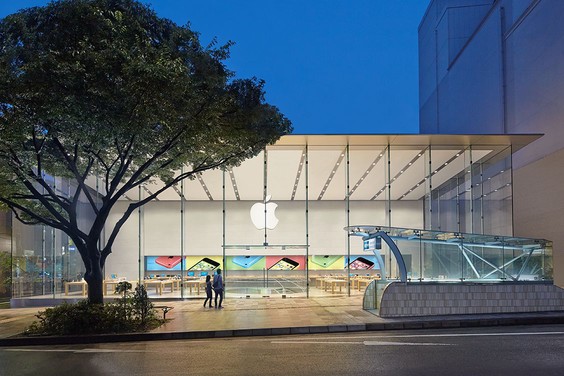 During her second month as Apple‘s (NASDAQ:AAPL) new senior vice president of retail and online stories, former Burberry chief executive Angela Ahrendts has sent her first memo to Apple’s retail employees. 9to5Mac obtained a copy of the memo, in which Ahrendts talks about her plans for the future of retail operations at Apple, pointing to three things that customers can expect to see from Apple in the next few years.

In her memo, Ahrendts wrote that Apple Retail’s “greatest opportunity” will be the further development of customers’ shopping experience, both online and in Apple stores.

“Looking forward to the future, I feel our greatest opportunity will be continuing to focus on and evolve the consumer journey online and in our stores. Although technology is rapidly changing how customers shop, they still want to feel surprised and delighted by the personalized Apple experience we provide at every turn.”

As 9to5Mac reported at the beginning of her tenure, Ahrendts is expected to revamp the experience of shopping in an Apple Store or on Apple’s website. She’s reportedly interested in closer connections between the experiences online and in-store, and has already begun to restructure the executive team at the top of Apple Retail to accomplish her goals. As MacRumors reported toward the end of May, Ahrendts made changes that saw Vice President of Retail Stores Steve Cano shifting to international sales, and both European retail head Wendy Beckman and head of China retail Denny Tuza gaining new responsibilities on the retail team.

Vice President of Apple Retail Real Estate Bob Bridger and Vice President of Sales Operations Jim Bean will continue to build new stores and run retail operations and finances, respectively. Former Delta (NYSE:DAL) executive Bob Kupbens was appointed as the new vice president of online retail earlier this year. All of those changes point to a strategic restructuring of the way that Apple Retail will operate both its physical stores and online retail.

Ahrendts notes in her memo that she has visited a number of Apple stores to see how they operate and to learn about the company’s culture. She mentions visits to stores in San Francisco and London, and on Friday she also appeared at the opening of a new store in Tokyo, which brings us to the next change that Apple customers should expect under Ahrendts’s leadership.

2. Renewed focus on retail in Asia

In her memo, Ahrendts wrote, “I’m looking forward to Tokyo and the Omotesando opening,” hinting at the emphasis that she’s expected to place on developing Apple’s presence in Asia. AppleInsider noted that Ahrendts and other Apple executives — including Bridger, Cano, Kupbens, and Jennifer Bailey — were in attendance at the Friday grand opening of the new Omotesando store in Tokyo. It’s worth noting that the opening was Ahrendts’s first public appearance as an Apple executive.

Her choice to work directly with Tuza, the head of China retail, signifies her seriousness about focusing on Apple’s retail in Asia. As 9to5Mac reports, Ahrendts is said to believe that the taste of Chinese consumers is critical to operations not only in Asia, but around the world. Apple reportedly plans to expand its operations to thirty stores in China and the surrounding region by 2016.

At the Tokyo store opening, Ahrendts posed for selfies with fans, and she seems to thrive in the busy environment of the Apple store. 9to5Mac points out that her comfort visiting stores contrasts with the behaviors of John Browett, her predecessor as retail head. Also in contrast to Browett’s leadership, Ahrendts treats Apple’s retail operations as a culture, rather than a business. She’s visited many of the stores surrounding Apple’s Cupertino headquarters, and has connected on a cultural level with everyone from store employees to executives.

3. A redesign of retail as an extension of Apple culture

In Ahrendts’s memo to retail employees, she thanked the employees that she’s communicated with, saying that they helped her to understand and appreciate Apple’s culture.

“Thank you so much for an amazing first month, all your emails, and your kind words of support. I sincerely appreciate the warm welcome and all of your insights and perspectives, which have helped me quickly understand and genuinely admire Apple’s unique culture.”

Ahrendts is expected to re-envision retail operations to be in line with that culture, and is said to be particularly interested in revamping Apple Stores’ over-the-phone service, Personal Setup, and even the iPhone trade-in program. Ahrendts is also looking at Apple Stores’ iBeacon location-tracking and interactions with mobile devices. She’s interested in improving mobile payments both for in-store purchases and online purchases completed through apps. And that’s where her vision to more closely connect the online and in-store Apple experience comes in: blurring the lines between them would improve consumers’ experience with Apple as a culture and as a business. Customers can expect a complete redesign of the retail experience, ranging from how they get information about products to how they interact with store employees to how they pay for products both in-store and elsewhere.

In just a month and a half with Apple, Ahrendts has succeeded in building a personal and cultural rapport with employees — a smart move as she reshapes a sector of Apple’s operations that relies heavily on people to create an experience for customers. In the next few years, she’s expected to overhaul Apple’s retail operations and experience, which she says will help Apple “enrich lives and communities.”