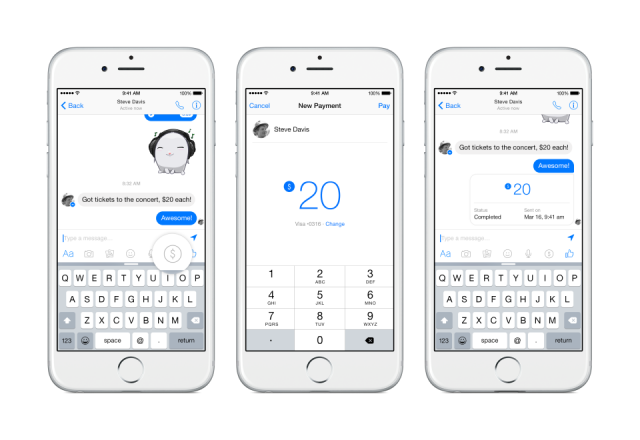 Users of Facebook’s Messenger app will soon gain the ability to send something more than texts, GIFs, and emoticons to their friends. Facebook announced that it’s adding a feature in its Messenger app to enable users to send money instantly to their friends. The feature — which Facebook, conspicuously early on in the Newsroom post, explains is “easy and free” — enables users to link their debit cards to the service to transfer money to one another as easily as they send texts and photos now. The feature will roll out “in the coming months” for Android, iOS, and desktop users in the United States.

The first time that you send or receive a payment with Messenger, you’ll need to add a Visa or MasterCard debit card issued by a U.S. bank. Once you add a card, you can create a PIN for additional security, and on iOS devices you can also enable TouchID. Additionally, you can turn on login approvals, a setting that will require you to enter a security code each time you access your Facebook account from a new computer or mobile phone.

To send money, you simply start a message to a friend, tap the $ icon and enter the amount you want to send, and tap “Pay” in the top right corner. From there, you can add your debit card to send money. To receive money, you just open the conversation from your friend, tap “Add Card” in the message, and add your debit card to accept money. It could take one to three days for the bank to make the money available, as it does with other deposits.

1. Will users trust Facebook enough to send money via Messenger?

An important consideration for users considering trying out Facebook’s new payments service will be the security of the system. Re/code reports that the money one user transfers to another via Messenger is held for “seconds” before it’s sent along to the other user’s bank. And if the recipient doesn’t yet have a card associated with his or her account, Facebook will hold the money until they’ve set one up. Facebook built the entire system in-house, which means that the debit card information that users share with it will be housed on Facebook servers.

The company has stored data like this for years, as its users can pay for games and gifts through its platform. The Newsroom announcement assures users that Facebook has been a “dependable and trusted payments processor for game players and advertisers since 2007.” Facebook also details its security practices, noting that it encrypts the connection between you and Facebook, as well as card information you want stored for you.

Its system uses “layers of software and hardware protection that meet the highest industry standards,” and Facebook’s payment systems are kept in a secured environment separate from other parts of the Facebook network. This environment receives additional monitoring and control, and a team of anti-fraud specialists monitors for suspicious purchase activity. Whether there will be any bugs with the security of the system remains to be seen, but getting security right from the beginning will likely be crucial if Facebook wants the feature to achieve wide adoption.

2. Will the service popularize peer-to-peer payments in the U.S.?

Writing for The New York Times, Vindu Goel points out that WeChat and other Asia-based communications services like Alipay already enable hundreds of millions of users to send money via instant message. But the idea of peer-to-peer mobile payments is just beginning to gain traction in the U.S., where email-based payment services like PayPal have long been more popular services.

However, the shift toward mobile-friendly systems makes more sense given the broader context of shifts in how users communicate with each other.  As messaging eclipses email as the preferred form of electronic communication, especially among younger users, Facebook has looked to dominate that platform. Facebook’s Messenger app is one of the largest messaging platforms in the world, with more than 500 million monthly users. And last year, Facebook acquired WhatsApp, a platform that has more than 700 million active users. The new feature sees Facebook leveraging the popularity of its platform to make an entrance into the arena of money transfer services that attempt to capture messaging enthusiasts.

Steve Davis, the product manager in charge of the project, told Goel that Facebook wanted to simplify the process of peer-to-peer payments as much as possible with the new feature. “We know that conversations about money are happening all the time,” he said. “But most conversations begin in one place and end in another place.” To streamline the process for users, Facebook wanted to keep the payment and conversation in a single message thread, which will also serve as a record if users need to reference it later.

3. How will the feature affect payments competitors?

Goel notes that the introduction of a Facebook payments feature has been “highly anticipated by Wall Street” since June of 2014, when Facebook hired PayPal president David Marcus to lead its messaging efforts. Facebook’s service is expected to shake up the emerging market of services for instantly sending money between individuals, called peer-to-peer payments.

Venmo, a mobile payments app that’s owned by eBay’s PayPal, is one of a handful of peer-to-peer money transfer services against which Facebook’s feature will compete in the U.S. It’s more than just a payments app, and functions as a social network in the sense that it allows users to post public or private messages about what the money they’re transferring is for. Ecommerce startup Square offers an app that enables users to send payments to individuals by email. And ephemeral messaging app Snapchat enables users to send money to one another through a service, Snapcash, created in partnership with Square. Facebook’s Davis pointed out to Goel that, unlike with PayPal or Venmo, “you don’t have to remember to withdraw the funds later.”

Initially, Messenger’s payments service will be limited to sending money between people who are Facebook friends, so it won’t immediately compete with Apple Pay or the mobile payment services that enable users to make purchases with their phones. VentureBeat’s Dylan Tweney points out that being able to send payments to strangers would enable users to purchase services and goods through Messenger — not just from advertisers, but from sellers of just about anything.

4. Will it pave the way for other Facebook services?

Goel reports that analysts think that if the feature in Messenger succeeds, Facebook will extend it to other types of purchases, perhaps enabling users to buy products directly from advertisers. Robert Peck, an Internet analyst with SunTrust Robinson Humphrey, said that “Facebook could use this as a back door to get people’s debit cards to enable the buy button.”

Facebook says that some merchants, particularly overseas, have been informally using Messenger to make transactions. The company has a payments business that brought in almost $1 billion last year, primarily for items purchased within games hosted on Facebook. The company has also experimented with an e-commerce system that enables merchants to list items for sale and collect money for purchases on the social network.

Re/code notes that Messenger payments could serve as a good way to get more debit cards on file in case Facebook does expand further into commerce. The company is already partnering with Stripe to power the Buy button, in a test that’s likely to expand. The Buy button will enable users to purchase goods that are featured in ads or posts on the social network.