[Update 6/1/15: It turns out that this is actual a sequel in the XCOM series, according to IGN. Sorry, BioShock fans.]

Something curious has floated up from the depths of the World Wide Web, and this is far from the first time it has happened. 2K Games has cryptically tweeted about something called hashtag #ADVENT, without giving almost anything in the way of details of what it’s all about. Despite the lack of hard information, there are plenty of hints that suggest this #ADVENT is almost definitely the beginnings of BioShock 4. Here we’ll look at the clues.

In its first tweet, 2K Games gave a link to the website adventfuture.org. That site doesn’t actually say anything to the effect of there being a new BioShock game in development, but that doesn’t mean there isn’t. In fact, this strategy has been used as a precursor to new game announcements in the past. To top that off, this strategy was used for BioShock Infinite – the website for that game was whatisicarus.com. This might not guarantee a sequel, but it’s just the first hint of many.

If you take the time to follow the link to adventfuture.org, you’re greeted with what amounts to an advertisement for a fancy new city of the future, named Advent. Based on 2K’s tweet, it’s a place that stands in opposition to “Luxury for the privileged few…” and thus suggests it will be a utopia for the common man. Looking back, BioShock and BioShock 2’s utopia, Rapture, was meant to be for societies elite to live away from government control, and BioShock Infinite’s Columbia was meant to be a racially exclusive utopia in the sky. The series has the tendency of introducing a new sort of utopia gone awry. So Advent wouldn’t be surprising setting for a new BioShock game. And it’s definitely a dystopia if the strange glitches on the website are to be believed. 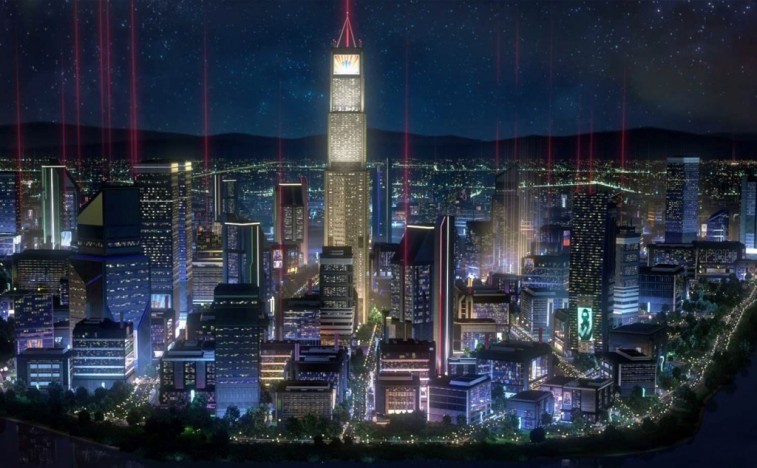 While there might be very little go on, since we’re not seeing any in-game footage yet, the above image that appears both on the adventfuture site and 2K’s tweet does show off a very distinct visual style. A sort of neon future cityscape. Again, looking at the previous games in the serious, a strong visual style is a hallmark in BioShock. The first game had the dark, spooky, subterranean Rapture. BioShock Infinite had it’s bright, shimmering Columbia. A futuristic neon city would both distinguish a new BioShock from the series’ other titles and offer the type strong style we’d expect.

Something big, menacing, and ubiquitous

BioShock had Big Daddies lurking around all of Rapture. Sometimes they wouldn’t mess with you, and other times they’d have you running in fear, because they were some mean dudes. BioShock Infinite had the Songbird flying through the skies of Columbia and soaring in to terrify you whenever the game demanded it. Not to mention the Mechanized Patriots — who isn’t afraid of a 10-foot-tall, minigun-wielding, flag-toting George Washington? As for Advent, the adventfuture site mentions that the city is “policed 24 hours a day by ADVENT forces.” Because it’s a technologically advanced city, those “forces” will probably be intimidating, large robots. The concept art here shows a city scene complete with several large robots standing idly on the sidewalks. Once again, this is totally in keeping with the series. (You can get a glimpse of the creepy baddie in the GIF below.)

It almost certainly wouldn’t be a BioShock game if there wasn’t some sort of modification going on to make humans something greater (or, in all likelihood, worse). BioShock had ADAM and Plasmids. BioShock Infinite had Vigor and salts. And Advent has gene therapy. This will surely be the source of the protagonists unique powers that make the BioShock series such a fun twist on typical first-person shooters, aside from the excellent stories and amazing visuals.

While we can’t say with 100% certainty that this is shaping up to be BioShock 4, it’s looking incredibly likely — and it’ll be great to finally get BioShock on PS4 and Xbox One. It has all the ingredients, even if it may not have the creators and staff that made the earlier games, as a large group of them has abandoned Irrational Games and begun working on another dark, spooky-looking game called Perception.