6 of the Best Pranks Pulled on iPhone Users

While fans of Google’s Android and Apple’s iOS will argue endlessly about which mobile operating system is the best, there is no debate about which company inspires the most rumors and speculation about its products and services. Apple’s penchant for extreme secrecy, combined with its reputation for unveiling new products with amazing features, has created the perfect environment for cultivating wild rumors. Add a fiercely loyal fan base that is always on the lookout for new information, and you have the perfect recipe for a prank. Here are six of the most memorable hoaxes that Apple users have been subjected to over the past several years.

Apps can enable amazing features on your smartphone — from turning a camera flash into a flashlight to using an accelerometer to measure your steps, apps are what empower a smartphone’s hardware. That being said, apps are not magic and cannot create new capabilities out of thin air. San Diego’s Fox News anchor Raoul Martinez demonstrated this truth when he pranked his co-anchor on live television with an app that promised to allow users to taste and smell things on the screens of their iOS-based devices.

2. Jimmy Kimmel convinces people that the iPhone 4S is the new iPhone 5

Talk show host Jimmy Kimmel may be the master of pranking gullible people into thinking that they are getting a rare early look at one of Apple’s latest products. In 2013, he managed to fool people on the streets of Los Angeles that the iPad mini was Apple’s newest iPhone. Earlier in 2014, he convinced some people that a $20 Casio watch with an Apple sticker on it was the Cupertino, California-based company’s rumored smartwatch. As seen in the video above, Kimmel kicked off his string of Apple-related hoaxes in 2012, when he fooled multiple people into thinking that the iPhone 4S was the as-yet-unreleased iPhone 5. 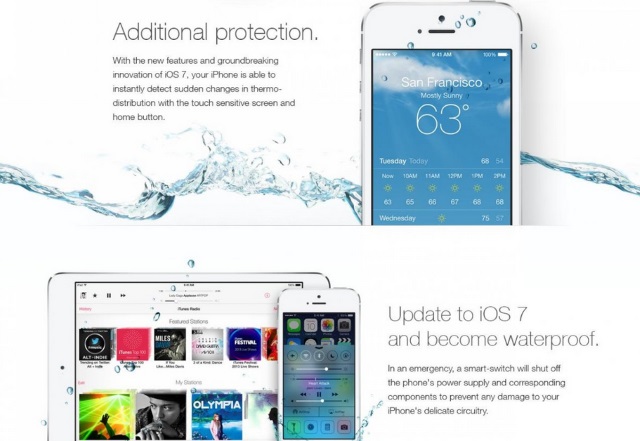 Soon after Apple’s iOS 7 mobile operating system was released in 2013, an official-looking advertisement surfaced on various social media websites that claimed the iOS 7 update made Apple devices waterproof. As noted by Sky News, the prank is believed to have originated from 4chan, an Internet forum that gained notoriety in 2014 for being the website where stolen celebrity photos were first posted. Unfortunately, based on some angry comments seen on social media websites, it appears that some Apple users may have actually tested this claim on their own devices. 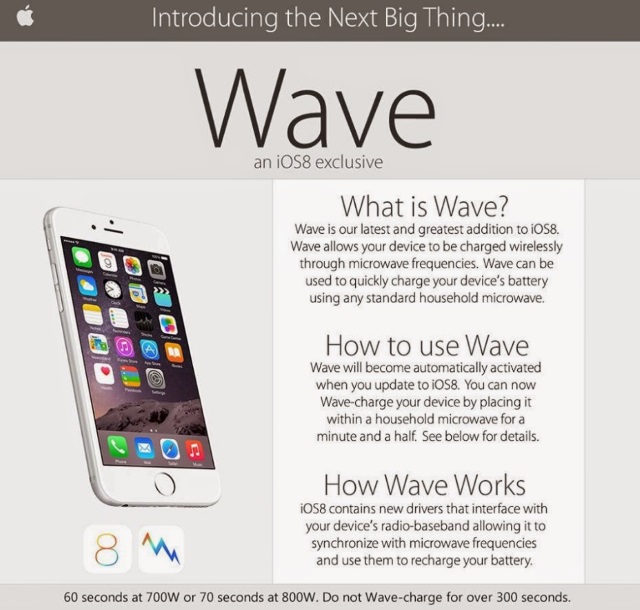 Like 2013’s waterproofing hoax, another fake Apple advertisement emerged on social media soon after the release of iOS 8. This time, instead of trying to convince Apple users that they can submerge their devices underwater, the fake iOS 8 ad described a new method for charging an iPhone called “Wave.” Essentially, this hoax tries to trick iPhone owners into microwaving their devices for a minute and a half. Needless to say, this does not work, as one unfortunate Twitter use confirmed. This hoax was also rumored to have first surfaced on 4chan.

Although this is more of a spoof of Apple’s 2014 “Bendgate” troubles than it is a hoax, considering the ludicrousness of some of the other hoaxes, it would not be surprising if this well-made commercial convinced some people that the malleability of the iPhone 6 Plus is not a defect, but an intended feature of the new phone.

6. A “Blast from the Past” that can brick your iPhone

Thanks to a bug in Apple’s mobile operating system, setting your iPhone’s date to January 1, 1970 renders it useless. Once news of the bug (and warnings not to try it at home) made their rounds online, users at 4chan created a graphic to trick unsuspecting iPhone owners into bricking their phones. The fake Apple screenshot claimed that by setting your iPhone’s date back 46 years, you could “warp back in time with a classic Macintosh theme.” The image made its rounds on Reddit and Facebook, where users quickly found out that changing the date resulted in an iPhone that refused to boot up, thanks to what Business Insider notes is a well-documented issue with Unix-based operating systems.