We’ve all done it: Poured hours of our lives into a game, sometimes even hundreds of hours. All that precious free time dedicated to exploring and conquering a digital world. At long last, we defeat the final boss and settle back into the couch to see how the story concludes. But what happens onscreen is not the “everyone lives happily ever after” ending we had hoped to find. What happens is much, much worse.

This could mean that the game’s ending spells bad news for the main characters or someone they love. This could mean that the end fails to satisfy in some fundamental way or punishes the player for some reason. Here are games with bad endings no one saw coming. Before you continue, however, be aware that massive spoilers lie ahead.

In all likelihood, no one goes into a psychological horror game like The Suffering with the expectation that everything will always turn out swell in the end. But the bad ending in The Suffering is such an awful, twisted horrific conclusion that you can’t help but be taken by surprise.

You play as an inmate at an asylum built on an island. They tell you you’re there for killing your family, but you have no memory of having done so. You escape, of course, and monsters start cropping up everywhere for you to kill. Throughout the game you make various morality decisions that determine the ending you’ll get. If you choose the high road, the game ends with you realizing someone else is responsible for killing your family.

If you play as a bad guy, however, it turns out that you did, in fact, kill your wife and children. You’re shown a first-person view of the horrors you inflicted on them, pummeling, drowning, or throwing them out a second-story window while they beg for mercy. It’s just plain awful stuff, so you probably shouldn’t watch the video of it above.

When it came out in 2008, Resistance 2 was one of the best shooters available on PlayStation 3. It still holds up all these years later. But one area where it doesn’t quite satisfy is the ending. The all-too-abrupt bummer of an ending.

As in the first game, you play as Nathan Hale. This installment sees you leading a team of soldiers who have been exposed to an alien virus that makes them extra powerful. (What could possibly go wrong, right?) At the end of the game, with your squad all but demolished, you might expect to find a cure for the virus and live to fight another day.

Nope. Instead, in a quick cut scene, your character succumbs to the virus, and your squad mate unceremoniously shoots you in the head. That’s all she wrote, at least until Resistance 3.

In this game you play as a vault hunter who scavenges the dangerous nooks and crannies of an alien planet to find a rumored vault filled with riches beyond your wildest dreams. So far, so good.

But when you reach the vault at the end, you open it up to find what? Incredible wealth and super-powered loot? Not a chance. Instead, you find a giant murderous insect monster. There is no treasure. There never was. Have fun fighting the boss and watching the credits roll, sucker.

Wouldn’t it be wonderful if the reward you received for beating all games was commensurate with the effort you put into them? Perhaps the most egregious ending on this list belongs to Ghosts ’n Goblins, one of the most maddeningly difficult games ever made. Seriously, I dare you to get to Level 2.

If you’ve logged the hours, suffered the frustration, and managed to beat the game, however, you’re greeted with a false ending that reads, “This room is an illusion and is a trap devisut [sic] by Satan.” You’re then kicked back to the very start of the game. Talk about a slap in the face.

If you somehow have the wherewithal to continue and you beat the game again, you finally get to kiss the princess, while this text appears above you: 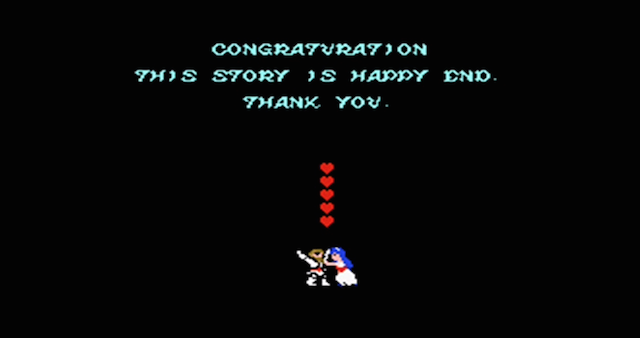 There aren’t enough [sic]s in the world.

To see the true ending of this fascinating action RPG, you have to play through the game not once, not twice, but three times. The plot is way too complicated to dive into here, but let’s just say that the third play-through ends with your friend in agony and on the verge of death. She asks you to kill her.

You’re faced with a choice. You can kill her with your sword, or you can “trade your existence for hers.” If you screw up your courage and choose the latter option, your character is erased from the game world, as if you had never existed. That would be a bad enough ending on its own, but to make matters worse, the game deletes all of your save files so you (the player) can never go back in as that version of the main character.

Sure, it’s a clever idea and it makes thematic sense, but erasing dozens of hours’ worth of data seems a little harsh, doesn’t it?