While many teens use their smartphones to send each other messages, post selfie after selfie to their social media profiles, and play an endless array of addictive games, others are looking with a more insightful and inventive eye at the technology around them. By imagining new applications for technology like 3-D printing and thinking of new ways to approach existing problems, many teens have created gadgets that make the world a safer, healthier place. From truly impressive science fair projects to gadgets that you can buy (or 3-D print yourself), check out six of our favorite gadgets invented by teens. 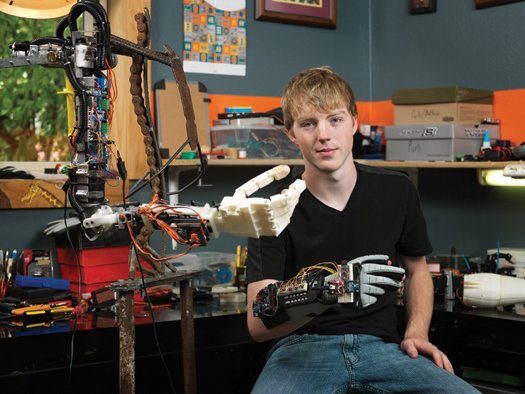 The Anthromod 3-D Printed Hand was developed by Chris Chappell and Easton LaChappelle. In 2012, they ran a Kickstarter campaign to fund the development of a low-cost, 3-D printed robotic hand with five actuated degrees of freedom and one manual degree of freedom in the thumb. According to the Kickstarter page, the project began when LaChappelle was 14 and had an idea for a robotic hand controlled wirelessly by a glove.

The idea evolved into a 3-D model of a functioning robotic hand, which he showed at a state science fair, where he met a a girl with an $80,000 prosthetic arm. The encounter inspired him to adapt the arm as a prosthesis, developing a control system and redesigning the hand. LaChappelle has continued to improve on the design; 3DPrint.com reported in January that LaChapelle, now 19 years old, implemented custom PCB boards, a custom servo shield, XBee modules for wireless communication, and a wireless, EEG-capable headset that senses 10 different channels of brainwaves to control the 3-D printed arm.

It’s more functional than a traditional prosthesis and stronger than a human hand, and LaChapelle launched a successful GoFundMe campaign to acquire more 3-D printers, as well as fund material development, manpower, and testing equipment.

The Exoskeleton Glove was developed by Charalampos Ioannou, who was a finalist in the 2013 Google Science Fair’s Age 17-18 category. The glove was designed to assist and enhance the movement of the hand in people who have upper hand disabilities that cause weak movement of the palm and fingers. These people can either move their hands only slightly, or lack the stability to manipulate everyday objects.

Ioannou’s project page explained, “The main idea of the project is that a metallic exoskeleton will be worn by the user as a glove and having placed in the right spots pressure sensors, it will be able to detect the kinetic stimulus of the user which then will be amplified with the use of servo motors.” The Exoskeleton Glove pairs the pressure sensors with a processing system, which runs an algorithm that drives precision motor mechanisms to enhance and support the force of the user’s hand. 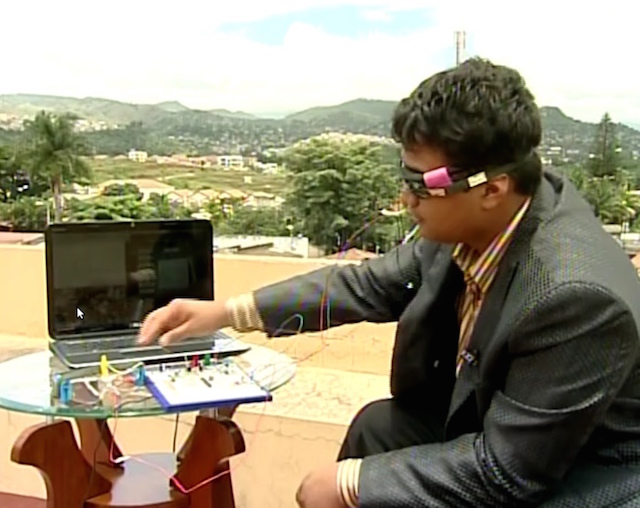 Eyeboard is an open-source eye tracking project that enables users to write on the computer and interact with the real world. The project was created by Luis Cruz when he was still in high school. TechCrunch reported in 2011 that because many eye-tracking solutions use cameras to monitor the movement of a user’s eyes, the hardware can make them cost-prohibitive for those who could use them the most.

But Cruz’s Eyeboard takes a different approach — its users wear a pair of glasses with a set of electrodes mounted inside, and an external board measures changes in the resting potential of the retina, which corresponds to movement. The simplicity of the design makes the Eyeboard far less expensive than traditional alternatives.

Cruz noted on the page of the unfortunate Kickstarter campaign for the project that “People with physical disabilities face a lot of communication problems with other people. This is why I was motivated to build an inexpensive, yet reliable, human-computer interface that detected eye movements using the technique used in the biomedical field, Electrooculography (EOG).” Cruz provides the documentation for users to build the device on the MAKE Magazine website and sells an Eyeboard kit on his company’s website.

The SMARTwheel, which claims to be the first intelligent steering wheel cover and prevents distracted driving, was created by a team of teens: TJ Evarts, Jaiden Evarts, and Bryeton Evarts.  The device snaps onto any steering wheel and is installed without plugs, cords, or wires. Users can “drive smarter” with real-time feedback offered by patented sensing technology that uses lights and tones to alert drivers when they’re exhibiting common distracted driving behaviors.

Users can track their improvement with a companion smartphone app, which enables the SMARTwheel to deliver trip data to the phone via Bluetooth, and shows users how their driving habits are improving with a simple grading system. The SMARTwheel incorporates linear potentiometers and an algorithm to determine hand position. The company’s website reads, “We’re working towards a day when drivers will be able to control their cars, phones, and other electronic devices with simple swipes and taps — without ever taking their hands off their SMARTwheel, or their eyes off the road.”

Steth IO is a device that turns a smartphone into a stethoscope, created by a high school student named Suman Mulumudi. As MakerBot reported last year, Mulumudi used a MakerBot Replicator 2 3-D printer to design an iPhone case that incorporates a diaphragm, which collects low-frequency sounds and sends them to the microphone, effectively turning the phone into a stethoscope.

“People have tried to put the microphone over the chest, but that doesn’t work,” said Mulumudi, who was 15 at the time. The companion smartphone app offers visualization, ambient noise reduction, and amplification of heart sounds. Users can monitor their heart conditions at home with Steth IO, and they can send recordings directly to their physician for review. The device is available for pre-order, and the company is seeking FDA approval before it ships.

Talk is a project by Arsh Shah Dilbagi, who was a finalist in Google’s 2014 Science Fair. Talk is an AAC — augmentative and alternative communication — device for people with developmental disabilities and speech impairments. Dilbagi wrote on the page for his entry to the science fair: “Current AAC Devices cost thousands of dollars and are slow, bulky and not generic. I decided to find a better solution — An AAC device which is affordable, faster, portable and generic.”

Talk converts a person’s exhales, and their variance in time and intensity, into electrical signals using an MEMS microphone. The signals are processed by a microprocessor, and short exhales are labelled as “dots” while longer exhales are labelled as “dashes.” They are interpreted as Morse Code, converted into words and sentences, and sent to another microprocessor for synthesizing. An Indiegogo campaign for the project claimed that the device increases users’ speaking rate by at least 300%.