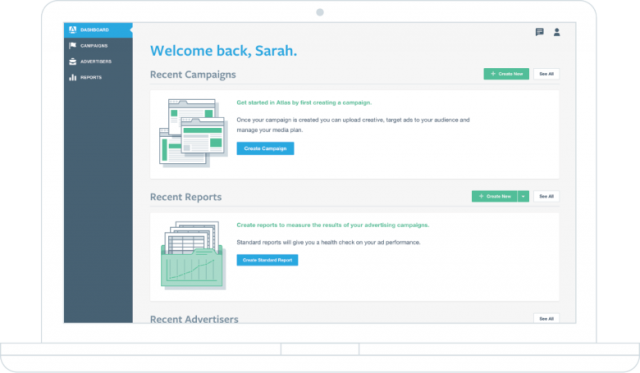 After years of speculation and predictions by analysts and investors, Facebook unveiled its Audience ad network in April, enabling marketers to “extend their campaigns beyond Facebook and into other mobile apps.” Now, Facebook is launching a rebuilt version of Atlas, an advertising tech platform that it bought from Microsoft last year, which could change the landscape of digital advertising. In a blog post published Monday, Erik Johnson, the head of Atlas, wrote that, “Atlas rebuilt [will] tackle today’s marketing challenges, like reaching people across devices and bridging the gap between online impressions and offline purchases.”

Here are six things to know about the new version of Atlas, and what the relaunch means for you and your data, plus Facebook competitors like Google.

Atlas isn’t Facebook’s long-rumored ad network, as Advertising Age notes. Technically — and here’s the disclaimer behind the headline — Atlas isn’t an ad network at all; it’s an ad-serving and measurement platform. However, like an ad network would, Atlas lets marketers buy ads via Facebook, to be placed on websites and apps that Facebook doesn’t own.

Facebook has built an automated ad-buying tool — called a demand-side platform — that would enable advertisers to buy ads outside of Facebook via real-time auctions. But that product is still in its “very early” stages, and it’s unclear when or even if Facebook will launch that ad-buying tool for commercial use, though The Wall Street Journal learned Facebook wants advertisers to use and become accustomed to Atlas’s “people-based” ad technology in order to better understand the effectiveness of the campaigns.

As for what Atlas is, Ad Age aptly calls the platform “a sort of Rosetta Stone” to bridge the gap between desktop and mobile, and to give marketers a new kind of assurance that their ads are being shown to their intended audience. The platform aims to change the way marketers measure and target their campaigns.

Facebook has built the second largest digital advertising platform — second only to Google — by collecting and analyzing detailed information about each of its 1.3 billion users, and selling ads that are individually targeted to each of those users. With the relaunch of Atlas, Facebook will roll those targeted ads out to thousands of other websites and apps other than its own, where the cross-platform targeted ads will reach users across devices, platforms, and publishers. Tying data like users’ activity on the web and on mobile to their Facebook profiles will let Atlas follow them around the web and the apps that they use on a daily basis.

As David Jakubowski, Facebook’s head of advertising technology, told The New York Times, “We are bringing all of the people-based marketing functions that marketers are used to doing on Facebook and allowing them to do that across the web.” Atlas will enable advertisers to target ads to specific demographics, showing ads across websites and apps, and the platform will also offer tools to help advertisers determine which ads were effective. Jakubowski explained to Ad Age how Atlas works, using The New York Times as a hypothetical example of a client that Omnicom, the first agency holding company to sign on with Atlas, could run a campaign for:

“The New York Times has an ad. It decides the ad is going to go to Pepsi because Omnicom has negotiated that buy with The New York Times for Pepsi for all the strategic reasons that Pepsi cares about. [Omnicom] calls Atlas to send over that creative. Atlas looks at that user and says, ‘Hey, do I know anything about this? Is it a person?’ And it uses that Facebook map because Facebook knows who you are and says ‘Yes, it is’ or ‘No, it isn’t’ or ‘Don’t know.’ Those are the three options. In the event it says yes, it says ‘Is there any optimization to be done with this Pepsi ad? Is there a blue Pepsi ad for boys and a pink Pepsi ad for girls? Are there any differences between the age buckets?’ That’s how it uses the actual people identity.”

3. Atlas will be able to track users across platforms and devices

Atlas makes tracking mobile activity considerably easier, and makes advertising more effective for marketers. On a smartphone or a tablet, traditional web-tracking tools largely do not work. As Johnson notes in the Atlas blog post, “Cookies don’t work on mobile, are becoming less accurate in demographic targeting and can’t easily or accurately measure the customer purchase funnel across browsers and devices or into the offline world.” Atlas will use its “entirely new code base” to track individuals across devices, enabling marketers to find out when a purchase made on a computer originated with an ad shown on mobile.

With Atlas’s “people-based marketing,” advertisers can see how many ads were served, and what percentage of those impressions were tied to specific demographic groups. Since Atlas links impressions to actual Facebook users, the data is based on real people, and that represents a huge step forward for a digital advertising industry that relies much more on approximations than definitive data.

4. The privacy-minded will worry — but Atlas’s data use is nothing new

Facebook notes that users will stay anonymous to advertisers — who will just know some basic facts about them — but those concerned with privacy have long balked at Facebook’s propensity for collecting user data for advertising purposes. The revamp of Atlas will be no exception, but as Re/Code’s Peter Kafka writes, anyone who is worried about Atlas using their Facebook data to serve ads should reconsider having a Facebook account (or eschew web browsing altogether, Kafka notes).

As The New York Times reports, if a user is logged in to the Facebook app on a smartphone, the company can track what other apps he or she is using, and could potentially show adds within those apps. (See item number 6 for more information there.) But The Times also notes that any matching of Facebook’s users with — for example — Pepsi’s database of its fans is done on a “blind” basis, and Facebook is adamant that it doesn’t ever disclose the identity of its users to advertisers. Advertisers that — while it will likely have information on your age, gender, and location — won’t know your actual identity. It’s worth noting that users can also specify what information they share with advertisers and other apps via Facebook.

5. Atlas will help Facebook compete with other companies (which collect data to sell in advertising)

Facebook isn’t the only one to build an advertising business on the collection and analysis of users’ data. From Google to Yahoo to a variety of other smaller players, a variety of companies can use your web browsing and other mobile and online activity to target advertising to you. A newly revitalized Atlas will figure in to Facebook’s strategy to compete against Google for advertising dominance. Google scans sources like email and web searches to help marketers target ads across the web and on mobile devices.

But the data that Facebook collects — and organizes into an advertising profile for every user — is a combination of his or her real identity, personal information that’s voluntarily disclosed, and mobile and web activity might make its ads particularly successful, and therefore valuable, to marketers. Facebook is specifically targeting Google’s DoubleClick display ad business, and Re/Code notes that Facebook and Google are already neck-and-neck in the display ads business. But while display ads are a core part of Facebook’s advertising business, Google’s still centered around search ads.

6. Atlas is part of Facebook’s “battle for your identity”

As Quartz’s Leo Mirani recently reported, millions of Internet users voluntarily give Facebook, Google, and others access to their activity on the web and on mobile by using “social logins,” which let users sign in to an array of websites and services using their Google or Facebook credentials. In return for giving you quick (and easy-to-remember) access to the sites and services you use across the web, Google and Facebook get to track your activity. As smartphones and tablets outdate cookies and traditional tracking mechanisms, the user’s identity is the most important tool that advertising firms can use to track users across platforms and devices.

To circle back to Atlas, the platform is reemerging in a landscape where many Internet users acknowledge that they pay a price to use the services that they enjoy: the price of the personal data they share with Facebook, Google, and countless other smaller players. Atlas will just leverage that data to provide marketers with the tools to serve better ads — so that even though you know you’re handing over your personal data, you can be confident that you’ll see fewer irrelevant or repetitive ads.