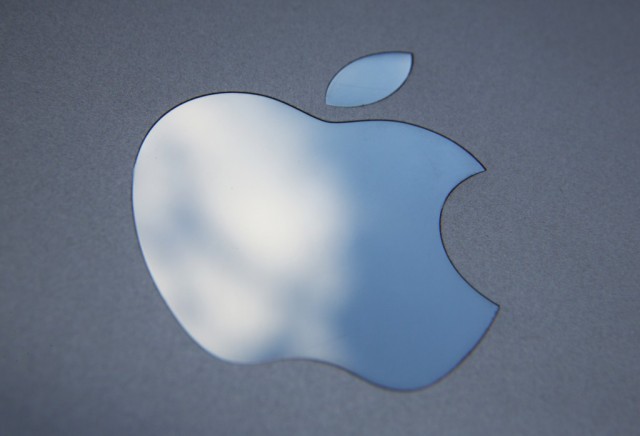 With another week finished, another week’s worth of Apple rumors have turned up. Of course, the biggest Apple news from last week was not a rumor, but the confirmation of a rumor. Apple sent out e-vites to multiple media outlets last week that confirmed that it would be holding a media event on Tuesday, September 9, as was previously reported by Re/Code in early August. However, in typical Apple fashion, the invitation offered no details on what would be unveiled at the event, which left the rumor mill running at full speed to fill in the information gap. While many of last week’s rumors were predictably focused on the two upcoming iPhone models, there were also several rumors about products that aren’t expected to be released until next year. Here are the latest Apple product rumors from last week.

The source: Early last week, a leaked iPhone 6 schematic obtained by Chinese repair company GeekBar and highlighted by GforGames, appeared to show a new coprocessor codenamed “Phosphorus.” Since the iPhone 6 models are expected to work closely with Apple’s HealthKit data storage platform and related Health app, GforGames speculated that the chip would be used to process new types of health-related data. However, according to a knowledgeable forum poster cited by MacRumors, the chip highlighted in the schematic is actually a barometric pressure sensor made by Bosch, instead of a replacement for the M7 motion coprocessor.

The background: Since so many Apple rumors are based on partial information or outright speculation, it should come as no surprise that false conclusions are sometimes drawn. While the highlighted chip may not be a next-generation M7 coprocessor, it will give Apple’s iPhone 6 models new capabilities for detecting environmental conditions. It should also be noted that the misidentified chip does not necessarily rule out the possibility that Apple has implemented a new “M8” coprocessor in the iPhone 6.

The source: Early last week, Bloomberg cited insider sources that said Apple was planning on starting production on a 12.9-inch iPad in the first quarter of next year. According to the sources, Apple has been working with its suppliers for over a year on “a new range of larger touch-screen devices.”

The background: Rumors of a 12.9-inch iPad, or “iPad Pro,” have been around since at least last year, when the Taiwan-based DigiTimes reported that Apple was working on a larger tablet aimed at North America’s educational market. According to DigiTimes, the device was supposedly arriving in October of 2014. However, subsequent reports from DigiTimes and well-connected KGI Securities analyst Ming-Chi Kuo, suggested that Apple’s plans for the device had been delayed until 2015, according to a research note obtained by Apple Insider.

While it’s unknown how Apple would market the device, Bloomberg suggested that the over-sized iPad could be geared toward business customers. Earlier this year, Apple announced a partnership with IBM that is aimed at improving Apple’s mobile devices for enterprise use. Besides giving Apple a tablet specifically for enterprise use, the debut of a new iPad product could also reignite Apple’s overall iPad sales, which have declined over the past two quarters. 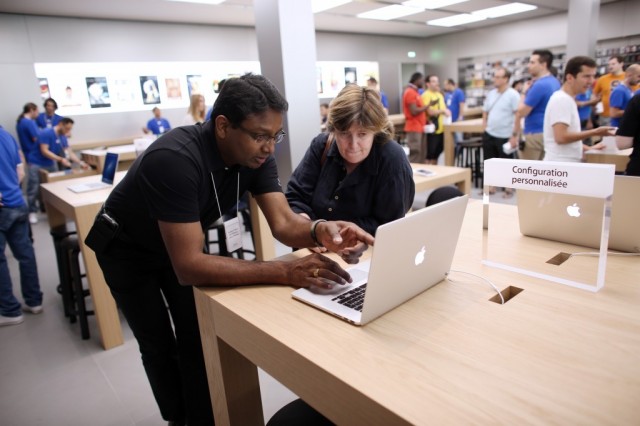 The source: According to “Taiwan-based supply chain makers” cited by DigiTimes, Apple will be launching a slimmer, 12-inch MacBook by the end of this year, or sometime in 2015. The sources noted that 80 percent of Apple’s total Mac sales come from the MacBook product line, which suggests that Apple is capitalizing on MacBooks’ popularity by adding a new model. Apple currently offers the MacBook Air in 11-inch and 13-inch versions. DigiTimes’ sources also predicted that Apple would discontinue the non-Retina 13.3-inch MacBook Pro by the end of 2014.

The background:  KGI Securities analyst Ming-Chi Kuo first predicted that Apple would launch a new 12-inch version of its MacBook laptop almost a year ago. In a note to investors obtained by Apple Insider, Kuo said that a 12-inch MacBook with an “ultra-slim clamshell form factor” would be launched sometime in 2014. In March of 2014, additional technical details about the product were posted in a WeiPhone.com forum seen by MacRumors. The anonymous leaker claimed that the device would feature a new type of trackpad without a mechanical button and would lack the usual cooling fan assembly. While the DigiTimes’ report offered no new details on the 12-inch MacBook, it does appear to bolster the earlier rumors about the device. 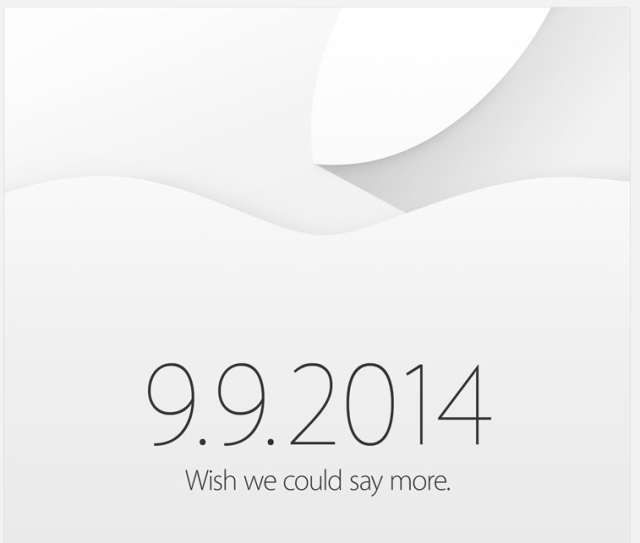 4. Will Apple unveil the iWatch on September 9?

The source: According to Re/Code, Apple will be unveiling its highly anticipated wearable tech product alongside the two new iPhone models at the September 9 media event. The so-called “iWatch” is expected to work closely with the HealthKit health data platform as well as the connected home framework, HomeKit.

The background: Assuming that this information comes from Re/Code’s usually reliable sources, it’s probably a safe bet to assume that Apple will indeed unveil its wrist-worn device at the upcoming media event. However, when the device will actually become available for purchase is another matter entirely.  In an update on Friday, Re/Code noted that its sources believe that the iWatch is not likely to go on sale before early 2015. In other words, don’t look for an iWatch under the Christmas tree this holiday season.

Re/Code’s expected availability time for the iWatch aligns with previous predictions made by KGI Securities analyst Ming-Chi Kuo, who claimed in a research note obtained by 9to5Mac that production difficulties would push the device’s release date into 2015. On the other hand, a recent research note issued by PTT Research analyst Matt Margolis predicted that the iWatch, along with the 5.5-inch iPhone 6, would both go on sale by mid-October.

The background: While the parts leaked by NoWhereElse.fr don’t provide any earthshaking revelations about Apple’s upcoming devices, they do confirm and discount several different rumors. The silver, gray, and gold SIM card tray colors confirmed that Apple will be sticking with the same colors it used for last year’s iPhone 5S. 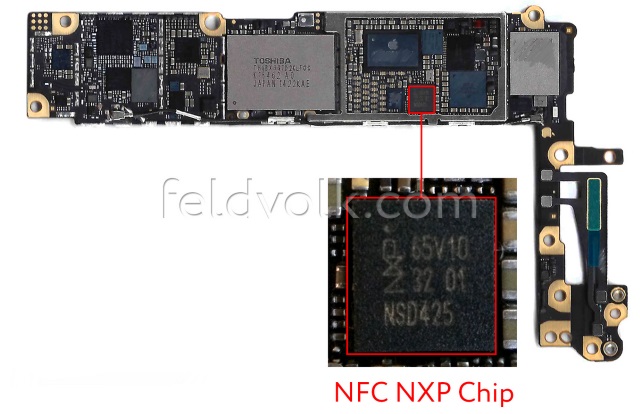 6. NXP Semiconductors will provide the NFC chip for the iPhone 6

The source: Known Apple supplier NXP Semiconductors provided the Near Field Communications (NFC) chip that will allow the iPhone 6 to be used as a digital wallet, claimed sources cited by the Financial Times last week. The claims made by the Financial Times’ sources appeared to be confirmed when well-known Apple leaker Sonny Dickson later highlighted the NFC chip in several images that he obtained from modified iPhone reseller Feld & Volk.

The background: The inclusion of an NFC chip in the iPhone 6 models appeared to confirm long-running rumors that Apple was planning on entering the mobile payments arena. Besides giving Apple a lucrative new revenue stream, an iPhone-based payments system could also kick start the overall mobile payments market in the U.S., where the use of smartphones as digital wallets has so far failed to gain widespread adoption. While it’s still unknown how Apple will implement its mobile payments system, the company already holds multiple patents that outline several possible scenarios.

The source: Feld & Volk — a Russian luxury company that resells modified iPhones and iPads — has posted a video that purports to show a fully assembled iPhone 6. While the size of the device is not specified, it is most likely the smaller 4.7-inch model. According to Feld & Volk, it was able to cobble together this device from individual components that it obtained. Although the activated device only goes as far as the “Connect to iTunes” screen, Feld & Volk’s video provides fans with what might be the best early glimpse of Apple’s iPhone 6.

The background: Feld & Volk has been the source of multiple iPhone 6 component leaks, including an image of what was purported to an iPhone 6 screen under a microscope earlier this month. While it seems remarkable that the company was able to obtain all the parts required to assemble an iPhone 6, the company has long specialized in customizing iPhones and apparently has good connections with sources in Apple’s supply chain.

That’s all the Apple rumors for last week! Be sure to check out The Cheat Sheet’s round up the latest Apple rumors every week.