The hottest tech item now is the Apple Watch, a device that’s already sold out for months to come. Like smartphones and tablets, it will be many things: an extension of your phone, a fitness bracelet, a delivery mechanism for notifications, and even a gaming machine — that is, if game developers have their way.

Gaming isn’t the most obvious application for a watch. Depending on the model you get, you’re looking at either a 1.5- or 1.7-inch screen, which doesn’t leave much room for fancy graphics or control inputs. But that’s not stopping these developers.

To get an idea of what kinds of games we’ll be playing on our wrists, we thought we’d take a look at seven  games developers have announced they will be releasing in the near future. 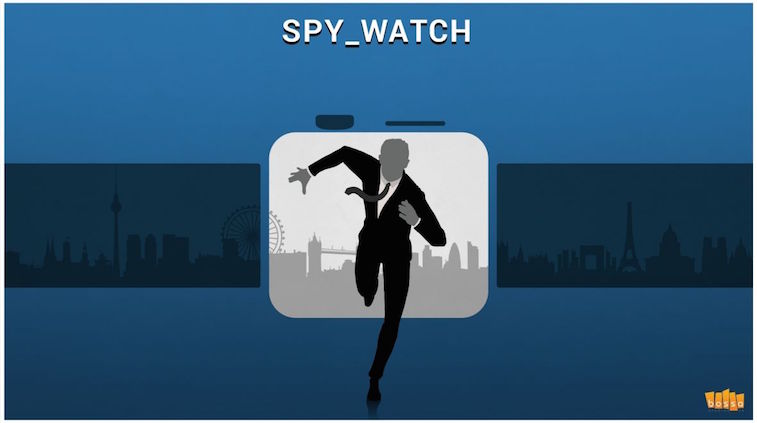 With Surgeon Simulator and I Am Bread, Bossa Studios has become a pioneer in the strange genre of games that are hard to control on purpose. So it makes sense that Bossa would be interested in making what it calls “a new type of game for a new type of hardware.”

The company’s first Apple Watch app will be Spy_Watch, a story-based game that puts you in charge of a spy who’s out in the field. The game is structured around notifications that will advance the story and offer you choices for what you’d like the spy to do. As you complete missions, you’ll earn money that you can use to improve your spy’s skills.

Like many of the games on this list, Spy_Watch is designed to be played in micro-sessions that last only five or 10 seconds. Spy_Watch will be available starting April 24, the day the Apple Watch releases for those lucky enough to be among the first to pre-order it.

Runeblade is a role-playing game from Everywear Games, a new studio formed specifically to make games for smartwatches. It looks like a pretty typical fantasy RPG, with goblins, fairies, mages, and magical artifacts. It will be free to download and will receive frequent content updates.

Everywear Games founder Aki Järvilehto told Wired: “Playing games on a smartwatch is a very different experience from tablets of phones. We wanted people to feel like it’s something effortless, fun and integrates well into your daily routines.”

What would a new computing platform be without a little solitaire? Blackjack Mini comes from Robot 5 Studios, another team assembled for the sole purpose of designing smartwatch games. Blackjack Mini is exactly what you’d expect: a game of blackjack with simple button inputs like “hit,” “stay,” “double,” and “split.”

Robot 5 also has two other games in the pipeline: a matching game called Berry Quest and a sports game called Football Twos. You can find more details about them here. 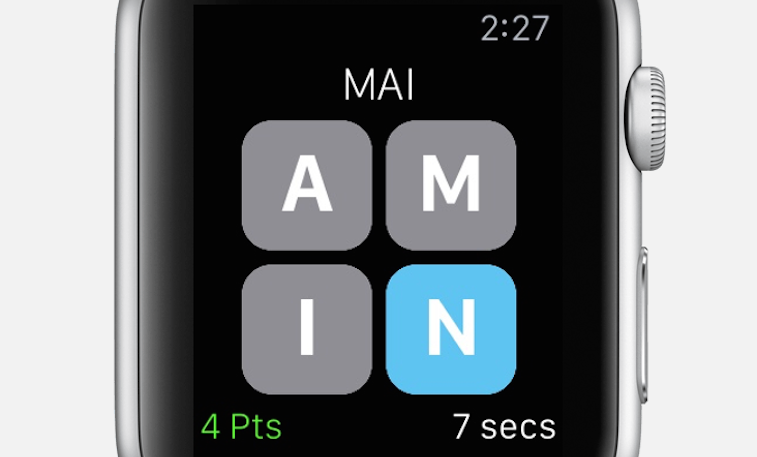 In this simple word game made by Right Pedal, four letters appear on the face of the watch, and your job is to tap them to spell out a word. Then four new letters appear and you wash, rinse, and repeat for 30 seconds, completing as many words as you can. Players can compete against each other in real time or just chase a coveted high score. Snappy Word will be a free game (with ads), and will also be available on iPhone and iPad. 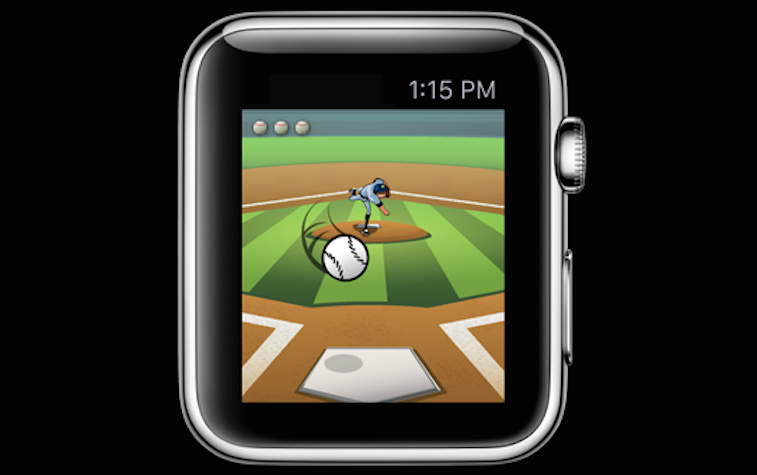 If you boil down baseball to its essence, and then keep boiling for another few hours, you might get something like Watch This Home Run, a game about hitting balls into the bleachers by tapping the screen at just the right time. You’ll have to pay close attention, because the pitcher throws different kinds of pitches, like curveballs and knuckleballs. The game starts out slow and easy, but by the time you reach the World Series, it will offer quite the challenge.

Letterpad is from Nimblebit, the maker of the popular iOS game Tiny Tower. It’s not a full Apple Watch game in and of itself, but rather a second screen for a word game for iOS. Watch the video above to get a sense of how the two screens interact with one another.

Another game that will only work in conjunction with an iOS app is developer WayForward’s Watch Quest. In this adventure game, your iPhone serves as your kingdom, where you’ll select your hero and load him or her up with equipment for a journey.

Once that’s done, the actual journey takes place on the watch, where you’ll battle enemies, solve puzzles, and search for treasure. The initial download will be a free tutorial journey, but to keep playing you’ll need to purchase extra content as DLC.