8 Things You Didn’t Know About How We Use Apps 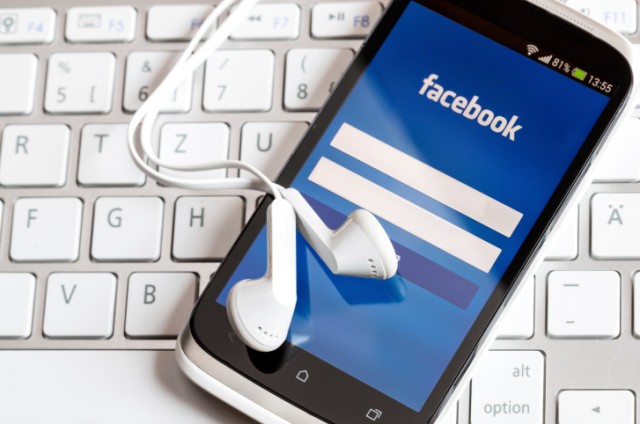 Mobile apps are a huge part of how we accomplish tasks on our smartphones and tablets everyday. But have you ever thought about how much we use apps? How many apps we download every month? Or even how our age or mobile operating system correlates with what kinds of apps we use the most? If you’d like to know, you’re in luck: According to comScore’s recent U.S. Mobile Apps Report, here are eight things you didn’t know about how we use the apps on our smartphones and tablets.

1. Apps account for more than 50 percent of the time we spend with digital media. 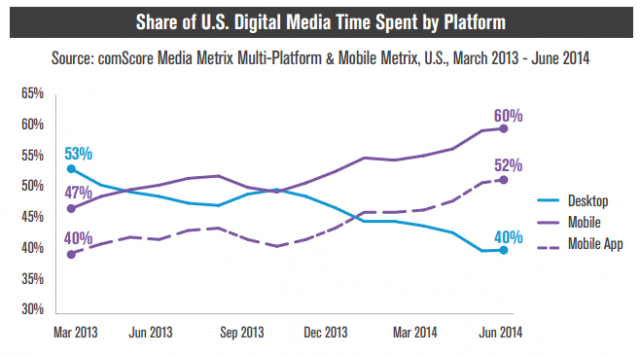 Apps also account for a full seven of every eight minutes of media consumption activity on mobile devices. And interestingly enough, app activity reaches a slightly higher percentage of smartphone use than tablet use, with apps comprising 88 percent of smartphone activity vs. 82 percent on tablets.

2. More than a third of smartphone users download at least one app each month — but 65.5 percent download zero apps each month. 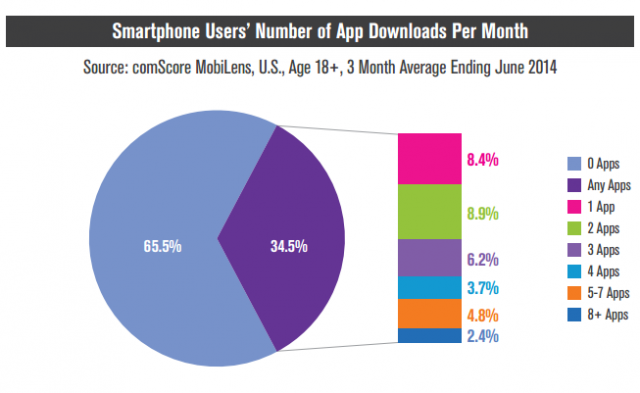 While 34.5 percent of smartphone users download at least one app every month, a full 65.5 percent don’t download a single app. (Let’s think about that for a second. Only about a third of smartphone users download any apps in an average month.) There are a couple of possible factors at play. Almost all of the most-used apps — which we’ll get to in a few pages — is an app that’s been around for a while. It stands to reason that most people use well-established apps to complete mobile tasks, instead of constantly downloading new ones. Additionally, we’ve talked before about how app stores are terrible for discovery, so even a user wants to find a new app to download, the Android and iOS app stores don’t make it easy.

3. Forty-two percent of all time spent on smartphones occurs in each individual’s single most-used app. 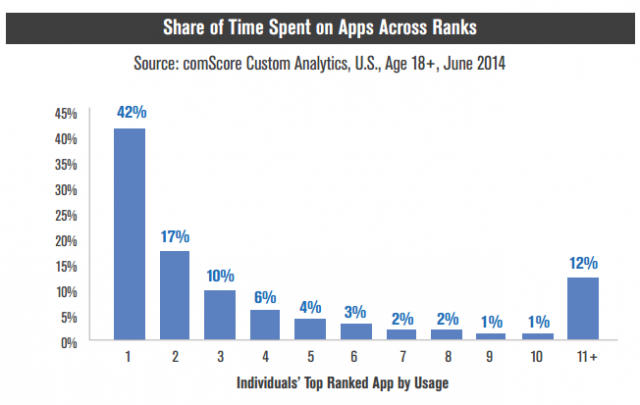 With 42 percent of the time a user spends on his or her smartphone going to the single app that he or she uses the most, almost three out of four minutes of app usage time is spent in the user’s top four apps. This further reinforces the idea that users have already established which apps are useful for the tasks they want to complete on their smartphones, and it seems that they stick to those apps for the majority of the time they spend with the apps on their devices.

4. iOS users are generally have higher incomes than Android users. 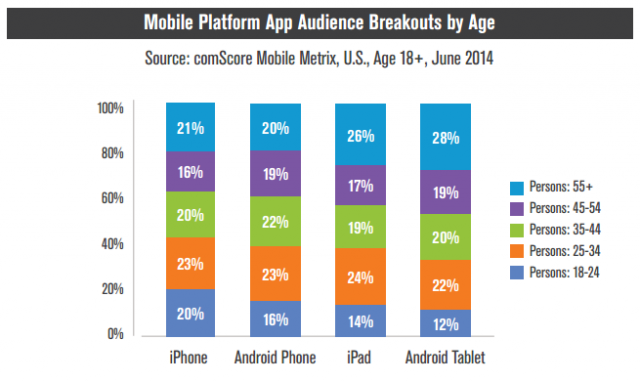 (For context: Android is the top mobile operating system in the U.S., with 83.8 million subscribers — 16.4 million more than Apple’s iOS subscribers. Apple, in turn, is the top smartphone original equipment manufacturer, with 67.4 million owners and, as comScore feels the need to point out, 100 percent of the iOS device market.) 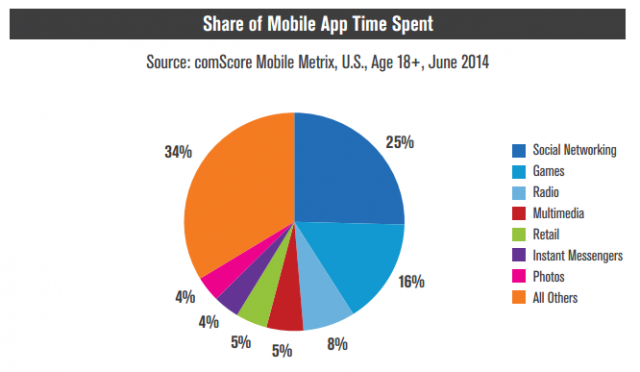 The usage of a few categories of mobile apps accounts for a majority of the time that users spend with mobile apps. Social networking, Games, and Radio are responsible for almost half of the time that we spend in mobile apps — making it clear that as useful as a smartphone can be when you’re looking for directions or searching for information, we spend a lot of time using them for entertainment and communication. 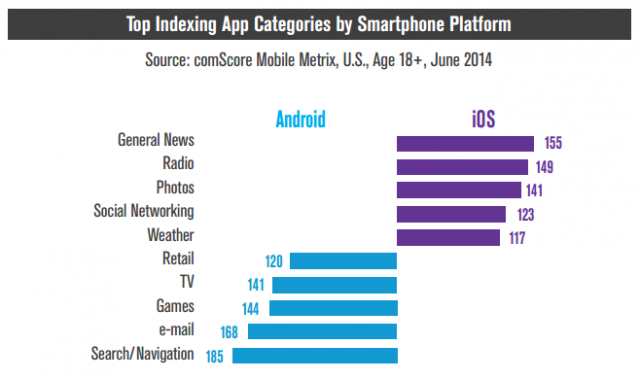 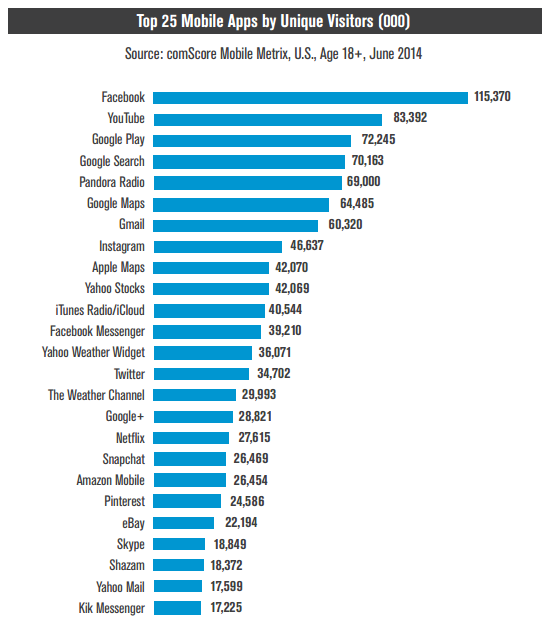 The most popular apps by monthly unique visitors doesn’t hold that many surprises: the list is dominated by apps by major digital media brands, such as Facebook, Google, Apple, Yahoo, Amazon, and eBay. As comScore notes, those six brands account not only for nine of the top ten most-used apps, but for 16 of the top 25 and 24 of the top 50.

Facebook is far ahead of the competition in terms of both audience size and the time spent by users in each of the different demographic segments. And across all age segments, users spend the most time in what comScore terms “leisure-oriented” apps in the Social Networking, Entertainment, and Messaging categories. The younger the age of the user, the higher the concentration of activity in these types of apps, as older users also spend time in Mail and Maps apps.

It’s also worth noting that there aren’t any games in the top 25 apps — perhaps because there are few games that can rival the lasting power of apps like Facebook, Google Search, or Instagram.

8. Facebook is by far the most popular app, regardless of users’ age. 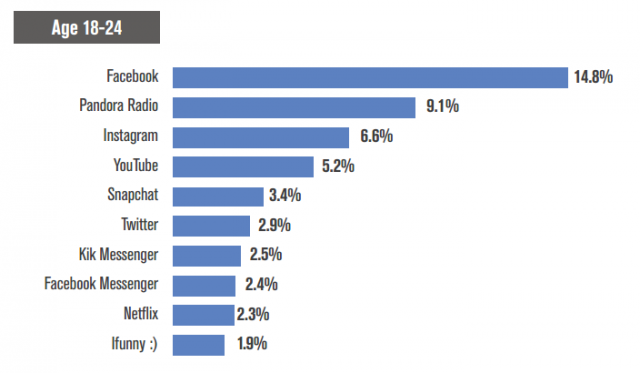 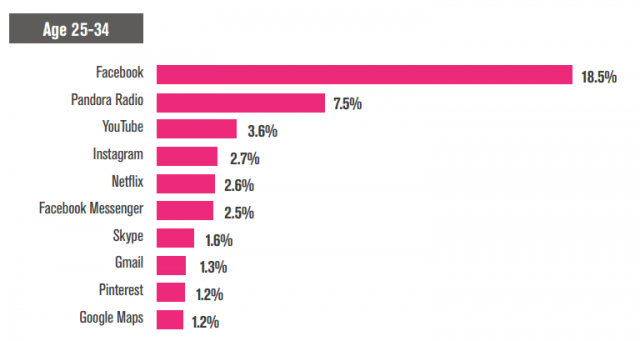 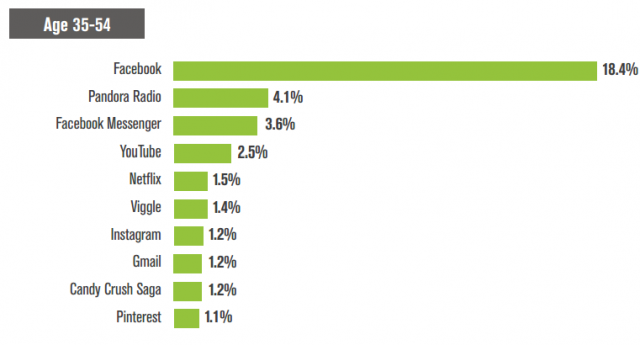 Whether you’re 18 or 55, chances are good that you spend a lot of time on Facebook on your smartphone. That’s pretty impressive. It’s also interesting to note how Pandora Radio hovers near the top of the usage charts — in second place behind Facebook for every age group except smartphone users 55 and over.