With Oculus Rift gaining enough popularity to drive Facebook (NASDAQ:FB) to spend $2 billion to acquire it and Sony (NYSE:SNE) jumping up to announce its own virtual reality platform, Project Morpheus, this may be the best time to be in the business of making virtual reality equipment. One Chinese startup is looking to add something to the mix with its own VR headset that it claims is on par with Oculus Rift and Morpheus. That project is called ANTVR.

ANTVR’s agenda is simple: offer something that’s for everyone. The device can work as a simple screen for watching movies or whatever else — though that would be a major under-use of the technology stored in the device. Watching video covers the broadest range of consumers. And then ANTVR also keeps the gamers in mind, who might be the consumer group most interested in the future of VR and the platforms that will be available.

On top of Blu-ray players and Android devices, ANTVR claims to be compatible with PlayStation, Xbox, and PC. In the creator’s words, “Compatible with all games & movies!” The support for multiple platforms may be a winning factor for many consumers, as Project Morpheus is naturally limited to PS4 and Oculus Rift is for PC. But the multiple supports aren’t the only thing it has going for it gaming-wise — it has a secret weapon up its sleeve.

The ANTVR proves it has gaming in mind with a built-in controller that transforms between a gun, a joystick, and a controller with its own multi-axis sensors. Parts of the controller can even come apart during game play to simulate a grenade throw for the user. On top of that, the ANTVR’s sensors can recognize when a player takes a step in any direction, jumps, or crouches, and then translate that into motion within the game.

For all intents and purposes it would seem ANTVR has a solid competitor to go up against Oculus Rift and Project Morpheus. It also has ambitious distribution goals. If funded, it plans to distribute the product by September of this year. Project Morpheus and Oculus Rift don’t have confirmed commercial launches, though developer versions of Oculus Rift have already distributed. ANTVR also has the Kickstarter version priced as low as $270 for early backers, though one thing that could stand in its way is the HDMI cable or the large added cost for a low-latency wireless transmission of video.

With the campaign goal of $200,000 more than half-way funded and more than a month still left to go, it seems assured that this project will be funded and be pitted against the big players in VR. The questions that remain are whether ANTVR will quickly get bought up like Oculus Rift, or if all of these VR products will be part of just another false VR revolution that sees the release of numerous products that never gain traction.

If you’re wondering about VR’s history and the trouble it’s had gaining traction in the past, you may be interested in our previous article on VR devices that launched well before Oculus Rift, Project Morpheus, and ANTVR ever existed. You can see that story here.

With news of Facebook’s purchase of Oculus Rift making waves and the announcement that Sony is working a virtual reality headset called Project Morpheus, it’s clear that virtual reality is having something of a resurgence — and potentially a renaissance. But what are the odds of it really coming to fruition?

These news VR headsets are not the first of their kind. VR gaming has been around for decades, but it was simply never a success. Perhaps it was just technological limitations of the time, or a market that wasn’t ready to embrace the technology (or headaches). Maybe it was just the price tag. To understand what may be different this time around, it’s important to take a look at some of the iterations of VR in the past. 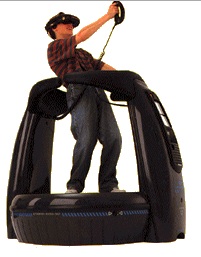 In the early 1990s, Virtuality Group produced a set of VR systems that included a stand-up arena type system and a vehicle cockpit type. Both used headsets with built in screens to put gamers right into the position of the characters they played in the games. Between a multiplayer first-person shoot called Dactyl Nightmare that let players run around shooting one another as a treacherous pterodactyl attacked them as well as several other games, Virtuality had a memorable presence in arcades.

Unfortunately, with price tags in the tens of thousands, the VR systems were far too expensive for consumers. That didn’t necessarily keep Virtuality from being  a proponent in the early push for VR technologies, but it did keep from becoming mainstream enough to make VR the next revolution in technology.

Apple wasn’t the first one with “i” products, and Virtuality Group wasn’t the only one working on VR projects in the 1990s. Virtual I/O put together a headset capable of stereoscopic 3D with color and head tracking — the visuals turned when players turned their heads — and for a price tag under $1,000.

Though the iGlasses were thoroughly capable of offering a VR experience to customers, they never became huge. As the story has often seemed to go with VR, nothing has ever truly ignited the market for it. At least Virtual I/O had a good idea with the name of its device. A quick search for iGlasses will result in many different devices showing up, not all of them the ’90s VR headset. 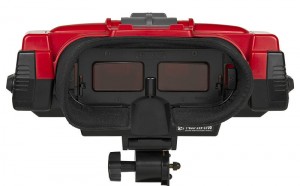 Many might remember the short-lived Virtual Boy of the mid ’90s. Nintendo released the machine and it could be found in Blockbuster video stores for kids to try while their parents looked for movies. Despite being backed by one of the biggest game companies of the day, it did not succeed.

The virtual boy wasn’t very colorful, and though it had stereoscopic 3D, it also lacked high quality graphics. It was cheaper than many of the other VR options of the time, but it didn’t do a lot of what made VR impressive — there was no head or hand tracking, so it was more of a 3D viewing system rigged out to look like VR. In the end, it wasn’t the spark VR needed, nor was it the one Nintendo needed. 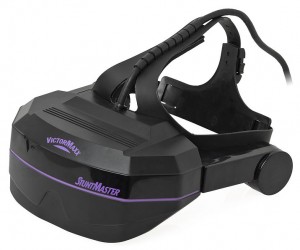 One of the more impressive VR headsets to come out was the Cybermaxx by Victormaxx. It was preceded by the Stuntmaster, which was more or less an LCD screen embedded in a visor that included an odd system for head tracking that used a pole coming up from a user’s shoulder. The Cybermaxx upped the ante with solid head tracking, colorful stereoscopic 3D, and a pricetag below $1,000.

Despite support for a number of games on both console and PC, this system also failed to become a huge success. The story of VR stayed the same.

Forte Technologies released the VFX-1 right in the middle of the ’90s and it proved a highly capable VR headset that may have been the best to come to market by that time. With stereoscopic 3D, multi-axis rotation for head and hand tracking, and both the ability to play games that weren’t actually supported by the system, the VFX-1 had a lot of the makings to be a success. You can check out the old promotional video for the device up above.

At $600, it might have been a little expensive, but it was a particularly advanced technology for the time. Compared to the Virtuality gaming system, the VFX-1 was a steal. Unfortunately, the VR renaissance wasn’t destined to happen then. Even after Forte Technologies was bought by Vuzix and the more expensive VFX 3D was released, it didn’t reach the mainstream.

Vuzix continues to produce headsets for consumers, but they sit at the fringe. A more recent product, the Wrap 1200, offers a close-up, head-mounted viewing system capable of 2D or 3D and able to receive input from a multitude of devices, including video game consoles. As an added option, it can include head-tracking technology. The lack of hubbub shows that it’s still at the fringe.

There are still plenty of games that come close to a full VR experience. Arcades tend to offer them in the form of games based in a cockpit that players actually climb into. A notable one out of Japan is Namco’s Mobile Suit Gundam: Bonds of the Battlefield arcade game.

By putting players into a cockpit that simulates that of the giant mech they operate and adding a rap around screen that makes it seem like players are looking out of their mech, it simulates the experience of being inside and controlling the mech. Check out the video below — the action starts at about 1:20.

Fortunately for gamers who have been waiting for VR to make it big, the VR renaissance seems much more likely to get into a groove this time around. With support for Oculus Rift coming from Facebook, and Sony getting in on the action with Morpheus. It’s clear that there is some big pressure to finally push VR into the mainstream and make it more widely available and supported by more developers.