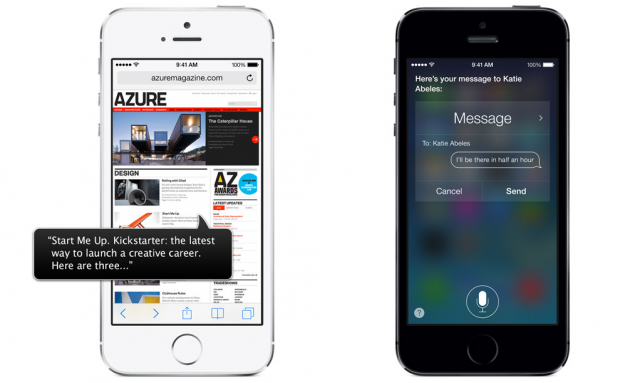 In an age when everyone uses a touchscreen-based smartphone, people who are blind or visually impaired are far from the exception. The iPhone is an especially useful device for those with disabilities, and advocates want the developers behind popular iOS apps to make it even more so by improving app access to be in line with Apple’s (NASDAQ:AAPL) guidelines.

AppleInsider reports that members of the National Federation for the Blind will embark on a new campaign to get Apple to consider accessibility when approving apps for the iOS App Store. Advocates for the blind and visually impaired acknowledge that Apple’s additions of features like VoiceOver, plus screen-reading capabilities expected to deploy with iOS 8, have represented great improvement.

It’s perhaps counterintuitive, but the iconic smartphone that gave rise to the era of touch-based phones with few physical buttons has brought revolutionary accessibility features for those with disabilities. However, users and advocates argue that Apple hasn’t done enough to get third-party developers to add accessibility features to their apps, making the usefulness of Apple-built features like VoiceOver spotty, especially when apps don’t include button labels that the feature can read out loud.

The NFB sued Apple in 2008, and the company paid $250,000 and put new accessibility features for iTunes in place. Since then, it’s added accessibility improvements to the iPhone, iPod, iPad, and Apple TV. NFB members aren’t yet calling for more litigation, but some view it as a possible, even inevitable development if Apple doesn’t find a way to improve accessibility or implement new requirements. As Reuters reports, advocates believe that federal law requires that apps be made accessible to everyone, but courts have not yet ruled on the issue.

Both Apple’s iOS and competing Android by Google (NASDAQ:GOOG)(NASDAQ:GOOGL) provide developers with guidelines on how to make apps accessible to users with disabilities. But unlike other regulations that are strictly enforced in Apple and Google’s respective app stores, the accessibility guidelines are just that — guidelines — and aren’t a requirement for developers who want to distribute an app through the store. Additionally, neither store offers an accessibility rating system or a separate category of compliant apps.

Apple’s award-winning VoiceOver, which tells users which button or icon they’ve touched, is just one of the assistive technologies that Apple has implemented, and features like Siri and Dictation help users type or launch apps. Even a smartphone’s camera can work in connection with assistive apps to help users identify dollar bills or successfully shop for groceries on their own.

It’s those third-party apps that have made a world of difference for users who are blind and visually impaired. An Atlantic feature from two years ago highlighted some of the features and apps available even then that can be useful on a daily basis, with transformative effects. Sendero, an accessible GPS app, can tell users where they are and what’s nearby. LookTel Money Reader identifies bills, which can’t be easily told apart, like coins can. Audible reads books aloud. HeyTell enables users to “speech text,” recording a message to send to another user.

The article also cited HopStop, since acquired by Apple, an accessible solution to get public transit directions. Other apps can detect lights left on, sense motion, identify colors of clothing, record and organize lists, crowdsource answers to questions about objects photographed with the phone, or read emails, Twitter, Facebook, weather, stock prices, and RSS feeds.

Intuit’s (NASDAQ:INTU) Ted Drake last year told Forbes, in reference to the iPhone’s innovations for the blind and visually impaired, that such life-changing innovations come about in spite of expectations about the limitations of the technology. He said that the developers behind such innovations “didn’t really think about preconceived ideas. They didn’t say ‘well a blind person can’t use a phone that’s only glass, because there are no tactile buttons. They said here’s a glass surface. Let’s make it accessible.’”

Currently, iOS apps need to include labels for buttons in order for VoiceOver to be able to read out the features and graphics to blind and visually impaired users. Uber and Twitter both have apps that are commonly commended for their accessibility, while apps by Bank of America, TuneIn, Southwest, Mint, and Netflix draw criticism for their uneven support and tendency to roll out updates before updating the accessibility features accordingly.

And while Apple is encouraging developers to implement accessibility features, it’s also improving those features on the iPhone itself. Apple’s iOS 8 will include new accessibility features like a “speak screen” that will be able to read whatever is on the screen, improved zoom, and compatibility with hearing aids. However, those efforts aren’t enough for those who want all apps to be accessible to users with disabilities. Reuters spoke to Howard Rosenblum, chief executive of the National Association of the Deaf, who expressed a sentiment similar to that of some NFB members: “Any app should be accessible to everyone.”

It’s unclear which course the debate will take. Should users, advocates, and lawyers seek court protection of the accessibility rights that they argue exist under federal law? Will the resulting litigation rule in favor of users and advocates or find that developers aren’t legally required to build accessibility features in certain or all categories of apps? Should advocates bring legal action against Apple, Google, or developers? Or should they just encourage Apple to make accessibility a requirement instead of an option, or pressure it to at least create a dedicated section in the App Store?

Some take the view that developers will be willing to help on their own once they learn that there’s a problem. Improving accessibility to their apps can open up an entirely new market, with Reuters reporting that 1.1 billion people worldwide have disabilities; 21 million U.S. adults experience vision loss. An additional 28 million have a hearing impairment, a statistic that further underscores the significance of the debate at hand — plus the huge user base that’s so far largely untapped.