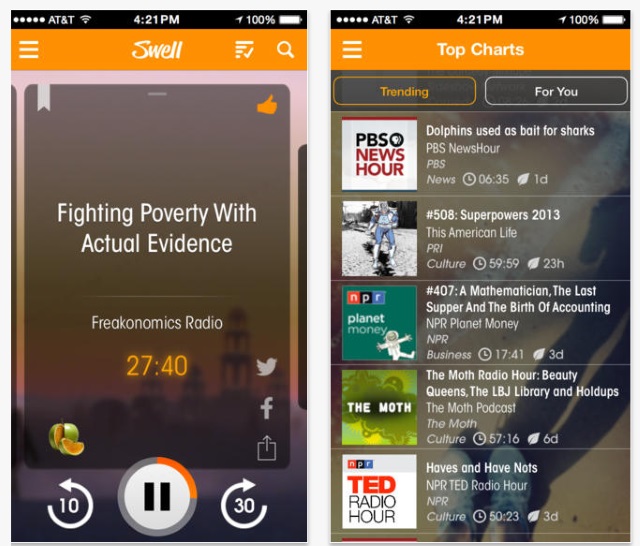 Apple (NASDAQ:AAPL) users who are fans of talk radio may soon find it easier to discover shows that they want to hear. According to “multiple sources” cited by Re/code, Apple is close to acquiring Swell, a mobile audio streaming app with a strong focus on spoken-word content. Like Pandora’s (NYSE:P) music curation service, Swell uses a proprietary algorithm to offer listeners personalized recommendations based on their previous listening behaviors, as well as ratings from experts and other listeners. According to Re/code’s sources, the purchase is expected to cost Apple about $30 million.

The acquisition of Swell will likely be welcomed by Apple’s Podcasts app users, since the Cupertino, California-based company’s native app currently has a dismal 1.5 out of 5 stars rating from users who have complained of problems with everything from the app’s syncing functions to its user interface. On the other hand, the Swell app currently has a 4.5 out of 5 star rating from customers who have praised its effective curation service and its intuitive user interface. The Podcasts app may soon be revamped with Swell’s interface since Apple will not only be acquiring Swell’s technology but also many members of the team that developed the Swell app, according to sources who spoke to Re/code.

Although Swell is still currently available as a free download from the App Store, Re/code’s sources noted that the app is expected to be shut down this week as part of the deal. While Swell was primarily focused on the iOS-based device market, it had also recently started offering a beta version of an Android app.

Swell adds yet another company to Apple’s growing list of acquisitions. While Apple’s record $3 billion purchase of Beats Electronics dominated headlines earlier this year, the company was also making dozens of smaller acquisitions that mostly flew under the radar. As recently noted by CEO Tim Cook during the company’s fiscal 2014 third-quarter earnings call, these acquisitions are intended to improve many of Apple’s existing services and products, as well as create new ones.

“Not counting Beats, we’ve completed 29 acquisitions since the beginning of fiscal year 2013, including five since the end of the March quarter, and we have brought some incredible technology and more importantly some incredible talent into Apple in the process,” said Cook, according to an earnings call transcript provided by Seeking Alpha. “We are hard at work and investing heavily on exciting opportunities across our business and we have an incredible pipeline of new products and services that we can’t wait to show you.”

The deal for Beats Electronics — which included the Beats Music subscription-based streaming music service — also provided Apple with a unique music curation service. Along with Swell and BookLamp, these acquisitions suggest that Apple is planning a major overhaul of multiple services in order to provide its users with more intuitive and intelligent recommendations.