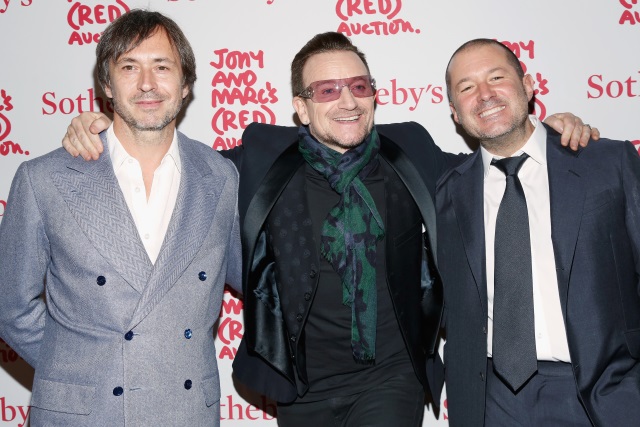 In a move that demonstrates the importance that artistic craftsmanship has in Apple’s overall vision, the iPhone maker has hired renowned industrial designer Marc Newson. The news of Newson’s hiring was first reported by Vanity Fair. “Marc is without question one of the most influential designers of this generation,” said Apple design chief Jony Ive in a statement obtained by Vanity Fair. “He is extraordinarily talented. We are particularly excited to formalize our collaboration as we enjoy working together so much and have found our partnership so effective.”

Newson is widely considered one of the world’s foremost industrial designers and has won multiple international awards and honors for his work, including a Commander of the Order of the British Empire (CBE) appointment in 2012 “[f]or services to design in the UK and worldwide,” according to The Telegraph. Newson-designed objects have become highly sought after art pieces and a prototype of his iconic “Lockheed Lounge” chaise lounge sold at auction for $2.1 million in 2010, reports Media Bistro.

Apple design aficionados may already be familiar with Newson and his work from his collaboration with Jony Ive for a charity auction last year that benefitted (RED), a non-profit founded by Bono and Bobby Shriver. The auction featured forty-four objects that were selected by Ive and Newson, including several Apple products that were personally customized by the designers. One of the customized objects was a red-colored Mac Pro that sold for $977,000, setting a record for the most expensive personal desktop computer ever sold. As noted by auction house Sotheby’s, the auction raised over $26 million for The Global Fund to fight AIDS in Africa after the sale proceeds were matched by the The Bill and Melinda Gates Foundation.

Needless to say, adding Newson to the company’s design team is a major coup for Apple and will give the Cupertino-based company not one, but two, of the most respected industrial designers working today. Besides having professionally collaborated on several projects, Ive and Newson are also longtime personal friends. When discussing last year’s (RED) auction, Ive told Sotheby’s that, “It’s not every day that you get to curate a collection with your best friend and sell it off to help a lot of people.”

“I’m full of admiration and respect for the extraordinary design work that has been produced by Jony and the team at Apple,” said Newson in a statement provided to Vanity Fair. “My close friendship with Jony has not only given me a unique insight into that process, but the opportunity to work together with him and the people that have been responsible. I am enormously proud to join them.”

While Newson will undoubtedly benefit Apple’s already impressive design team, his hiring can also be seen as part of the company’s recent trend of hiring people who are widely considered cultural movers and shakers. Earlier this year, Apple hired former Burberry CEO Angela Ahrendts to be the company’s new senior vice president of retail and online stores. Ahrendts was credited with revitalizing the ailing British luxury fashion house with her retail innovations. Similarly, Apple hired music industry innovator Jimmy Iovine and legendary rap artist and music producer Dr. Dre as part of the company’s acquisition of Beats Electronics and Beats Music. In other words, Apple is poaching the most talented and trendsetting people in any field that is even remotely related to consumer electronics. Perhaps the only commonality between Apple’s various high-profile hires has been their shared commitment to excellence in their respective professions.

Ive noted the kinship between his and Newson’s approach to design in a joint interview with Vanity Fair last year. “We [Ive and Newson] are both fanatical in terms of care and attention to things people don’t see immediately,” said Ive. “It’s like finishing the back of a drawer. Nobody’s going to see it, but you do it anyway. Products are a form of communication — they demonstrate your value system, what you care about.” With the hiring of Newson, Apple is making it clear that cutting-edge, quality design is quite high in its value system.