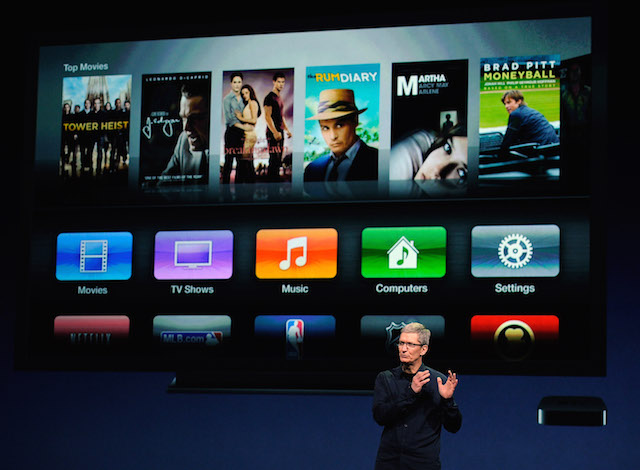 You weren’t sick of hearing about Apple, were you? Good, because the spigot of Apple news and rumors simply can’t be shut off at this point. Tech-giant is reportedly getting ready to jump into the business of offering a television service. No, we’re not talking about Apple TV — this is something different. A product that may have a whole new industry shaking in its boots.

According to The New York Times, Tim Cook and company are talking with an unknown number of television groups and media companies about bringing an online-based TV streaming service to its products. That would include iPhones, iPads, and even Apple TV devices, and would essentially be like a very slimmed-down cable television package — including a set number of popular broadcast and cable channels, at a much more reasonable price than what cable companies typically offer.

The package Apple wants to deliver to customers will reportedly include a basic lineup of channels, including NBC, CBS, FOX, and ABC, along with premium cable channels like ESPN and Discovery. The estimated price is expected to land somewhere between $20 and $25 per month. And again, the package would be accessible through a number of Apple’s devices. It’s yet another tech offering that Apple is apparently experimenting with, along with watches and automobiles, which may or may not prove to be successful.

The cable television industry has been taking a battering as on-demand and streaming services have grown in popularity, and Apple is, in a way, finding a sort of in-between niche in the market. This service could potentially appeal to consumers who still want to watch live sports and their local news, yet get rid of their bloated and often very expensive cable packages.

Apple has yet to make an official comment on the new service, but news of its existence has been circulating since at least early February, when tech news site Recode first spilled the beans. Recode says that this isn’t the first time Apple’s leadership has asked its employees to look at “cracking TV,” and that there was a previous attempt dating back to 2009.

So, why is Apple evidently willing to give this project another shot? Well, the timing is impeccable, and the technology is finally in a place where it’s more than feasible and cost-effective. Another reason is that people are actively looking for an alternative to existing services. According to the American Customer Satisfaction Index (ACSI) for 2014 last year, customer satisfaction with the industry as a whole only tallies up to around 65%, per CNBC.

But not only are people getting fed up with cable providers, prices are also climbing to new heights every year. A report issued by the FCC says that the average monthly price for expanded basic cable service climbed to $64.41 as of January 2013. That number has likely increased in the two years since as well. So, for consumers who are quickly growing unhappier with their providers, all the while paying more for a service their increasingly unhappy with, there is an obvious opening in the market.

On-demand streaming services like Netflix kicked off the cord-cutting revolution in many respects, and many others have followed suit. HBO now has a stand-alone streaming application, as do many networks and movie studios. But there has still been one big problem that has kept some consumers tied to their cable boxes: Those services don’t deliver traditional TV options — including live sports, which actually accounts for a fairly large percentage of monthly cable bills.

If Apple is able to pull the best of both worlds together into one streaming package, and put a price on it that is reasonable, yet still considerably lower than a premium cable subscription, then there is really no reason to think that this idea shouldn’t work. In fact, all things considered, it should be a hit.

And for Apple, there’s really no reason not to give this project a go. After all, the company seems to have more money that it knows what to do with, and putting a unique spin on consumer tech devices is its signature move. Customers also instinctively flock to Apple’s new offerings anyway, so there’s likely a built in level of success to begin with. For a company trying to find a way to diversify its profit-generation (which relies on iPhone and iPhone-related purchases), TV might be the perfect answer.