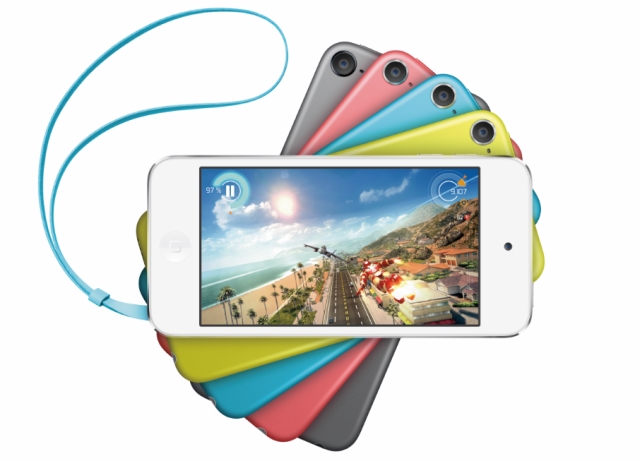 Despite the addition of a camera, Apple also dropped the price of the new 16GB iPod touch to $199 from the previous entry-level model’s price of $229. The larger capacity iPod touch models also saw a price drop. The 32GB model that previously cost $299 is now priced at $249, while the 64GB model dropped from $399 to $299.

Expect for the addition of a rear camera, the hardware and software for the 16GB iPod touch remains the same with an A5 processor, 4-inch Retina display, and the iOS 7 mobile operating system. However, as noted by Apple in its press release, “This fall, iOS 8 will be supported on the entire iPod touch lineup.” The loop wrist strap, which is included with the purchase of the 32GB and 64GB models, is also still sold separately for the 16GB model.

Overall portable media player sales, including the sales of Apple’s iPod, have been steadily declining over the past several years. As noted by Apple in its fiscal second-quarter earnings report, the company only sold around 2.7 million iPod units in the March quarter, a decline of 51 percent from the same quarter last year. According to Apple, the iPod was the only major product category to not see an increase in unit sales during the company’s last two quarters.

However, despite the iPod’s falling sales, Apple continues to dominate this shrinking market. According to data cited by NPD Group analyst Benjamin Arnold via Apple Insider, Apple’s iPod accounted for 72 percent of the total market for standalone music players at the end of 2013. The analyst noted that the declining popularity of the portable media player is primarily due to cannibalization from the smartphone market as the digital content-related functions of devices like the iPod have been gradually subsumed by devices like the iPhone.

The new lower cost 16GB iPod touch, as well as Apple’s many other iPod models, will likely help the Cupertino-based company maintain its lead in this dwindling market. Besides the iPod touch, Apple also offers the high-capacity iPod classic, the ultrathin iPod nano, and the minimalist iPod shuffle.