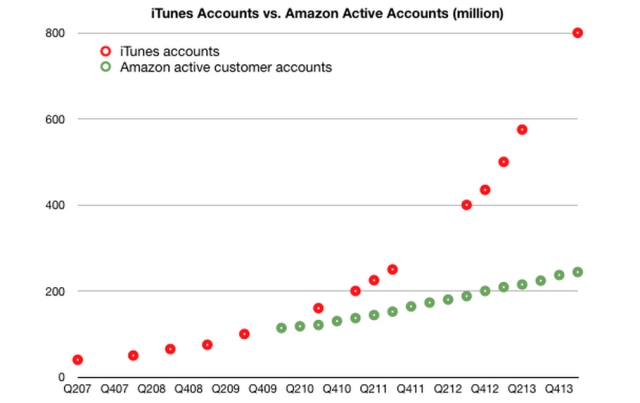 Earlier this year, The Wall Street Journal cited unnamed “people familiar with the situation” who said that Apple (NASDAQ:AAPL) executives had met with various industry leaders to discuss the creation of an Apple mobile payments service. A careful analysis of Apple’s iTunes account numbers recently completed by 9to5Mac’s Ben Lovejoy suggests that Apple has a potential active user base for a mobile payments service that is much larger than Amazon’s (NASDAQ:AMZN). According to 9to5Mac, Apple likely has at least twice as many credit cards on file as the e-commerce giant.

According to a transcript of Apple’s recent earnings call, provided by Seeking Alpha, Tim Cook stated, “We now have an almost 800 million iTunes accounts, most of these with credit cards.” Cook made a similar comment about the number of actual credit cards on file compared to the total number of iTunes user accounts in an interview with The Wall Street Journal’s Daisuke Wakabayasi earlier this year.

“We have almost 800 million iTunes accounts and the majority of those have credit cards behind them,” Cook told The Wall Street Journal. Based on those comments, Asymco analyst Horace Dediu created the chart above, which compares the total number of iTunes accounts to the total number of Amazon accounts. As seen in the chart, Amazon has a little more than 200 million active user accounts, compared to Apple’s 800 million.

These numbers could make Apple a formidable player in the mobile payments service arena. Apple already allows users to pay for multimedia items and apps through its iTunes Store, while iPhone 5S owners can even authenticate payments via the device’s Touch ID fingerprint scanner. Cook noted the potential of a Touch ID-enabled mobile payments service that includes other retailers and businesses in his interview with The Wall Street Journal.

“We already have people using Touch ID to buy things across our store, so it’s an area of interest to us,” Cook told the Journal. “And it’s an area where nobody has figured it out yet. I realize that there are some companies playing in it, but you still have a wallet in your back pocket and I do too which probably means it hasn’t been figured out just yet.”

While it’s not clear if even Apple has “figured it out just yet,” the Cupertino, California-based company’s massive collection of user credit card information gives the iPhone maker a huge head start over more established e-commerce companies like Amazon. Several prominent industry watchers and analysts have predicted that Apple will unveil a mobile payments service this year, including Piper Jaffray analyst Gene Munster. “The three leading product categories include the watch, TV and mobile payments,” wrote Munster in a recent note to investors.