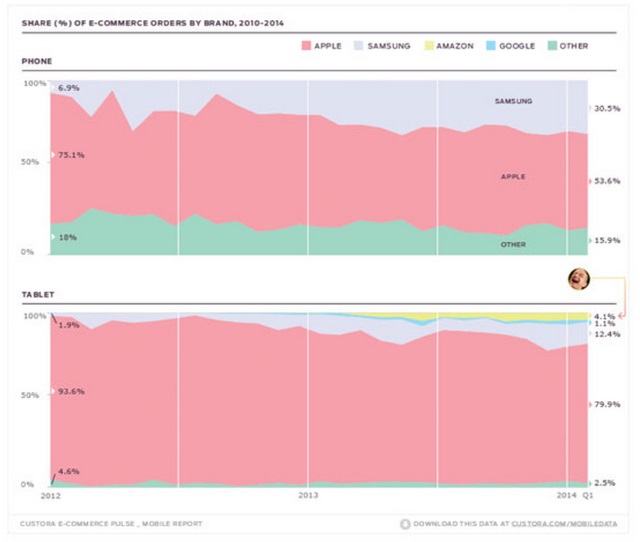 When it comes to online shopping via mobile devices, Apple (NASDAQ:AAPL) users take the cake. According to a recent report from e-commerce analytics platform Custora, Apple’s iOS continues to account for the majority of orders in a mobile e-commerce market that is bigger than ever.

Although Apple kept its mobile e-commerce crown in the March quarter, Custora noted that the Cupertino-based company has lost significant market share in the smartphone segment since the rise of Samsung as a major smartphone competitor. In 2012, Apple’s iPhone accounted for 75.1 percent of the e-commerce orders placed from mobile phones, compared to the 53.6 percent share it held last quarter. Meanwhile, Samsung’s share of smartphone orders has grown from 6.9 percent in 2012, to 30.5 percent last quarter. However, Samsung has been unable to make similarly dramatic gains in the tablet segment, where it has only grown from 1.9 percent in 2012, to 15.3 percent last quarter.

Not surprisingly, the increase in the number of online store visits from mobile devices was accompanied by a similar increase in mobile e-commerce revenues. “In the past four years, the mobile e-commerce market grew 19-fold: From $2.2 billion in 2010 to $42.8 billion in 2013,” wrote Custora’s Kyle Shepherd. “This represents 1875 percent growth over these four years, and 111 percent 4-year CAGR (Compound Annual Growth Rate.)” On the other hand, the percentage of orders placed through mobile devices still lags the percentage of visits from mobile devices. This suggests that many consumers are using their mobile devices to browse, while placing their orders later on a desktop computer.

Will Apple be able to maintain its lead throughout 2014? While there is little doubt that Apple will maintain its lead in the tablet segment of the e-commerce market in the foreseeable future, the company appears to more vulnerable in the smartphone segment. However, with the expected launch of two new larger screen iPhone 6 models this fall, Apple may soon reclaim some its lost market share from Samsung in this segment.