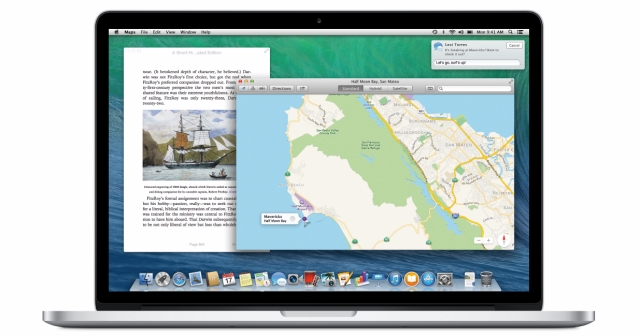 Apple (NASDAQ:AAPL) released a software update for its Mac OS X Mavericks operating system on Thursday that features improved support for 4K displays, as well as other minor enhancements and bug fixes. As noted by Apple Insider, Apple’s latest Mavericks update had an unusually long beta testing period that lasted two months and involved nine pre-release builds. However, this was also the first testing period that allowed any Mac users to beta test the pre-release software through a new Beta Seed Program.

The improved 4K display support allows content that is displayed on 4K monitors to appear as sharp as it looks on the native Retina display screens for the late-2013 Mac Pro and the late-2013 15-inch MacBook Pro. Before the update, users that attached an external 4K monitor to their Mac’s running OS X 10.9.2 would only see content displayed on a larger scale with display elements spread out. The connected 4K monitor’s display refresh rate was also boosted to 60Hz. However, this update does not extend either enhancement to the 13-inch MacBook Pro model.

Besides enabling “pixel-doubled” display resolution for external 4K monitors on some Macs, the OS X 10.9.3 update also added “the ability to sync contacts and calendars between a Mac and iOS device using a USB connection,” according to Apple’s OS X Mavericks v10.9.3 Update support page. This feature was actually restored based on user feedback after it was replaced with iCloud synching in a previous release. The OS X 10.9.3 update also improves the reliability of VPN connections using IPsec.

As noted by Apple, the update resolved a minor bug “that prevented Font Book from installing PostScript Type 1 fonts.” The update also improved the reliability of “copying, editing and inspecting permissions of files on an SMB file server” and “network home directories.” Finally, the OS X 10.9.3 update improved “stability when installing configuration profiles” and boosted “login speed for users in Active Directory groups.”

The OS X 10.9.3 update also included Safari 7.0.3, the latest version of Apple’s Web browser. This update is widely believed to be the last update that Apple will release for the current Mavericks version before it introduces the next version at the upcoming Worldwide Developers Conference in June. According to insider sources cited by 9to5Mac, the Mac operating system is undergoing an “end-to-end redesign” that will align its appearance with the minimalist aesthetics of iOS 7.

As with most of its software updates, Apple recommended that all users install it after backing up their system. “It improves the stability, compatibility, and security of your Mac,” stated Apple. Alongside the OS X 10.9.3 update, Apple also released iTunes 11.2 on Thursday, with Podcast improvements and several bug fixes.