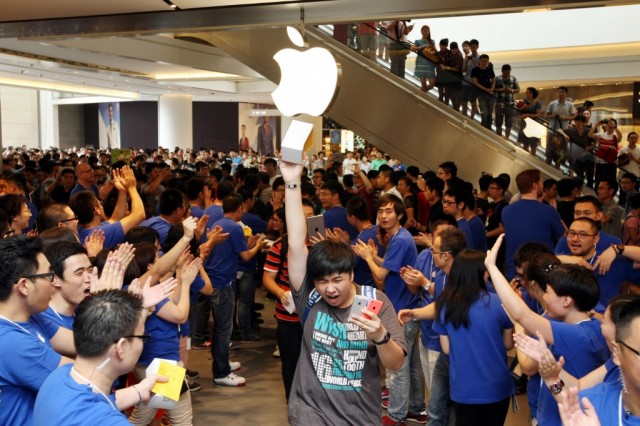 Apple shares closed at a new all-time high of $100.57 on Wednesday, June 20, topping the record that the iPhone maker set in September 2012.

In June of this year, Apple implemented a seven-for-one stock split gave every Apple shareholder of record six additional shares for every share held. Before the split, Apple’s record closing high was $702.10. However, after adjusting for the split, the previous record set in September 2012 was $100.30. Apple also hit a 52-week high of $101.09 in mid-afternoon trading on Wednesday. The share price boost gave Apple a market cap of $602.2 billion ahead of the company’s highly anticipated new product launches this fall.

Apple’s share price has climbed over 30 percent since the company reported its stronger-than-expected fiscal 2014 second quarter results in late April. Besides vindicating bullish Apple investors who dismissed concerns that the Cupertino-based company was falling behind Android-based mobile device makers like Samsung, the new stock high also suggests that investors have confidence in the iPhone maker’s upcoming lineup of products.

Apple is widely believed to be preparing to launch two larger screen iPhone models this September in response to the growing consumer demand for larger-screen smartphones. Multiple media outlets have reported that the so-called “iPhone 6” will be available in screen sizes of 4.7 inches and 5.5 inches. Several analysts have predicted that the significant screen size boost will drive a higher than usual spike in upgrades and attract new smartphone buyers who may have been holding out for a larger-screen iOS-based device. The latest rumors about the size of the production run for the iPhone 6 seems to suggest that Apple also shares this view. According to insider sources cited by The Wall Street Journal in July, Apple has told its suppliers to manufacture between 70 million and 80 million units combined of the larger-screen models before the end of the year, significantly more than the 50 million to 60 million units the company ordered for last year’s iPhone 5S and iPhone 5C launch.

Other rumors have suggested that Apple is preparing to enter the rapidly growing wearables market with a wrist-worn device that has already been dubbed the “iWatch.” The iWatch is rumored to feature multiple health-monitoring and fitness-tracking sensors that will collect data on everything from calorie consumption to blood pressure. The device is expected to be a key component for Apple’s recently unveiled HealthKit data storage platform. While the iPhone has long been the primary cash cow for Apple’s business, new products like the iWatch may become an important source of revenue in the company’s future.

At Re/Code’s first annual Code Conference in May, Apple SVP of Internet software and services Eddy Cue suggested that the products currently being developed by Apple would outshine previous trendsetting devices like the iPod and iPad. “Later this year…we’ve got the best product pipeline that I’ve seen at Apple in my twenty-five years at Apple,” stated Cue in a video of the conference provided by Re/Code. Although there is unquestionably a lot of investor and consumer excitement about Apple’s upcoming product releases, the share price ascent was also likely helped along by the company’s recent share repurchase program expansion.

In April of this year, Apple announced it was increasing the share repurchase program to $90 billion from the previously announced $60 billion level. Billionaire investor Carl Icahn, who has long been an advocate for Apple increasing its stock buybacks, epitomized the triumphant attitude of bullish Apple investors this week in a recent series of tweets. “About 1 yr ago we tweeted to our followers about our investment in $AAPL and that stock was ‘extremely undervalued,’” tweeted Icahn. “Believed $AAPL to be one of my ‘no-brainers’. Anyone that invested at that time would be up 53% (including dividends).”